Lumberjacks rebound with a 6-1 win over Team USA, head to Indy for a critical rematch with the Ice 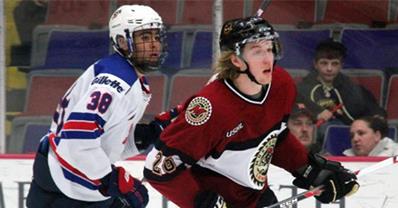 MUSKEGON – The Muskegon Lumberjacks understand the meaning of the term “must win.”

A night after playing one of their worst games in months in a five-goal, shutout loss to Indiana, the Lumberjacks looked like an entirely different team Saturday.

They fell behind by a goal in the first minute of the game, then came roaring back for an impressive 6-1 victory over the Team USA under-17 squad in front of 1,941 fans at L.C. Walker Arena.

The victory kept Muskegon tied for fourth place and the final playoff spot in the United States Hockey League’s Eastern Conference with six games to play. The Jacks have 58 points and remain tied in the standings with Green Bay, which also won Saturday.

Chicago, which was also tied for fourth, lost Saturday and fell into fifth place.

The Lumberjacks will travel to Indianapolis Sunday for their second matchup with the Ice this weekend. Coach Todd Krygier hopes Saturday’s win is a sign that they will play much better than Friday – and perhaps steal a very important win – in Indiana.

After Friday’s loss, Krygier declared the weekend’s other two games “must wins.”

“We’re going to go into Indy, change our game plan, give them a different look and hopefully play better,” Krygier said. “It’s not that we can’t compete with them. We can. It’s just a matter of how hard we’re willing to work.”

The opening minute of Saturday’s game looked like a frightening rerun of Friday’s contest.

After a flurry of shots on Muskegon goalie Jordan Uhelski, Team USA’s Ryan Wagner popped a rebound in the net to give his team a 1-0 lead just 59 seconds into the game.

But the Lumberjacks seemed to wake up after that. They didn’t score in the first period, but hit the post of the Team USA goal at least three times.

Muskegon finally cashed in just over a minute into the second period when Jack Rowe took a feed from Chris Dodero and popped a shot past Team USA goalie Mike Lackey.

Connor Wood added another goal for the Lumberjacks midway through the period when he fought through traffic in front of the net and stuffed a shot past Lackey.

The Lumberjacks took a 3-1 lead with seven minutes left in the second period when Rowe popped in a rebound for his second goal of the night.

The Lumberjacks onslaught continued in the third period with goals from Christian Wolanin, Matej Paulovic and Matt Iacopelli.

Iacopelli’s goal was his league-leading 38th of the season. Paulovic also had two assists for Muskegon.

The Lumberjack’s special teams were also much better than Friday, when they gave up three power play goals and scored zero. On Saturday the Lumberjacks were 2-for-3 on the power play, and kept Team USA from scoring on three chances.

“We did what I expected us to do tonight – we didn’t do that Friday night,” Krygier said. “Now we have to figure out how to get a win we’re not expected to get (in Indianapolis).

“Every game is important for us now. We’ve only got six left. It will put us in a real nice position if we find a way to win tomorrow night.”

Lake Hawks preparing for second season, including a January contest that will be broadcast on ESPN