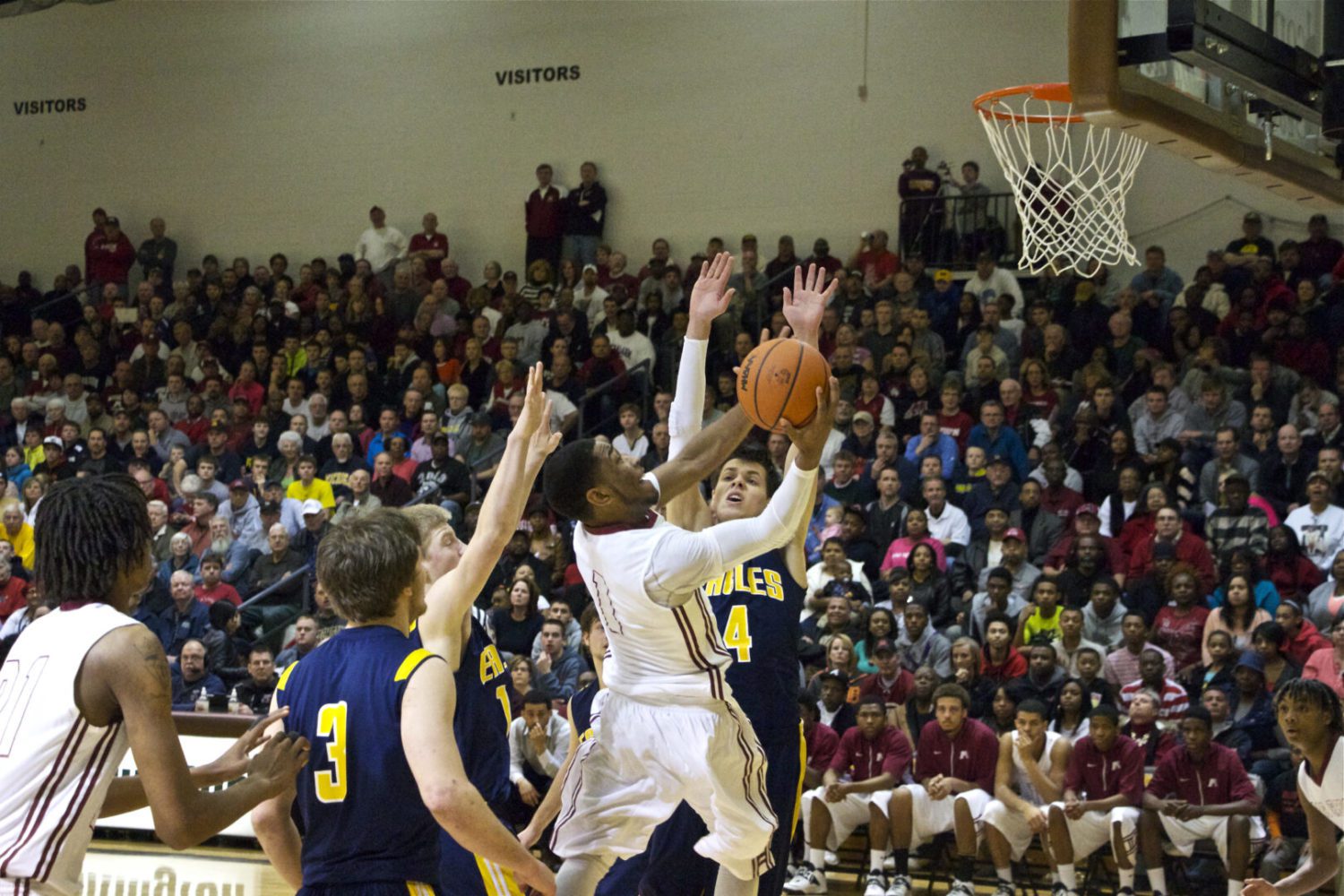 ZEELAND – It was a drastic turn of events Wednesday night at Zeeland East High School.

See, where Muskegon’s regional semifinal game Tuesday versus Northview, a 74-31 blowout in every sense of the word, was a testament to the Big Reds’ explosive dominance, Wednesday’s 56-48 win over Hudsonville spoke volumes about Muskegon’s will to finish the season with a Class A state title. 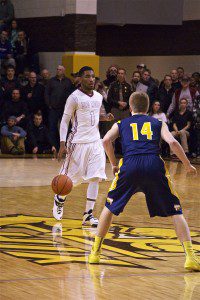 Deshaun Thrower dribbles the ball up the court for Muskegon. Photo/Jason Goorman

But the Eagles almost flipped the script, almost usurping the Big Reds’ fairy tale ending for one of their own.

“We don’t want any more close games,” said senior Big Red guard Jordan Waire, who tallied seven points, three assists and two steals in a good all-around effort. “Right off the top, our goal is to take everyone off of their game. We couldn’t do that tonight. It’s a credit to them. So we just kept working. If we wanted to get past them, we had to keep working.”

Going in, Muskegon head coach Keith Guy knew his squad had its work cut out for it.

“I didn’t expect Hudsonville to lay down for us,” he admitted. “They came out and played, and fortunately we had enough within us to pull out the victory.”

Yet, that almost didn’t happen.

One simple stat demonstrated the contest’s evenness: The first three quarters all ended in ties.

Muskegon (25-0) struck early, taking an early 7-2 lead; it looked as though things would continue on from Monday.

But a 7-2 Eagle run to end the first quarter pulled Hudsonville even at 11-all. Eagle junior forward Brent Hibbitts, who was brilliant the entire night, finishing with a team-high 18 points, scored eight in that stretch to key the comeback.

Though junior forward Joeviair Kennedy started the game defending against Hibbitts, junior guard Jason Loera came in off the bench to play several quality minutes versus Hibbitts, giving up just two points to the Eagle junior. 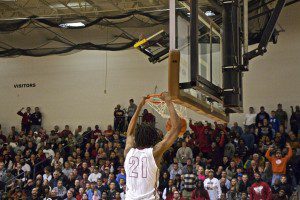 Loera knows and embraces his role on the Big Reds.

“My role was to come off the bench and provide a spark,” said Loera. “I’m out there to get stops and get this team going.”

Just as often, though, the Eagles dictated the pace of the game, matching Muskegon’s dominating balance with high-powered outside shooting and very solid passing and movement overall.

“We knew they hit a lot of jump shots,” said Loera. “That’s what we worked on in the scouting report. Then it was our job to come out and execute.”

But, for once,  the Big Red defense looked almost human – instead of  its typical super human status.

But Muskegon hung in there. Mr. Basketball candidate Deshaun Thrower kept his team in it, scoring seven of the last 11 points of the half to pull his squad even at 24-24.

Thrower looked every bit the best player on the court, finishing with a game-high 28 points. 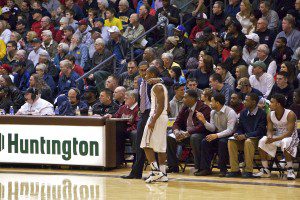 Yet, Coach Guy had a message for his team at the break.

“I thought we were a little too tight,” said Guy. “Other than Deshaun (Thrower), I thought the other guys were a little tight. I told them to take some deep breaths and relax.”

After a back-and-forth third quarter, it was Waire’s turn to make a mark, pulling the Big Reds even at 40-all scoring his team’s final seven points of the third, including a three-pointer at buzzer.

It was in the fourth where Muskegon showed its true colors, holding the Eagles to 3-of-13 shooting from the field while hitting 10-of-16 free throw shots to pad the scoreboard and escape with the win.

While there were several pivotal moments of the contest, one might be considered the call of the game. Late in the fourth, after a time out and with Hudsonville taking out the ball, Guy surprised the Eagles by putting his Big Reds into a zone defense. Hudsonville struggled with the switch, wasting valuable seconds in the process, and the Eagles’ perfect shot never materialized.

In fact, the Eagles missed their final seven shots of the game.

“We weren’t surprised at all,” said Loera. “We knew we were going to have to come out and play. It will be that way every game until the end of the tournament. We will have to play the way we can if we expect to win. We’re glad it worked out for us tonight.” 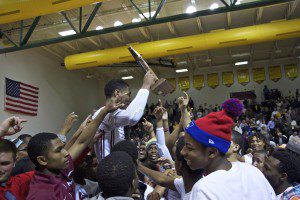 Now the Big Reds will take a much needed break, having just capped a stretch of five games in 10 days.

“First of all,” Guy explained, “we’re going to catch out breath. We got a couple days off before our next contest, so we’ll kind of collect ourselves, relax, get our bodies back, and then we’ll start thinking about our opponent.”

Muskegon will actually get a jump start on the winner of the other regional game – between Ann Arbor Skyline and Kalamazoo Central. Their regional final contest was postponed until Thursday night due to  weather.

“It gives us another chance to scout a little bit,” said Guy.