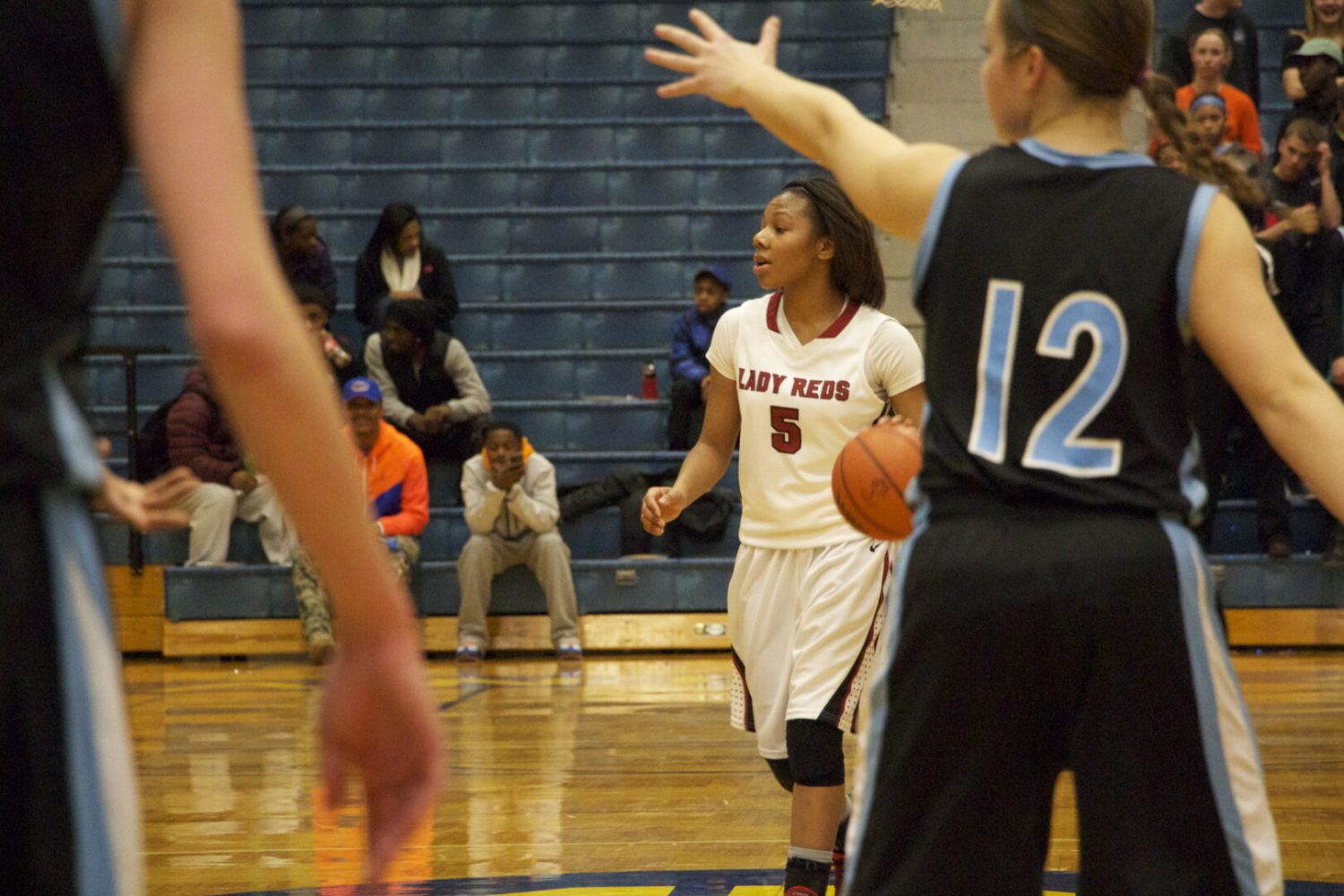 GRAND HAVEN – The Muskegon girls basketball team has been riding a wave of emotion and effort for much of the season, scoring exciting wins over Reeths-Puffer and Mona Shores to nab the district title, and then over Greenville Tuesday evening, to advance to Thursday’s regional final versus Grand Rapids Christian. 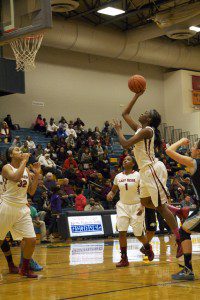 Mardreika Cook scores two of her 25 points for Muskegon as No. 1 Kierra guy and Jade Page look on. Photo/Jason Goorman

It had been an almost unparalleled season for the Big Reds, matched only by the school’s 2002 squad, of which current Muskegon head coach Taushauna Burrell was a member.

That team fell in the regional final game.

And so did this year’s team.

But it wasn’t due to lack of effort or want that ended Muskegon’s season but a dominant inside game by the Eagles, led by senior center Haley Muller and junior backup Rachael Warners. The duo scored 18 and 16 points, respectively, mainly from put backs and close shots from the post. Muskegon played well, just not well enough to best the Eagles.

“I knew it would be a battle,” said Burrell following the loss. “I thought our bigs could have countered their bigs, but some things just didn’t go our way, we just couldn’t get clicking like we normally have. It happens.”

After an even opening four minutes, Christian opened up a 14-5 lead en route to the 18-10 lead after one.

The Big Reds stayed in it in the second because of senior Janiece Levelson and sophomore Mardreika Cook, as each scored six apiece in the frame to keep Muskegon close.

But time after time, the Eagles were able to push the ball inside. And when they couldn’t, players like Eagle senior Hayley Reitsma benefited, scoring all nine of her points in a one minute stretch, with a layup, a three-pointer, and a three-pointer-and-one. 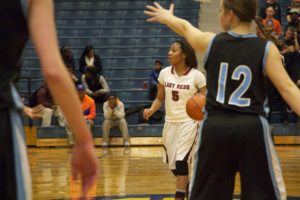 Raven Moore takes the ball up the floor for Muskeogn. Photo/Jason Goorman

The wheels came off for Muskegon in the third quarter. After making their first two shots, the Big Reds failed to connect on their next 17 shots, while the Eagles’ Warners scored eight points from the post to lead her squad to a 55-34 edge.

Muskegon kept it close as Cook unleashed an 11-point explosion. It was a sign of the future for a Big Red team that seems to have turned the corner and could field competitive teams for many years to come.

Burrell wanted to focus on this year’s team, though, and its historically deep run into the playoffs.

“To God be the glory,” said Burrell. “It was a faith-based season for us. Not just believing in an entity but believing in each other. I’m excited for what’s down the road, and I’m extremely proud of this group of girls, especially the seniors, all year long. But I tell them all the time that this about more than just about basketball. This is a lesson we’ll all learn from. After the buzzer sounds, life goes on.”

Cook led all scorers with 25 points, while Levelston poured in 15, and seniors Kierra Guy and Jade Paige added nine and six points, respectively, in the loss. 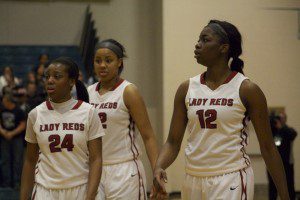 No. 24 Janiece Levelston, Jade Page and Mardreika Cook check in for Muskegon during a break in play. Photo/Jason Goorman

Jocelyn Taylor added 10 points for the Eagles.Christian advances to take on Grand Ledge (23-2) next Tuesday in the state semifinal at DeWitt High School.