Holt and Holt: Muskegon Catholic brothers form one of the best pitcher-catcher combos in the state

MUSKEGON – Nick Holt was outstanding as a freshman pitcher for the Muskegon Catholic baseball team in 2012.

But last year he was even better, posting an almost inhuman 0.59 earned run average and gaining first team All-State honors. 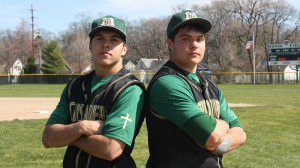 What was the difference between his freshman and sophomore seasons?

But he also got a boost when a familiar face appeared behind home plate in a catcher’s mask.

Jacob Holt, Nick’s brother, moved up to varsity as a freshman last season and immediately became the starting catcher.

Nick Holt admits it’s was nice to have his personal catcher back.

That’s not surprising, since the two of them have been playing some form of baseball with their father, Mike Holt, since they were big enough to walk.

They’ve been pitcher/catcher battery mates since they were seven or eight, playing in the Roosevelt Park little league.

Nick has also been pitching to Jacob every summer since their early teens, when they started playing for the West Michigan Riptide elite travel team.

“I think it’s a special kind of gift to have a brother who’s been my catcher all these years,” said Nick Holt, a junior left-hander who is already drawing a lot of interest from college baseball programs.

“He knows me better than anyone. He knows all my pitches and how they move, and he’s the only one who knows if I’m going to do a pickoff move or bring it home. I know I can throw it just about anywhere and that guy on first isn’t going to second, because the ball doesn’t get past him very often.

“I haven’t seen a better catcher on any team we’ve played.”

Jacob says Nick is easy to catch because he has good control and doesn’t get flustered on the mound.

“He always keeps his composure and his stuff has good movement,” said Jacob Holt, a sophomore. “He doesn’t have to throw in the high 80s, because he changes speed and has so much control over his pitches, he still gets people out in the low 80s.

“I know everything he’s thinking on the mound.” 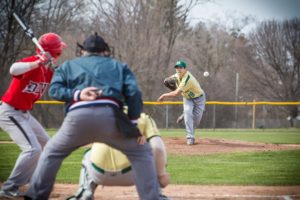 Their mutual respect seems real, and it’s certainly justified, but what about the arguments?

Everyone knows pitchers and catchers sometimes scrap over pitch selection or strategy.

And everyone knows teenage brothers typically fight about everything.

But the Holts say they keep it professional on the field, and if discussions are sometimes necessary, they happen at home.

“We definitely have our disagreements, but we work it out because we put the team ahead of ourselves,” Nick Holt said. “On the field, it’s the best place to be. There’s no reason to fight. We’re having fun, playing a game we love, and we want to win every possible game we can.”

It would be difficult to find a pair of brothers who have made such a difference for one high school team, particularly at such young ages.

Last season Nick Holt posted an 8-0 record with the 0.59 ERA  with 63 strikeouts in 59 2/3 innings. A high point in his season came when he pitched a no-hitter in the Division 4 District finals.

Jacob Holt is a defensive specialist behind the plate. He threw out 4 of 7 base stealers in the first six games this season, and picked four runners off base.

Both brothers also bring big bats to the lineup. 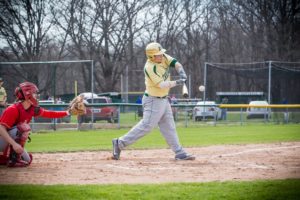 Jacob Holt hits a 2-run single against Holton  during the 2013 season. Photo/Tim Reilly

They both showed off their offensive skills last weekend in the MCC Invitational.

In a 17-3 win over Montague, Jacob Holt had three hits, including a home run, and six RBI. Nick Holt had two hits and two RBI.

In a 10-0 blanking of Spring Lake, Nick Holt had two hits and two RBI while Jacob Holt had a triple and knocked in three runs.

Their skills have helped the Crusaders maintain one of the top baseball programs in the area.

MCC advanced to the Division 4 state semifinals in 2012, when Nick Holt was a freshman. Last season the Crusaders won the River Valley Conference and advanced to the regional finals, with both brothers on the team.

“Both of those guys are very physically mature,” said MCC baseball coach Steve Schuitema, who has Mike Holt, the boys’ father, serving as an assistant coach. “Nicholas is 6 feet tall and weighs 185 pounds, while Jacob is 6 feet tall and weighs about 220. Their dad got them started in the weight room at an early age, and they are among the strongest kids on our football team.

“Nick is very fast running – he runs a 6.8 60-yard dash – and is a threat to steal at all times. Jacob is more of a gap hitter, but he also runs very well for a big kid.

“We have several good baseball players on our team this year, but Nick and Jake will be big keys to whatever success we have.”

This season the Crusaders are off to an 8-1 start and expect to have another outstanding season. They only last two seniors from the 2013 squad, which means they have the depth and experience to challenge the top teams in the state.

“We’re basically returning everybody,” Nick Holt said. “We can go as far as we want. Of course we’ll  have to have some things go our way. You always need those lucky breaks any time you make a run, but I think we have as good a shot as anybody to go to state.”

The bad part has been the weather. The players had to wait and practice in the gym for weeks on end as game after game was cancelled due to the lengthy winter.

Finally they decided they had enough, and a group of players, coaches and parents got out their rakes and shovels and prepared their home field ready for action.

That effort allowed MCC to play two games before spring break, something few teams in West Michigan managed to do.

“We were just in the gym, all the time, that’s all we did, because it was too cold outside,” Nick Holt said. “We worked on the field because we were just really interested in playing outside again. There were about 40 to 50 people there working. We added new additions to the dugouts that look great.”

A year without Ford Field magnifies our past football glory