Now it comes down to one game.

It’s the Muskegon Lumberjacks vs. the Green Bay Gamblers Saturday night at L.C. Walker Arena, with the winner qualifying for the Clark Cup playoffs and the loser going home for the season.

The Lumberjacks did their part to arrange the showdown Friday night, beating the Chicago Steel 3-1 at the Chicago Edge Arena in Bensenville, Illinois.

The victory kept the Lumberjacks in sole possession of fourth place (and the final playoff spot) in the USHL Eastern Conference, heading into Saturday’s finale. The Jacks (30-24-5) now have 65 points, one point ahead of Green Bay.

The race for the final playoff spot included four teams heading into Friday’s games. But the Lumberjacks came in with a one-point lead over Chicago, and knocked the Steel out of the race by beating them.

Team USA came into Friday two points behind Muskegon and did its  best to stay alive by beating Sioux City. But the Lumberjacks also knocked Team USA out of the race, because the best the Ann Arbor team could do is tie Muskegon in the standings, and the Lumberjacks own the tiebreaker (head-to-head record between two teams).

That leaves only Green Bay standing between the Lumberjacks and the playoffs, which begin next week.

The Lumberjacks are 1-3-1 against the Gamblers this season. Puck drop Saturday is 7:15 p.m.

The Lumberbacks came into Friday’s game with a sense of trepidation, having won only one of four games against Chicago this season. But they took command early and never trailed in the critical contest.

Matt Iacopelli gave the Lumberjacks a 1-0 lead by scoring his league-leading 41st goal nearly four minutes into the first period. Christian Wolanin got the assist.

Jack Rowe gave Muskegon a 2–0 lead with a goal at the 17 minute mark of the first period. Chris Dodero and Adam Larkin were credited with assists.

The Lumberjacks sealed with win with an empty-net goal by Trevor Morbeck with 20 seconds remaining in the contest. 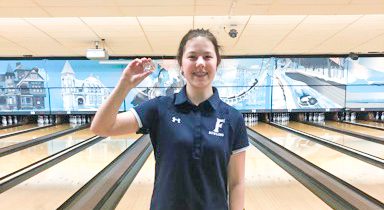