Muskegon legend Earl Morrall: As humble a superstar as you’ll ever meet

MUSKEGON – The news – the death of Earl Morrall – caught me by surprise a little bit today.

It probably shouldn’t have.

Earl always had a classy attitude about him everytime our paths crossed. The fact the former Muskegon High School three-sport athlete had slipped physically at the age of 79 and passed away quietly somehow seemed appropriate. 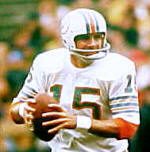 Afterall, he never specialized in bringing attention to himself.

The first time our paths crossed occurred in the mid-1970s when Morrall returned to Muskegon one summer and ran a football camp at Camp Pendalouan.

Even as a long-established pro, he always had time for people, even for young print media reporters and football campers.

The Miami Dolphins had the heralded unbeaten season in 1972, and everybody remembers Bob Griese as the team’s standout quarterback. What most forget is Morrall played in, or started, 12 of those games because of an injury to Griese. At any time, the run could have ended, but Morrall always found a way to get it done.

Griese returned in relief in the American Football Conference championship game and then for the Super Bowl, but we doubt the Dolphins would have been in bad shape with Morrall still at the helm.

Asked about it, Earl said he didn’t like it and then moved on. Winning as a team remained the most important thing to him. He had an outstanding career at Muskegon and then led his 1955 Michigan State University squad to a Rose Bowl victory before turning pro.

Yet, that was the way Earl was. Low-key. He stayed a quiet pro in all phases of his life.

Years later, he would take a phone call and talk about different topics. One call concerned his time as a volunteer coach in 1979 at Miami of Florida, where he worked with a young quarterback by the name of Jim Kelly, later a longtime star with the Buffalo Bills.

You never heard or remembered Earl bad-mouthing people. He just did his own thing. Asked once at what age he would want his own son to play tackle football, he said somewhere around junior high school. He believed football was a tough enough game physically he didn’t want his own son to be a 10-year veteran of tackle football by the time he got to his sophomore year in high school.

The amazing thing is Earl’s strange ties with the Detroit Lions. After being a first-round draft choice from MSU in the 1956 National Football League college draft, he spent one season with the San Francisco 49ers before being swapped first to the Pittsburgh Steelers and a year later to the Lions.

The reason? The Lions had won the NFL title in 1957 even though starting quarterback Bobby Layne had gotten hurt and didn’t finish the season. Tobin Rote won that title, and then the Lions sent Layne, who played without a facemask in those days, off to the Pittsburgh Steelers.

Who came back in return? Morrall. 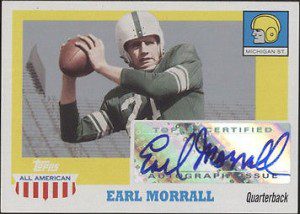 After six years in Motown, Morrall moved on and eventually wound up playing 21 seasons in the NFL. Detroit apparently didn’t feel it could win with him so that’s why they moved him on, and yet he ended with three Super Bowl championship rings — two in Miami and one from his days with the Baltimore Colts in the late 1960s.

Now, to us, he’s the ultimate example of the Lions since the 1957 season.

The ultimate (fantasy) Lions player and coaches’ reunion would have four rooms. In the first room will be everybody who wants a championship for Detroit – there were three in the 1950s.

In the second room would be everyone who played for the Lions, but they still had played for a team that won a Super Bowl title during their career. Morrall might have the most rings (3) in that room. He wore the 1972 Super Bowl ring when he was at Camp Pendalouan, as I recall.

The third room would be for everyone who played for the Lions, moved on, and at some point, at least played in the Super Bowl either before or after their stint in Detroit.

The fourth room? That will be for everyone else. They played for the Lions, usually hard, but their efforts never helped Detroit get to the promised land. Who’s in there? Guys like Barry Sanders, Lem Barney and Charlie Sanders and others like them.

In which room would you choose to hang out? Probably the one with Earl Morrall.

Just think of the stories he could tell on how to win. And to think it all started in Muskegon’s historic Hackley Stadium.

That’s the nice thing about Morrall. He was hometown all the way, even when his career took him elsewhere.

Thanks for the memories, Earl. We will miss you.

Coming Sunday: Jim Moyes offers another perspective on the life and career of the legendary Earl Morrall exclusively at LocalSportsJournal.com