Former Lumberjack Cullen Hurley will play college hockey at the University of Wisconsin, beginning next season 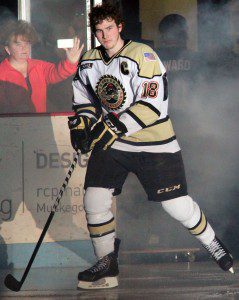 Muskegon Lumberjack forward Cullen Hurley has committed to spending his collegiate career with the Wisconsin Badgers.

The Eagan, Minn. native wrapped up his United States Hockey League career in Muskegon this season with 12 points (two goals and 10 assists) in 55 games.

“The way that Wisconsin runs its hockey program along with the style of play they offer really attracted me to the school and ultimately made my decision much easier,” said Hurley. “Their coaching staff knows how to groom their players into competitors that compete for potential national championships.”

Hurley will begin his Big 10 hockey career in the fall. Wisconsin recently closed out its season with a first-round loss to North Dakota in the NCAA tournament.

“Not only do they have an elite hockey program, but their academics are also first-rate,” said Hurley. “I believe that they can help take my game to the next level.”