MUSKEGON – Nobody should be surprised that Cap Pohlman’s baseball team is fighting for a league  championship, and has qualified yet again for postseason play. 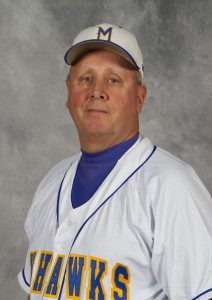 The Muskegon Community College Jayhawks have hovered near the top of their conference standings for most of Pohlman’s 16-year career.

Pohlman’s teams have only recorded one losing record in all those seasons. They have qualified for regionals – which is limited to the top six teams in the 14-team league – 13 times in 16 years.

The coach celebrated his 500th career victory a few weeks ago, and has an overall record with nearly 200 more wins than losses.

But the manner in which Pohlman and his staff have kept MCC winning is truly amazing. The Jayhawks play in a conference with several colleges that invest a lot of money in baseball scholarships – far more than MCC can afford.

But somehow the Jayhawks keep attracting quality players, with little to offer in terms of financial assistance.

And somehow they go nose-to-nose with the Goliaths of the league and often come out on top.

“Scholarship money is not equal for all the schools in the league,” said MCC Athletic Director Marty McDermott. “We work with what we have. Cap has done a tremendous job working with limited resources. He deserves a great deal of credit for overcoming a lot of those obstacles.”

The Jayhawks’ split a doubleheader with Jackson Community College Sunday, leaving their current record at  31-16 overall and 17-5 in conference play.

They have a one-game lead over Delta College and a two game lead over Grand Rapids and Kellogg. They have four regular season games remaining – a doubleheader at Ancilla College on Tuesday and another twin bill against Kellogg Community College on Thursday. If they win all four, they will be the outright conference champions.

It would be the second league title in Pohlman’s career.

MCC got off to a rough start this season, posting a 4-7 record in early season play in Myrtle Beach, South Carolina near the end of February. But there was a silver lining.

They played a lot of southern teams that had already been playing for quite some time. Going head-to-head against talented and experienced opponents exposed the areas that the Jayhawks needed to work on.

They came home to bad weather and had a lot of games canceled, so they stayed in the gym and focused on improving their weak points for much of March.

When the season picked up in April, they won their next nine games, and haven’t slowed down very much since then.

A big part of the team’s success has involved the offense. Several Jayhawks are having outstanding seasons at the plate. 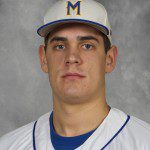 “We have been pretty consistent at the plate,” Pohlman said. “We get a lot of walks, we have a lot of  power in the lineup and we run fairly well. There have been times when we have just exploded.

“If pitchers are not able to throw first strikes, this team makes them pay. We can hit the ball pretty hard.” 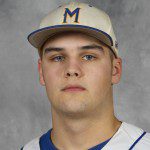 Pitching was a much bigger concern coming into the season. The returning sophomore pitchers didn’t gain as much experience as they needed as freshmen  last spring, due to a weather-shortened season, and this year’s freshmen were largely unknown quantities.

But three hurlers have stepped up and given the Jayhawks the type of pitching they need.

One is sophomore Nick Keller, who didn’t see much action last year, but has posted a 7-0 record with a very low 1.44 earned run average, 35 strikeouts and 10 walks.

“Lawson was one of our top recruits, but Proctor was a surprise,” Pohlman said. “We recruited him as a third baseman. We knew he could pitch, but we had never seen him.

“In this game you look as good as your pitching. That’s just the way it is.” 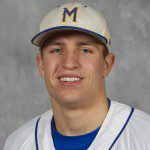 While clinching the conference crown would be great for the Jayhawks, Pohlman seems more interested in the upcoming regional tournament in Battle Creek, slated for May 14-18.

The Jayhawks will be seeded first in regionals if they win the conference. The regional tournament champion will advance to the NJCAA Division 2 national tournament in Enid, Oklahoma.

Perhaps that is so important because, for all of their success, the Jayhawks have never qualified for nationals.

“We’ve never been there,” Pohlman said. “If you’re going to win a regional (and advance to nationals), you need a deep pitching staff, because these are nine-inning games (as opposed to seven), which is a concern for us.

“If the pitchers perform well we will have as good of a chance as anybody.”

Success on an uneven playing field

Pohlman, 61, grew up in Saginaw and played baseball at Central Michigan University. He was drafted as a pitcher by the Milwaukee Brewers, but was forced to end his minor league pro career after two seasons due to an arm injury.

He started coaching baseball at Chesaning High School, then became a pitching coach for several years at Miami University (Ohio).

He moved to the Muskegon area in 1992 when he accepted a job as a social studies teacher at Fruitport High School. He coached baseball at Fruitport for four seasons, served as an assistant coach at Spring Lake High School for one year, then became head baseball coach at MCC in 1999.

His first team at MCC finished just below .500, but every team since then has posted a winning record.

Pohlman reached a major milestone April 24 when he collected his 500th career victory at MCC.

Actually it means he’s a very skilled coach, with a 506-309 career record to prove it.

And as Pohlman points out, the Jayhawks have been successful while competing on an uneven playing field.

Several colleges in their conference, including Grand Rapids, Jackson and Kellogg, allow their baseball teams to accept donations to finance scholarships, and many seasons have as many as 24 players on scholarship.

MCC operates with 4 1/2 scholarships per year, according to Pohlman. That means many outstanding high school seniors are out of reach every year, so Pohlman and his staff have to search extra hard for undiscovered talent.

“I have never gotten a player that (Grand Rapids or Kellogg) were interested in,” Pohlman said. “We have to recruit in places where they don’t go. Those kids want a chance to play college baseball and there are no community college programs around.

“We really have to beat the bushes, but there are good kids out there.”

Despite the lack of scholarships to offer, the Jayhawks continually attract strong players. That’s probably because they want to play for a successful program and reputable coach.

“We’re getting far more Muskegon players than when I started,” Pohlman said. “They want to come to MCC. We’re also getting more kids from all over the state. We currently have 5 or 6 players from Brighton. When you have success with one kid from a town like that, the word gets around.”