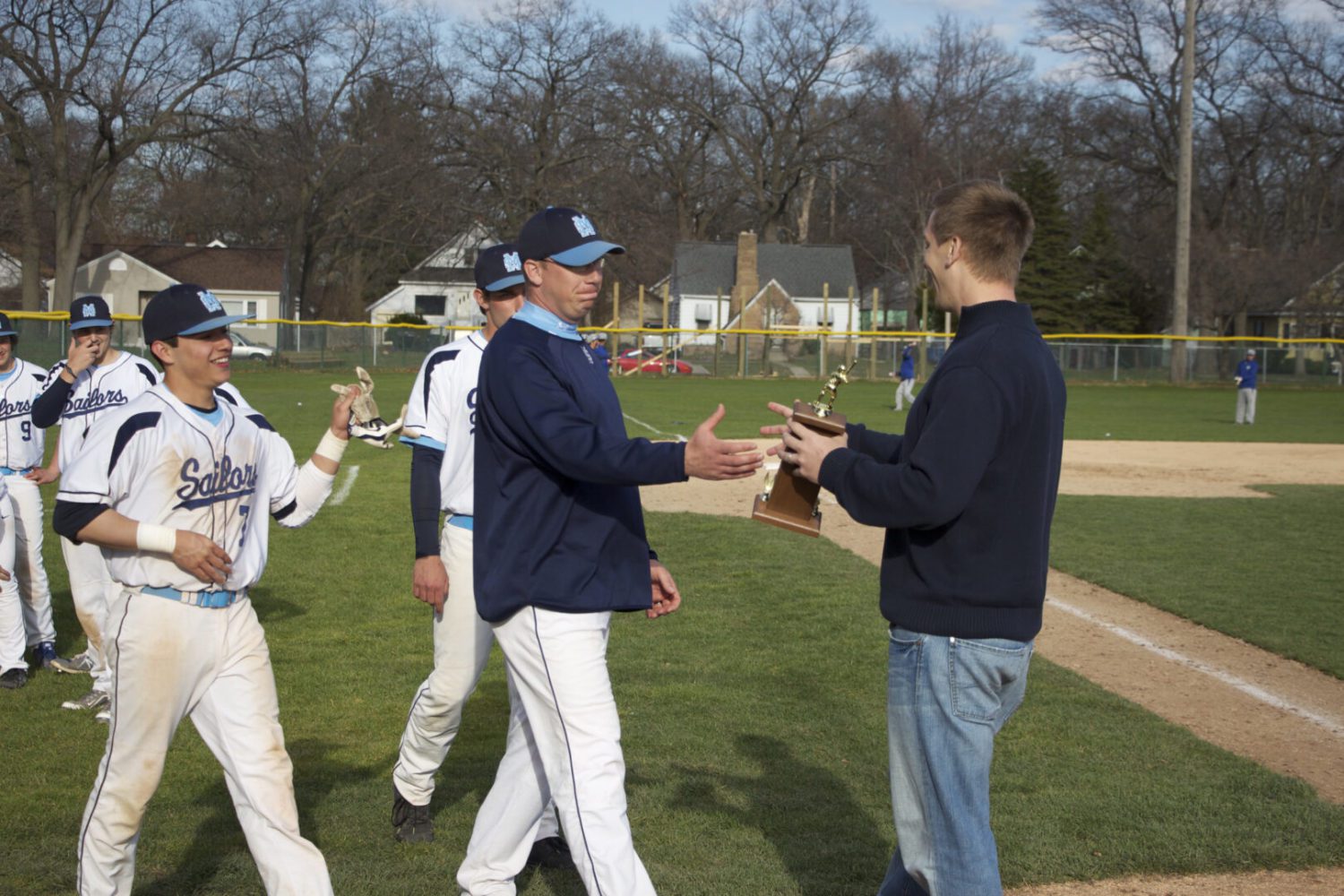 MUSKEGON – The Mona Shores Sailor baseball team has struggled all season with something that is in fact out of its control.

At least that was the case until Saturday’s Greater Muskegon Athletic Association city Tier 1 baseball championship game versus rival Reeths-Puffer (7-4).

Though the squad suffered through some misfortune earlier in the game, the Sailors’ fortunes changed in their final at-bat in the seventh inning.

Down 6-5, Mona Shores DH Dugan Dieselberg smacked a pop up that float back down to the mound. Although Reeths-Puffer had several guys in position to make the catch, it fell unmolested to the ground, scoring Tyler Trovinger to knot the score at 6-6.

One extra inning later, Julian Loera singled in Hunter Broresma to hand the Sailors the 7-6 win and the title.

Loera was waiting for his pitch.

“First pitch I was thinking fastball,” said Loera of his final at-bat. “The last two hitters, (Reeths-Puffer pitcher Joe Champoux) he gave them (a) fastball first pitch. I just pulled it.”

“I think the baseball gods made it even for us,” said first-year Sailor head coach Bill Lent. “That’s maybe the first time all year that we finally caught a break. It went in our favor and helped us get back on the good side. Usually, we don’t catch the breaks and it just piles on from there. Maybe the baseball gods evened one out for us.”

It almost wasn’t so.

The Rockets seemed to have the win in hand after being on the receiving end of a little lady luck itself, scoring the go-ahead run after Caleb Sheffer doubled, advantaced to third on an errant throw to second, and then scored after the ensuing throw to third went wide.

But from that point on, Noah Dykstra and Ryan Bramer combined to pitch two-and-a-third scoreless innings, quieting what had been a very explosive Rocket offense.

“Ryan Bramer came in on short notice and just shut them down,” said Kent. “That’s going to be our strength all year. I hope we use this as a catapult to see that’s our strength and we can win with that.”

The Rockets started hot, tagging Trovinger for two first-inning runs, a double off the bat of Tyler Moss. But it could have been much worse for the Sailors, as Trovinger then loaded the bases.

But the senior pitcher Trovinger got a strikeout to end the inning.

Shores came to life in the third, as Broresma banged a double to lead off, and then scored from third on a pass ball. Loera scored after a wild throw to third, and then a bases loaded walk and a single gave the Sailors the 5-2 lead.

The Rockets’ Sheffer answered in the fourth with RBI double, followed by RBI singles from Colin Houseman and Parker Richardson to tie it 5-5.

Then came what appeared to be the Rockets’ winning run, and then the drop near the mound to give the Sailors new life.

“It’s tough, you know,” Reeths-Puffer head coach Tim Schuppe said of the miscommunication. “We’ve got a freshman third basemen, freshman short stop, but we battled. We came out and fought all day.

Lent was elated for his senior batter, one of only two seniors on the Sailor roster.

““He’s a kid who has battled,” said Lent of Loera. “(He’s) gone through rough times, hit hard balls right at people. For him to finally break through…you couldn’t write it up better.”

To win the tournament in his first year of coaching, after an uneven start, clearly was important to Lent.

“I don’t know how to put it into words,” he said. “Playing here, I never got a chance to win one of these. In fact, I lost one on the mound one year. So to come back and have one now, as a head coach…This one is a little more special.”

The Sailors advance to the finals after defeating Whitehall 3-1 and Orchard View 15-5 in five innings, while the Rockets dispatched Muskegon 22-1 and Fruitport 6-1.

Muskegon Lumberjacks skate past Team USA with 4-1 win, next head on road to Chicago