MUSKEGON – Beka Shepherd and Aliza Olson do a lot of crucial things for the Oakridge girls soccer team. 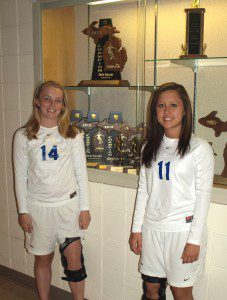 But they’re not big goal scorers, so they don’t get a lot of attention – at least until they’re missing from the lineup.

Last year, when Shepherd and Olsen were juniors, the Eagles were flying high. They were coming off a Division 2 state semifinal appearance in 2012, and thought they might have the talent to go all the way in 2013.

But Shepherd went down with a torn ACL in the conference championship game, and Olsen was hit with the same injury a week later in the district finals. Their seasons were over.

Their teammates played on without them and advanced to the regional finals, but finally lost to Detroit Catholic Central.

Oakridge coach Jeff Lohman isn’t sure what would have happened if they had been healthy, but he knows his team would have stood a better chance.

“What really hurt is that we did a poor job throughout the season preparing the girls to play in different spots on the field,” Lohman said, explaining his effort to replace the injured players.

“Plus we had girls who were used to playing 15 minutes a half had to play the majority of the time. It really hurt us quite a bit.”

Shepherd and Olsen say it was awful to sit and watch, knowing they couldn’t help their teammates fight for a state title.

“The fact that we couldn’t help our team in regional finals felt really bad,” Shepherd said. “I really think we could have gone to state. We had the talent, we had good passing and we took good shots.”

This spring brought a new opportunity for Shepherd and Olsen, the only two seniors on the Oakridge squad.

After surgery and a long winter of rehab, both say they’re back at full strength and ready to help an Eagles maintain their long record of excellence.

Oakridge has won seven West Michigan Conference titles since 2005, including the past two seasons.

But Shepherd and Olsen provide leadership in different ways. They’re not going to carry their team with the points they put on the scoreboard, because neither of them does that very often.

Olsen, a center midfielder, has 29 goals and 12 assists in three-plus seasons while Shepherd,  a defender, has 15 goals and 14 assists.

But they are involved in just about every other aspect of the game, playing crucial roles on both ends of the field.

They both play in the offensive zone, due to Lohman’s unique system of throwing all 11 players into the offensive attack. The team tries to rely on ball control, because it lacks natural goal scorers.

“We try to get our defenders involved with creating our attack,” Lohman said. “It allows us to get more numbers forward and hold the ball in the attacking zone. It’s pretty high risk, but pretty high reward.

“Aliza sets up the attack in midfield – she’s a great passer – and she’s good off the ball. Beka is our main girl for restarts. She takes a lot of our direct and corner kicks. She’s involved in every single one and gets a lot of assists.”

With all 11 players in the attacking zone, it’s critical that they retreat quickly and set up to play defense when the other teams attack.

That’s when Shepherd and Olsen are at their best. Their defensive skills are evidenced by the fact that Oakridge has posted 37 shutouts in games they’ve played since their freshman year.

Having two of the top athletes on the team focus on defense is by design, according to Lohman.

“It kind of drives the assistant coaches crazy sometimes, but I like to take the better athletes and put them on the back lines,” Lohman said. “That’s just the style we play.

“Beka has been the anchor of our defense since she was a sophomore, when we went to the state semifinals. She not only plays well individually but directs traffic. All the girls know where to be when she’s out there. And Aliza is just a good all around player, good on the attack and good on defense.”

Shepherd volunteered to play defense as a freshman and has been happy there ever since. But Olsen came to varsity with her heart set on scoring goals, which did not fit Lohman’s plans.

“I think it took Aliza three years to realize she’s a good defender,” Lohman said. “We knew it right away, but she didn’t want to play there.”

Olsen admits to being offensive-minded, but her desire to help her team is clearly more important.

“My whole thing is I love the feeling of scoring,” she said. “But as time went by I realized (playing center midfield) is better for the team. I’m okay with it now. I actually like playing defensive midfield now.”

With Shepherd and Olsen back in the lineup, and six other starters returning, Oakridge entered the season with high hopes.

But the Eagles have not played as well as expected, posting a 6-2-1 record, with loses to Orchard View and Holland Black River.

Lohman thinks the losses with be good for his team in the long run.

“It’s taken them a little bit to get going,” he said. “I think maybe the girls had a feeling at first that they don’t have to work as hard.”

Shepherd and Olsen agree with their coach, but are confident things will turn around.

“We have a lot of talent – it’s just a matter of finishing goals,” Shepherd said. “We keep possession a long time. The final third is where we need to get it together.”

“We’re starting to connect,” Olsen said. “Communication is a big part of it, and we’re finally starting to talk.”