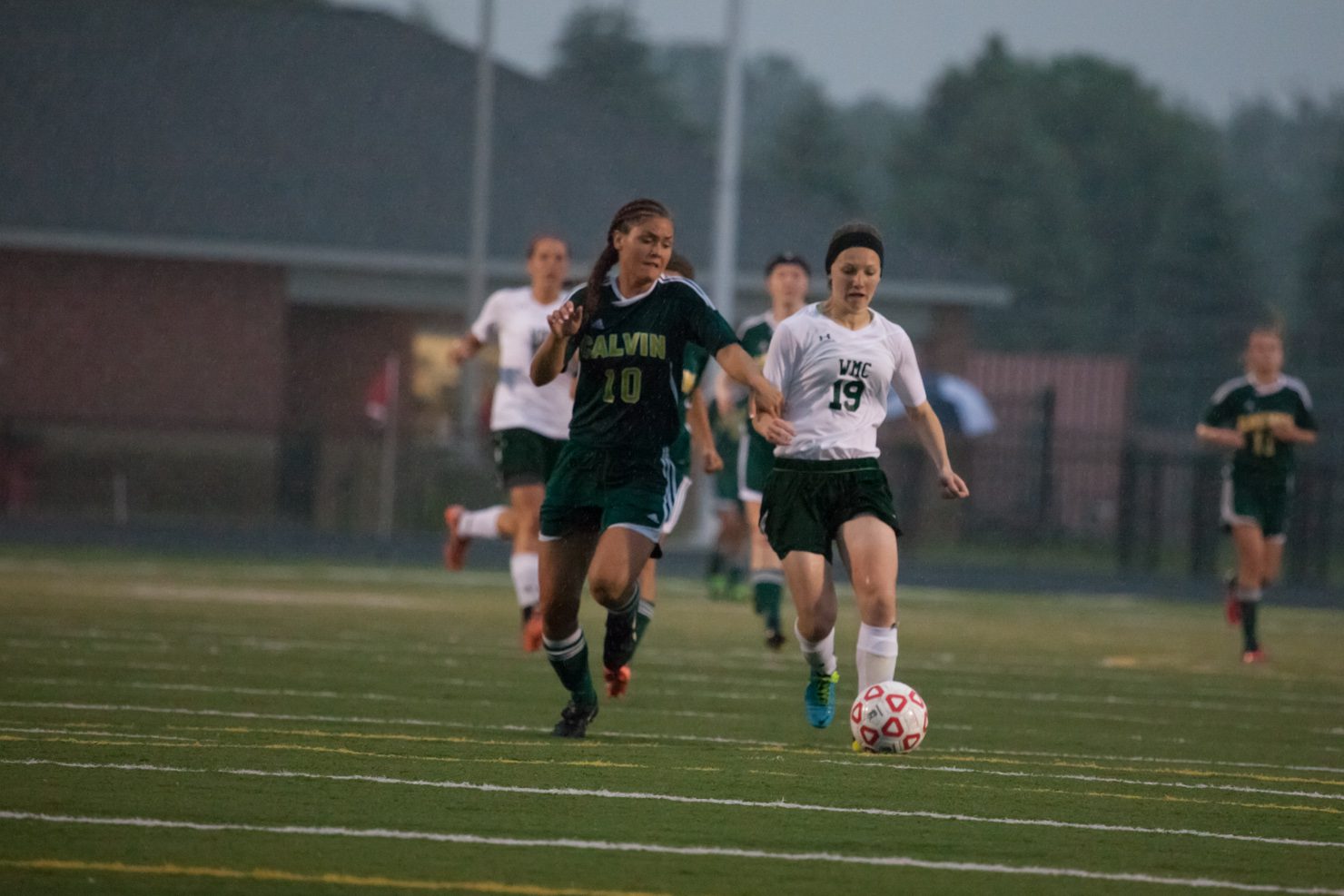 CEDAR SPRINGS – Western Michigan Christian gave it a shot on Wednesday night, but for the third straight season, saw its soccer season end at the hands of Grandville Calvin Christian.

In the Division 4 state semifinals, the Squires erased a 1-0 halftime deficit and claimed a 3-1 victory and a spot in Saturday’s state title game against Waterford Our Lady of the Lakes/Clarkston Everest, a 6-1 winner over Lansing Christian. 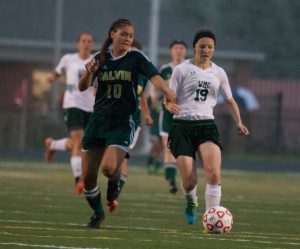 “The better team won,” WMC coach David Hulings said. “And when I say that, I am not taking an ounce away from my girls. They worked their butts off and gave them a competitive game.”

Lightning struck more than once on Wednesday night. The first bolts came just prior to the start of the game and delayed the 7 p.m. start until 8 p.m.

“You can tell who gives a better halftime speech since they came out with two goals right away,” Hulings said. “They are a great team and Tim (TerHaar) is a great coach.”

WMC scored first and it proved to be the lone goal of the opening half. Senior Alyssa Benedict rolled a pass through a Squire defender and onto the foot of a streaking Alexys Riksen. The junior outran the final Squire defender and slipped a shot past goalkeeper Allison Keizer. That goal came with 23:37 remaining in the first half.

It was the first goal Calvin Christian had allowed in the tournament and just the sixth all season.

“We kind of wanted to lull them forward because we weren’t attacking and it was working because they were right in our net and so we moved Alexys forward,” Hulings said. “We hit a ball and Alexys was on and there it was. But, you’re only going to do that once a game. There was no hope to do that again. You’re going to surprise Tim once and then after that, they never sucked back up again … so we did what we wanted to do. We lulled them and got a goal, but after that, I should have gone back to our possession game and possessed with them.”

While WMC had the lone goal in the opening half, Calvin Christian put Warrior goalkeeper Lindsey Johnson to work. The junior keeper made several solid saves and also got some help from the crossbar to keep the Squires off the board.

Calvin’s best chance in the first 40 minutes came with 2:42 left on the clock . Hilary Curry got loose in front of the Warrior net and fired a low shot that Johnson smothered.

“I think it’s fair to say we were a little unlucky not to have a goal by halftime,” Calvin coach Tim TerHaar said. “We hit the woodwork a couple of times. That being said, Lindsey Johnson, had a couple fantastic saves and just had a standout night on a tough night to be a goalkeeper.”

But then came the fateful opening minutes of the second half.

Sarah Klunder fired a low shot from 25 yards out that caught inside the far post and hit the back of the net.

Just 1:12 later, Klunder’s well placed corner kick produced a scramble in front of the WMC net and ended when Curry tapped the ball into the net.

Several other Squire shots produced solid saves from Johnson or rang off the crossbar.

Riksen had another solid scoring chance with 9:05 remaining, but her shot rolled just wide of the net.

Then came the game-clinching goal. The scoring play started with Natalie Honeycutt possessing the ball near the end line and sending a centering pass to the goalmouth. Hannah Van’tHof deflected it in for the final goal of the game.

For the Squires, it’s off to the state finals again.

“Third time in a row and it was not without an absolute battle,” TerHaar said. “We knew Western Michigan Christian was a great team and that they would bring it. And, you know, it was a game to the dying minutes.

“It was just a great showcase of high school athletes laying it on the line,” he said. “We couldn’t be prouder of moving on after beating a great team.”

“I have to get our program where it needs to be so we can compete and not walk off this pitch crying every time,” said Hulings, is already looking forward to another shot at the Squires next season.

McCollum, Smith each score goals as Reeths-Puffer gets by Wyoming, 2-0