Nadel, a 63 years-young major league announcer for more than 35 years, has a plaque hanging in the Baseball Hall of Fame after recently receiving the Ford C. Frick Award for Excellence in Broadcasting. 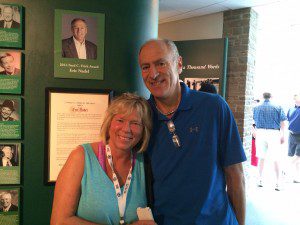 Nadel stands with wife Jeannine at the Hall of Fame.

Asked if it still surprised him, Nadel said, “Yes. It does. I still view myself as just a guy doing what I love to do for a living, not the kind of luminary who receives this type of honor.”

Nadel received the recognition during the recent Hall of Fame Induction ceremonies in Cooperstown. And in today’s modern era, he never knows where a request for a “shout-out” fan may come from — the Middle East or Alaska. He said one never knows on a given day.

The Brooklyn native had visited the Hall of Fame as a youth and a day short of 50 years later, he was standing on the diamond in the middle of Doubleday Field receiving the career-type honor.

For a Brown University grad who started his announcing career in Muskegon covering the old Mohawks of the then-International Hockey League in 1972, it’s an amazing accomplishment. Nadel spent three seasons in Muskegon and later went to Oklahoma City and Dallas before an out-of-the-blue call came from the Rangers to try out as a young announcer for them.

The person asked if Eric had ever broadcast baseball. “Of course I did,” Eric replied, then he added in the speech “Which was a complete lie.”

Eventually he survived the four-game audition with the Rangers and started his way up the baseball broadcasting ladder in 1979.

“It’s mind-blowing, especially when the other names and photos (for the Frick Award) are those of Mel Allen, Red Barber, Vin Scully, Ernie Harwell and my other idols,” said Nadel. “It’s still hard for me to include myself in that company.”

Nadel attended the festivities in Cooperstown along with his wife Jeannie, other family members and longtime friends. He still marvels at the way the Hall of Fame Weekend works. 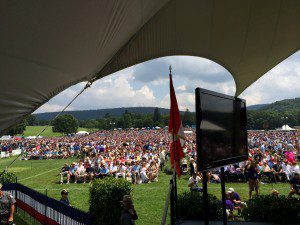 A view of the crowd from the stage at the recent Baseball Hall of Fame ceremony.

“I was surprised at how incredibly smooth everything ran … considering there were nine honorees, each having dozens or hundreds of guests, not to mention the 50,000 or so fans,” he said. “The organizational ability of the Hall of Fame staff was extraordinary.

“Also, the atmosphere at the Otesaga Hotel, where only the Hall of Famers and their families could stay, was unlike anything I have ever experienced. No autographs. No press. It was really like being a member of a private club.”

He said his acceptance speech hit the suggested 10-11 minute limit, and it wound up being telecast nationally on MLB Network. During it, Nadel tied in his family history like listening to Mel Allen do the play-by-play for a New York Yankee baseball game on the car radio in the 1950s while traveling with his dad, a dentist.

Amazed when told that Allen was paid to do that, Eric recalled saying, “You mean instead of filling cavities and pulling teeth, he goes to Yankee Stadium and watches baseball games? I like his job a lot better than yours!”

A few minutes later in his speech, Nadel said, “so I knew what I wanted to do. The question was how do I get there? I took the usual route to the majors. I announced minor league hockey.”

He did part of his acceptance speech in Spanish to honor the portion of the Rangers’ fan base and later touched again on his hockey background.

“For all the other play-by-play announcers out there … major league, minor league, college and high school,” Nadel said. “To those who have not won this award or made it to the big leagues … and for those who gave up on ever getting there.

“Remember, I am a converted hockey announcer, and I once was told that my voice wasn’t good enough to make it as a play-by-play announcer. If I can make it all the way to Cooperstown, there is hope for everyone.

“On two occasions, I was one lucky phone call away from giving up this dream … packing it in and going to law school. I can just hear myself … ‘Today’s closing arguments are brought to you by Ballentine.’ I don’t think I would have made a very good lawyer, and I certainly would not have been a happy one. “