He vividly remembers the old days, attending games with his family and friends and cheering for the local teams in the 1970s, 80s and 90s – whether it was the old Muskegon Mohawks, Lumberjacks or Fury.

It was something he missed as an adult when he moved to Missouri and later Massachusetts. And he happily reclaimed his fan status when he moved back to Muskegon in the early 2000s. 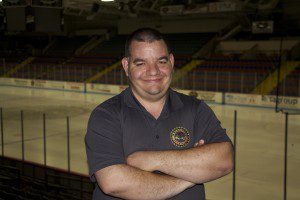 But last winter DeVowe became more than a fan. He took a part-time job in November, helping the modern-day Lumberjacks with group ticket sales.

He did so well, and showed so much enthusiasm, that the Lumberjacks hired him full time as sales director last February, luring him away from a longtime job at Lorin Industries.

Now DeVowe is working hard to fill the seats at Lumberjacks games in the rapidly approaching 2014-15 season.

For DeVowe, it’s more than just a job. It’s a cause he believes in, because he loves Walker Arena and the long, proud history of hockey in Muskegon.

“This is a mission for me,” DeVowe told Local Sports Journal. “I want to help save the arena. It’s so important for Muskegon, but if we don’t use it, we will lose it. And I want there to be hockey at the arena for my kids to enjoy when they are my age.”

The Lumberjacks are entering their fifth season in the United States Hockey League, an elite training ground for some of the top amateur players in the U.S.

Many of the players are committed to major universities, and many have been drafted by National Hockey League teams.

The Lumberjacks open training camp Aug. 27. The regular season begins with a road game in Ann Arbor Sept. 26, with the home opener slated for Saturday, Sept. 27 against the expansion Madison Capitols.

DeVowe is different than some older Muskegon hockey fans. While some continue to mourn the loss of minor league pro hockey at the arena, DeVowe said he was sold on the talented teenage players the minute he saw the USHL Jacks on the ice.

“This is the best hockey I’ve seen in this community for a long time,” DeVowe said. “If more fans would take a look, they would see this for what it is – a training ground for the next big stars in the sport.

“If they don’t believe that, they need look no further than the Detroit Red Wings’ (and Mona Shores graduate) Justin Abdelkader. He played junior hockey in this same league. He won the Clark Cup in the USHL with Cedar Rapids as a junior player, won a national championship at Michigan State, then hoisted the Stanley Cup in his first season with the Red Wings.

The Lumberjacks did not have a great season at the gate last year, averaging 2,208 fans per game, third from the lowest in the 16-team USHL.

But the crowds started getting bigger toward the end of the season. The Lumberjacks had more than 2,500 fans in the stands six times in the final two months, including three games with more than 3,000.

Part of the reason is that the team got hot and won a lot of games in the closing weeks of the season. And it helped that DeVowe was rushing around the area, approaching groups and convincing them to give the Lumberjacks a look.

“I was on an all-out dash, telling everybody and anybody ‘I want to see you at the games.’ “

In the past, Lumberjack season ticket sales efforts were rather quiet in the offseason, and most of the sales were made in the final few weeks before the first game, DeVowe said.

But this year has been different. DeVowe and his staff have been hitting the streets all summer, attending community events, talking to individuals and doing their best to drum up interest and sell season tickets.

Last year the club sold about 615 season tickets, and most sales came in the annual late summer rush, DeVowe said. This summer the club has already sold half that amount, and DeVowe expects to smash last year’s mark when the late rush is counted.

He’s been marketing the team throughout West Michigan. There are no boundaries for Lumberjack ticket sales, as far as he’s concerned.

“My biggest wins so far this year have been three different families – from Lowell, Ionia and Grand Rapids – that all bought season tickets,” DeVowe said. “We tell people that we know money is tight, but we want them to know that any money they invest in this team is making a difference in these young player’s lives and helping them achieve their dreams.”

Slow ticket sales over the past few years may have been related to the team’s lack of success on the ice. The Lumberjacks struggled through their first four seasons and have yet to reach elite status in the league.

But that could very well change this year, with the anticipated return of more than a dozen players from last year’s squad, including Matt Iacopelli, the league’s defending goal scoring champion who was recently drafted by the National Hockey League’s Chicago Blackhawks.

“There is an incredible passion in this organization to win the Clark Cup,” DeVowe said. “We want to be the best.”