How fitting it is that this year’s Local Sports Journal high school football preview section (print form, available now at Plumbs and other local retailers) cover story revolves around the amazing turnaround at Shelby High under the guidance of head coach Lorenzo Rodriguez.

Many of our readers might be surprised to know that it was Shelby’s 1977 undefeated team that was the first of our area teams ever to represent our area in the playoffs. The Tigers would then have to wait another quarter of a century before returning to the coveted playoffs in 2001. 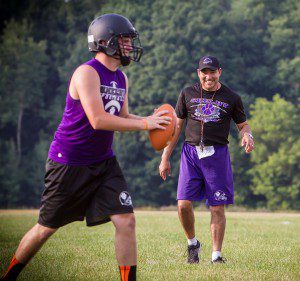 Coach Lorenzo Rodriguez has led Shelby from the bottom of the WMC to elite status  over the past few seasons.

Under Rodriguez’s expert guidance the Tigers are now seeking their fifth straight appearance in the “late fall” classic, and their second straight solo championship in the very competitive West Michigan Conference.

Shelby met their rivals from Hart High in the opening year of this now potent football conference on Nov. 11, 1932, to determine who would be the first outright champs in the WMC. Not only was nothing decided on that historic occasion, but no points were even tallied during the afternoon battle that ended in a 0-0 tie and a two-way deadlock for the conference crown.

North Muskegon dominated the early years of the WMC, but until Shelby moved to the forefront in recent seasons, this powerhouse conference as been led by state title teams from Ravenna, Oakridge and Montague.

Our proud area has witnessed a multitude of high school gridiron turnarounds over the years, including as recently as last season when Reeths-Puffer and Mona Shores made huge gains. Once powerful Reeths-Puffer brought back memories from decades past by posting a 7-2 record, their most successful season since the 1990s.

Under second-year coach Kyle Jewett, R-P reached the playoffs for only the 2nd time in the new millennium. It has been quite a playoff drought for the Rockets, who are seeking their first playoff victory since winning a state title back in 1992.

Mona Shores made history last season by qualifying for the playoffs for the first time in school history. The 2013 season was the first six-win campaign for the Sailors in more than 30 years. They have only won as many as eight games in one season (1968).

Mona Shores and Reeths-Puffer fans might want to mark Oct. 10 down on their calendar when these two upstarts face off in a contest that could very well determine if one, both, or neither of these teams return to postseason play.

Shelby, Reeths-Puffer, and Mona Shores aren’t the only teams that have experienced a  huge turnaround over the many decades of exciting high school football on the local scene.

Even perennial powers like Muskegon and Muskegon Catholic have experienced a few dips over the course of time.

The decade of the 1960s was a forgettable one for both the Crusaders and the Big Reds.

The Crusaders were vying for a mythical Class A state championship late in the 1959 season, before losing to rival Grand Rapids Catholic 6-0 in freezing temperatures in mid-November.

Just three years later, in 1962, the Crusaders experienced their only winless season in history.

Except for a few minor hiccups over the ensuing decades, the Crusaders have created a dynasty, with yet another banner season forecast this year for the defending Division 8 state champs.

Muskegon has been a model of consistency in this century, making the playoffs in every season since 2000, winning three state titles, and finishing as runner-up twice.

Ironically, Muskegon’s gloomiest football era closely followed that of Muskegon Catholic. Muskegon had little success on the gridiron from 1958-1963, but there was one common denominator for the turnarounds at Muskegon and MCC – Roger Chiaverini.

Chiaverini became coach of the Big Reds in 1964. So swift was the Muskegon turnaround that Chev’s Big Reds were undefeated in just his second and third seasons at the helm.

The Hall of Fame coach surprised many local follo wers when he left Muskegon to take over at nearby Muskegon Catholic following the 1970 season.

‘Chev’ certainly didn’t leave the cupboard bare for his successor at Muskegon High, longtime JV coach Larry Harp. In his initial season following’s Chiaverini’s move to MCC, Harp guided the Big Reds to a perfect 9-0 campaign and the mythical Class A championship.

After nine very productive years under Harp, the Big Red program swiftly reached the depth of despair when Harp’s young replacement, Mike Cieslak, went a woeful 8-19. At that point Athletic

Director Harp called on (begged might be a better word) his former assistant, Dave Taylor, to take command of the Big Reds.

The rest is history. The Big Reds have since rolled to five state titles and a pair of runner-up finishes under Taylor, Tony Annese and current head coach Shane Fairfield, with no dropoff projected in the forseeable future.

Chiaverini delivered the same magic at MCC as he did for the Big Reds. Although he failed to win a playoff state title, his undefeated 1974 Crusaders were a unanimous choice as mythical Class B state champs, just one year before the playoff system was adopted.

Will this upcoming 2014 season see another team make a turnaround, much like R-P and Mona Shores experienced in 2013?

There are a number of area teams due for some good fortune.

Since winning it all as recently as 2004, Orchard View has seen a huge drop-off in wins.

It has been eight years since once mighty North Muskegon has played a 10th game on their schedule. Fruitport has taken a slight step backwards of late.

However, if ever there was a team that cries out for a turnaround season, it would be the Pirates of once mighty Hart High.

It has been nearly 10 years since the Pirates have won as many as four games over the course of an entire season!  Seventeen years have now passed since Pirate fans have even enjoyed a winning season, and never have loyal Hart boosters seen their team even once enter the playoffs.

How this ‘old-timer’ would love to see the Pirates be this year’s turnaround team!

Hang tough Pirate faithful. This longtime WMC follower wishes you nothing but the best.