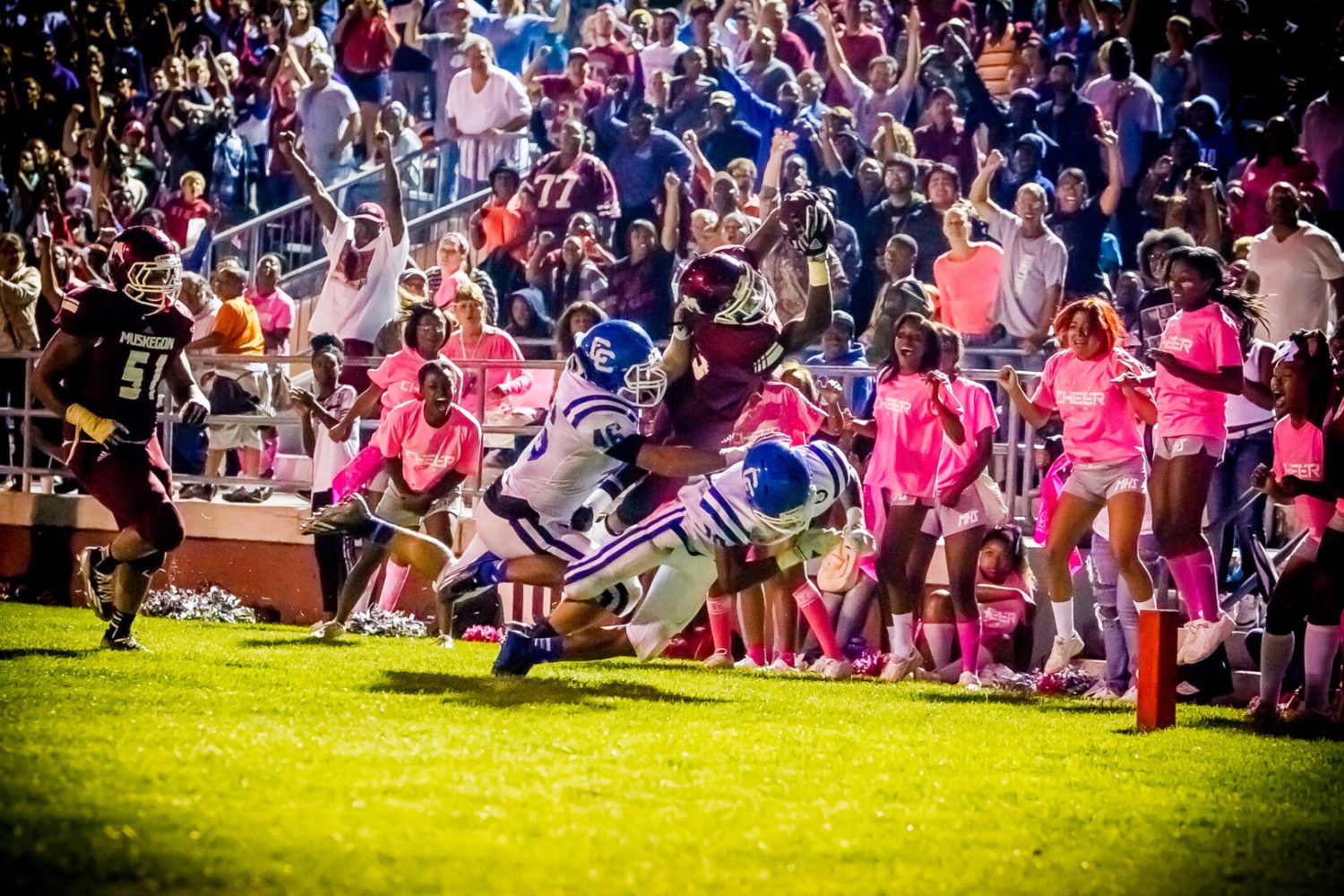 And they don’t come much bigger than the Big Reds’ thrilling 21-14 win against state power Detroit Catholic Central Friday night at Hackley Stadium. 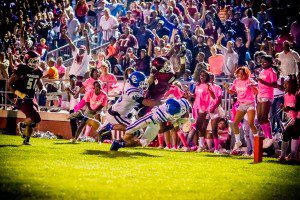 Alezay Coleman stretches out and reaches the end zone to put Muskegon on top for good. Photo/Tim Reilly

“Win or lose we knew we’d be a better team after this game. Detroit Catholic Central made us a better football team tonight. It gives us a boost of confidence,” Fairfield said.

The pregame hype was worth every snap between the talented teams, with both coming off state runner-up finishes last season in their respective divisions.

The Big Reds broke a 14-14 tie and sealed it with one big back-breaking play – Alezay Coleman took a pitch from quarterback Shawn Pfenning and sprinted 40 yards down the left sideline for the winning touchdown with 1:29 remaining.

The Shamrocks put together two first downs in a final drive, but it ended at Muskegon’s 45-yard line as the clock expired.

“It was a hard-hitting football game from beginning to end,” said legendary DCC coach Tom Mach. “They did what they had to do to beat us. It’s hard to stop that option the first game of the year. We’re young. Each week, we’ll get better.”

Perhaps nobody answered the bell better than Pfenning. The senior quarterback made his first varsity start after replacing graduated standout Deshaun Thrower and responded with a pair of touchdown runs.

Pfenning completed 6-of-9 passes for 45 yards, while rushing for 63 yards on 11 carries and two scores. 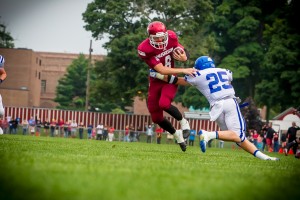 “For him to score two touchdowns, hopefully that will put the critics to rest,” Fairfield said.

The game was tied 7-7 at halftime and the pace picked up in the fourth quarter.

Pfenning gave the Big Reds a 14-7 lead on a 1-yard run early in the fourth quarter. His score capped an impressive 16-play drive that covered 90 yards and included some key runs from workhorse back Caleb Washington.

Pfenning admitted he was nervous early, but settled down throughout the game.

“It feels good,” Pfenning said. “It was my first game and I got us the win. It takes a little pressure off me. They hadn’t been scored upon in the first game the last 5-6 years.”

The Shamrocks never quit and kept charging behind quarterback Joseph Fanning. He silenced the large home crowd when he lofted a perfect 31-yard TD pass to Victor Dirita on fourth-and-13 with 3:07 remaining.

But the Big Reds never flinched and responded with Coleman’s winning TD run.

Muskegon had two turnovers and DCC converted a fumble into its first score on Fanning’s 1-yard TD run early in the second quarter. 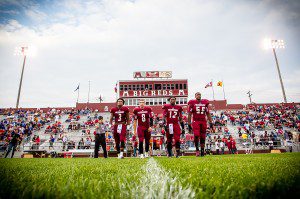 Muskegon totaled 310 yards, including 250 on the ground in 42 attempts.

“We made first-game mistakes but the kids didn’t slump or hang their heads,” Fairfield said. “They just kept playing and fighting and they overcame.”

Washington was the workhorse back carrying 20 times for 109 yards.

Fairfield was pleased with his defense that allowed 209 yards and shut down DCC’s power ground attack. Fanning completed 6-of-17 passes for 143 yards, while the Shamrocks managed just 66 rushing yards.

Top tacklers for the Big Reds were A.J. McClanahan Jr. with seven, Taran Smith and Rowland Sharp II with six apiece and Khari Cunningham with five.

Fairfield knows Friday’s celebration will be brief because Grand Rapids Christian pays a visit to town next week.

“We have a lot of work to do,” Fairfield said. “This game means nothing if we come out against Christian and lay an egg.”