MUSKEGON – There’s a saying Dereko Riley lives by each day.

It’s an inspirational line from rapper Chief Keef and it goes like this: “Baby, you know how I’m rocking.”

What does it mean? 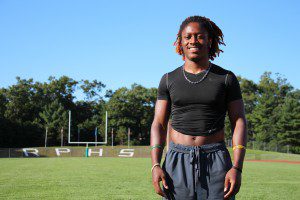 R-P’s star running back Dereko Riley will be pulling for his teammates from the sidelines. Photo/Jason Goorman

“It means you know what I am and what I do, but you never know what to expect when I make an appearance,” said Riley, Reeths-Puffer’s standout senior running back and cornerback.

Ironically, Riley is not expected to make an appearance when his Reeths-Puffer teammates host Holland in their first game of the season Thursday night. In fact, he’s not expected back in the lineup until Week 4 against Lowell.

When he does finally get to play, he will be welcomed with open arms by coaches, teammates and Rocket fans throughout the area.

And his appearance will be welcomed with great anticipation by coaches, teammates and Rocket fans.

Riley is still rehabbing a nagging hamstring injury that started last spring during track season, then was aggravated at a University of Michigan summer football camp.

For Riley, it’s been frustrating. It’s been unfair. And it’s been a tough way to test his patience as the Rockets launch the season without him.

Still, Riley (5-5, 160) faithfully shows up at practice with a good attitude, his infectious smile and a new early-season role.

“I won’t be in the first few games – at least I won’t be in there physically,” Riley said. “But I have to be there mentally and teach the younger players. I’m basically an assistant coach at the moment.

“This gives me motivation. When I get back I will go hard. I expect to be better from the training.”

Riley enjoyed a solid junior season for the Rockets, who finished 7-3 with their first state playoff berth in years.

He rushed for 805 yards and 10 touchdowns, while catching 11 passes for 203 yards and two scores. He was also an all-conference selection as a defensive back with 56 tackles.

“I don’t know how else to describe a kid who can change directions without slowing down,” Jewett said. “He has vision and sets up his blockers. He has that skill. He’s fast (4.5) and strong (300 bench).”

Jewett said Riley has handled the hamstring situation with a good attitude.

“This is an obstacle he didn’t anticipate or expect,” Jewett said. “There’s only one way to handle it. You can sulk or you can focus on the recovery program.

“He’s vocal in practice,” Jewett added. “We say when he comes back that we expect him to pick up where he left off last season. We’re hoping (he’s back before the Lowell game). He’s such a great kid.”

Some of Riley’s best friends these days are the athletic trainers who work closely with him to get him ready for his return.

In the future, he’s hoping to play college and professional football. Plan B for Riley is studying sports medicine and pursuing athletic training as a career.

Jewett said Riley initially will only play offense when he appears back in the lineup. Eventually, playing both ways again will be the goal.

Riley believes the Rockets will pick up where they left off last season, even without him in the early going.

Riley says he prays a lot and asks for healing of his hamstring.

And he often has vivid dreams in his sleep of rushing for 200 yards per game – when he makes an appearance.

“I dream it before I do it,” Riley said. “I expect to be something big when I get back.”