RAVENNA – Kaleb Cook and his teammates don’t like to talk about Oakridge’s season opener in football.

For the record, the Eagles were trounced by state power Grand Rapids West Catholic 31-0.

“Everybody didn’t believe in us after the West Catholic loss,” Cook said. “But we believed in us and the coaches believed in us.”

Oakridge fans are definitely believers after the Eagles defeated West Michigan Conference rival Ravenna 36-20 Friday in a showdown at Citizens Field. The Eagles (4-1, 3-0) won their fourth straight and spoiled an undefeated season for the Bulldogs (4-1, 2-1).

Oakridge, which faces Shelby next week, will square off against unbeaten Whitehall in two weeks.

“It means a lot because our next step is to win the conference championship because that is our goal every year,” said Cook, a talented two-way lineman and emotional senior leader. 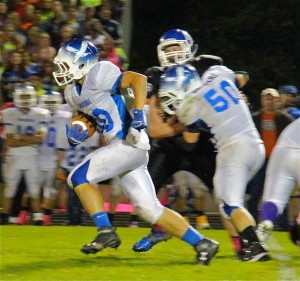 “We are right where we want to be,” Oakridge coach Cary Harger said. “Our kids have the goal of being conference champs. We just missed out on it last year. It left a bad taste in our mouths and we want to get it back this year, absolutely.”

Oakridge, which relied on big plays, led 28-7 at halftime against the Bulldogs.

The Bulldogs, however, relied on a big play on their first snap when quarterback Nick Castenholz and Alex White hooked up on a 44-yard TD pass for a 7-0 lead. But the Eagles reeled off 28 straight points and never lost the momentum.

“Our kids responded very well in coming back and getting some points on the board themselves,” Harger said about the game-opening TD by Ravenna. “We adjusted to what they were doing. Our kids played super.”

Oakridge regained the lead on a 2-yard run by Kristoffer Bagge and then hit two big pass plays – an 83-yard TD strike from quarterback Brady Luttrell to James Cooper and a 56-yard connection to Jaeger Beattie for a 22-7 lead.

Those big plays were telling in the physical contest and the annual “Cancer Game,” which honors victims and survivors tied to both schools.

“It wasn’t anything we weren’t ready for,” Ravenna coach David Smith said about the big plays. “I wasn’t disappointed in the kids’ effort. I thought we fought hard tonight, but I’m disappointed in those big plays in the first half because we were prepared for them.

“I don’t know if the game was too big for a minute and we got that deer in the headlight look and lost all focus in our responsibilities. That’s what happened. And their guys made the plays. We didn’t execute and that is the name of the game in football.” 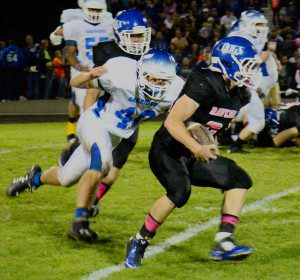 Ravenna’s Justin Jones on the rush as Tyler thomas prepares to make the tackle for Oakridge. Photos/Jason Goorman

Oakridge’s defense also had a huge stop late in the first quarter when Cook sacked Castenholz on a fourth-down play from the 8-yard line.

Ravenna came back with a key score in the third quarter when Gabe Zimmer ran 7 yards up the middle to cut the margin to 28-14.

That momentum was short lived as Oakridge hit another big play on its next snap – a 73-yard TD run from Kolin Chahorski right up the middle for a 36-14 lead at the 5:14 mark.

Ravenna managed one more score when backup quarterback Dakota Hudson lofted a 26-yard TD pass to David Thompson in the left side of the end zone early in the fourth quarter.

Oakridge also lost starter Nate Wahr, who suffered a blow to the helmet and left the game on a stretcher in the third quarter.

Luttrell, a gutty sophomore, completed 6-of-8 passes for 237 yards. Chahorski sparked the ground attack with 177 yards on 15 carries.

Justin Jones led a balanced Ravenna ground attack with 91 yards on 14 carries, while Zimmer finished with 43 on eight carries. 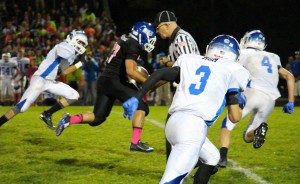 Castenholz and Hudson combined to complete 4-of-10 passes for 96 yards.

Blake Hammond led the Ravenna defense with seven tackles, followed by Bronson Leutzinger with five and Jesse Eckhardt with four.

Alex Hutfilz had eight tackles for Oakridge, followed by Tyler Thomas with seven and Cook with six. Chahorski also recorded an interception.

Oakridge and Whitehall appear to be the league favorites heading down the stretch. Harger likes being in that position, especially after the early setback to West Catholic.

“We told the kids from get go after that loss those are mistakes we can fix,” Harger said. “We told the kids we had to fix those things and take care of business. We knew we were young, but talented.

“It’s just a matter of getting those kids big-game experience. The kids are huge competitors. It’s kind of like you call them out and they rise to the challenge. They can’t wait to compete week in and week out.”