Friday, it means the Grand Haven Buccaneers will host the Reeths-Puffer Rockets in the annual “Bucs Pride” with the home team again wearing purple jerseys for the 7 p.m. game, but it’s just part of an ever-expanding operation.

“It’s also about remembering those we’ve lost,” said Sharon Yonker, one of the main organizers for the non-profit foundation whose main purpose is to raise awareness about cancer. “It’s not about how much money we collect. It’s getting the awareness out there.”

In doing that, the idea has spread to other sports teams like the Grand Haven golf team wearing purple shirts for a meet. Overall, Bucs Pride tries to involve district students at every level. Yonker said almost every sport has become involved at Grand Haven, too.

One of the goals now is to have each of the nine schools in the Grand Haven system take a month and have a collection of snack items for distribution to chemotherapy centers for their patients on the last Friday of every month.

Yonker has a couple personal reasons for her involvement. Her father, the late Gene Rothi and a former Grand Haven High School football coach, died of melanoma while she also lost a 37-year-old daughter to cancer.

“I’m just passionate about it,” said Yonker. “We will have T-shirts — “Bucs Pride –Playing for a Purpose” — for sale at the game.”

The first three T-shirts had been designed by the late Robin Bye, the former Grand Haven High School athletic director who died in April of cancer. Now this year’s shirt has been designed by his daughter, Alisha Bye, who had been “cleaning up” the computer version of the three earlier shirts for her father. 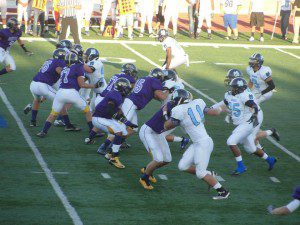 Funds raised are used for one of three programs.

The first is a Community Cares gift basket for a family that has a family member affected by cancer.

The second is to fund cancer retreats for patients at Camp Bluebird. This year Bucs Pride will be sponsoring the October Retreat which is a return of former campers who will be back to be treated like royalty again.

The third program calls for the last Friday of every month to be Purple Day to raise community awareness of the disease.

Purple is used as the color because it covers all of the cancers that could affect people or families, said Yonker.

Grand Haven will keep one of its traditions for the football game, too. There will be a walk at 6:35 p.m. of the Buccaneer football team followed by cancer survivors. Cancer survivors will have free admission to the game, but their family members and guests will have to buy tickets.

Other pre-game activities include a moment of silence for the deaths of three current or former Grand Haven staff members in recent months — Bye, Steve Hewitt and Greg Maynard. The moment of silence will occur after the coin toss for the game.

In addition to the T-shirt sale, Buccaneer players will be presenting their jerseys to community members and organizations that paid for the jersey give-away after the game.

Yonker said in all of the activities and events, Bucs Pride keeps to its mission statement — “Inspiring our community to honor cancer survivors, remember loved ones and passionately give back.”

Bucs Pride is selling its various clothing items in support of the organization at Grand Haven High School this week. T-shirts, hats and the like may be purchased from 1-6:30 p.m. Thursday and most of the day Friday in the community room on the south side of Buccaneer Stadium.

Further information on Bucs Pride can be found at http://www.bucspride.org/ or on its Facebook page at “Bucs Pride.”

Especially important, Yonker said, is for the group to be informed when people have cancer issues. The information has to come from community members to enable Bucs Pride to get a Community Cares basket out to the new patient.

“We can’t help people if we don’t get names,” Yonker said.