The wind on Lake Michigan sure looks like it is going to cooperate this weekend. And that is perfect timing for the 12th annual King Of The Great Lakes kiteboarding festival on Grand Haven beach.

It should be of no surprise that MacKite is the host of the three-day event. The thriving Grand Haven company lives on the wind and has been doing so for nearly two decades. 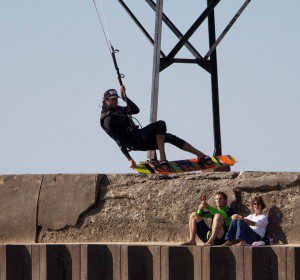 This year KOGL has one if its most impressive lineups with more than 80 registered riders, 9 brands rolling into town, 25 brand reps walking the beach and about a dozen world class riders on the water. And the best part is, brand reps are all in the sand looking for riders to try out the new gear.

“We’ll easily break over 100 riders this weekend,” said MacKite owner and KOGL host Steve Negen. “The forecast is really good right now, knock on wood. Wind will kick in around 2 p.m. on Friday. If it’s windy, no one wants to leave the beach.”

Negen has lined up quite an event with more than $100,000 worth of gear to be tested out for these next three days. He’ll also have two new products on hand.

One new piece of gear is from Woo Sports which is appropriately called “the Woo.” The Woo is an action sports motion sensor designed to track a boarder’s jump height, airtime, and landing G-force. Kiteboarders, snowboarders, skiers and any other riders who get air will now be able to know all those numbers. 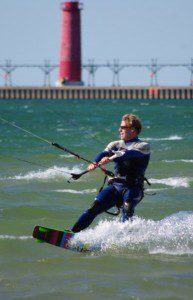 An exciting new foil board also will be in use from Liquid Force. The technology of a foil board basically doubles a rider’s speed and lifts them above the water instead of riding on the water.

“”You’re in heaven. You’re just like YES!” said Negen whose company is one of the top-5 retailers in the country for kiting gear. ” Downtown (Grand Haven) is within a half a minute. People come to kite and be part of the social scene.”

On the scene this weekend will be pro rider Chris Bobryk. KOGL could be considered Bobryk’s home log cabin as he a native of Whitehall and a former employee of Negen’s. Bobryk comes home after a year of what is considered a world tour of riding. Since KOGL 2013, he’s done events in Spain, France, Grand Cayman, Turks and Caicos, Canada, and the U.S.

“It’s good to be home with the homies,” joked Bobryk who is a freestyle rider sponsored by Best Kiteboarding and just coming off a top-5 freestyle finish at the Triple S event in Hatteras, N.C. “Good to see my mom after not seeing her for the year. It’s a good time of year to kite up here. Lots of wind and waves.” 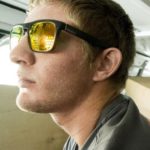 Other pros riding the wind this weekend are Brandon Schied and Sam Meydsky. Schied is actually a West Michigan native from Wyoming and Meydsky is from Ontario. Both were up for kiteboarder of the year.

“It’s funny, people say you have to be on the ocean and two of the guys that were up for kiteboarder of the year are from the Midwest,” said Negen.

Becoming the scene is what MacKite has embarked upon in kiting’s evolution over the last 15 years.

“In 97 and 98 was when the very first kites were available. I was in the scene really, really early, and now an overnight sensation in the industry 15 years later,” said Negen laughing about the timing of the sport’s slow rise to fame. “I got my first kite in 1999. If you would have told me 5 years ago that we’d be talking to people all over the world on a regular basis, I would have chuckled at you.”

MacKite, in fact, does business with kite boarders all around the world. In the U.S., there are only 50 kiteboarding shops and that makes Negen and his crew a very popular bunch.

“We really do a lot of business with new riders,” said Negen. “There are so many people who want to get into the sport mainly because it is a great recreational sport.”

Here in West Michigan, kite boarding enthusiasts can be thankful to live in what is considered world class kiting.

“Michigan is an incredibly great place to kite board,” said Negen. “If you live in Michigan and snow board, it’s fun, but not world class. But with kiting, Michigan is world class.”

KGOL takes place Friday, Saturday and Sunday. Wind conditions look to be consistent in the 20 knots range. Waves should also be pumping Saturday on Lake Michigan as NOAA is forecasting a solid, long northwest wind.

Do not miss out on this unique event. The weather just might hold as temps should be in the high 60s to low 70s.