The Sailors (4-2-2) entered the second half with the game tied 1-1 and with the momentum on their side.  Then Vikings senior goalkeeper Hayden Collins exited the contest after he drilled his head into the near post on a diving save early in the half. 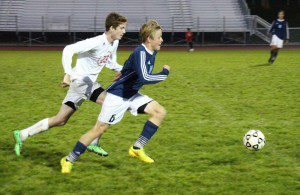 “He passed all the tests but I was not going to put him back in the game,” said Vikings coach Bryan Mahan whose team is ranked No. 6 in Division III.

Devin Buit tied the score for Mona Shores 18 minutes later. Hoover set up the goal on the assist.

The momentum quickly shifted in Mona Shores’ favor after tying the score. The Sailors had multiple chances to take the lead heading into the half, including a solid shot that Hoover rang off the crossbar. 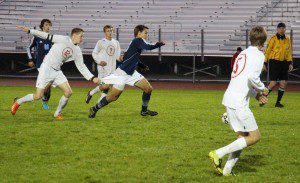 “It was an ugly game in the beginning,” said Sailors JV coach Mike Apostle. Apostle filled in for varsity coach Jeremy Leffring, who was out sick.

“It was a shock for me when I got the call from Jeremy,” Apostle said. “He said it was only his second game missed in 13 years of coaching.”

The Sailors defense was suburb down the stretch, as they held the Vikings to only three good scoring chances in the last 25 minutes of play. 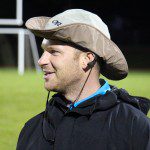 “The defense was in a lot better shape in the second half,” Apostle said.  “Whitehall is a good team and we know they are strong. They came out strong in the first half and we were flat and it showed.”

Neither team will have long to mull Monday’s outcome, as both teams have conference games Tuesday night.

Check out video of Mona Shores’ two second half goals:

And take a look at Whitehall goalie Collins meeting the goal post.

Fruitport, Mona Shores and Whitehall each split its in Volleyball