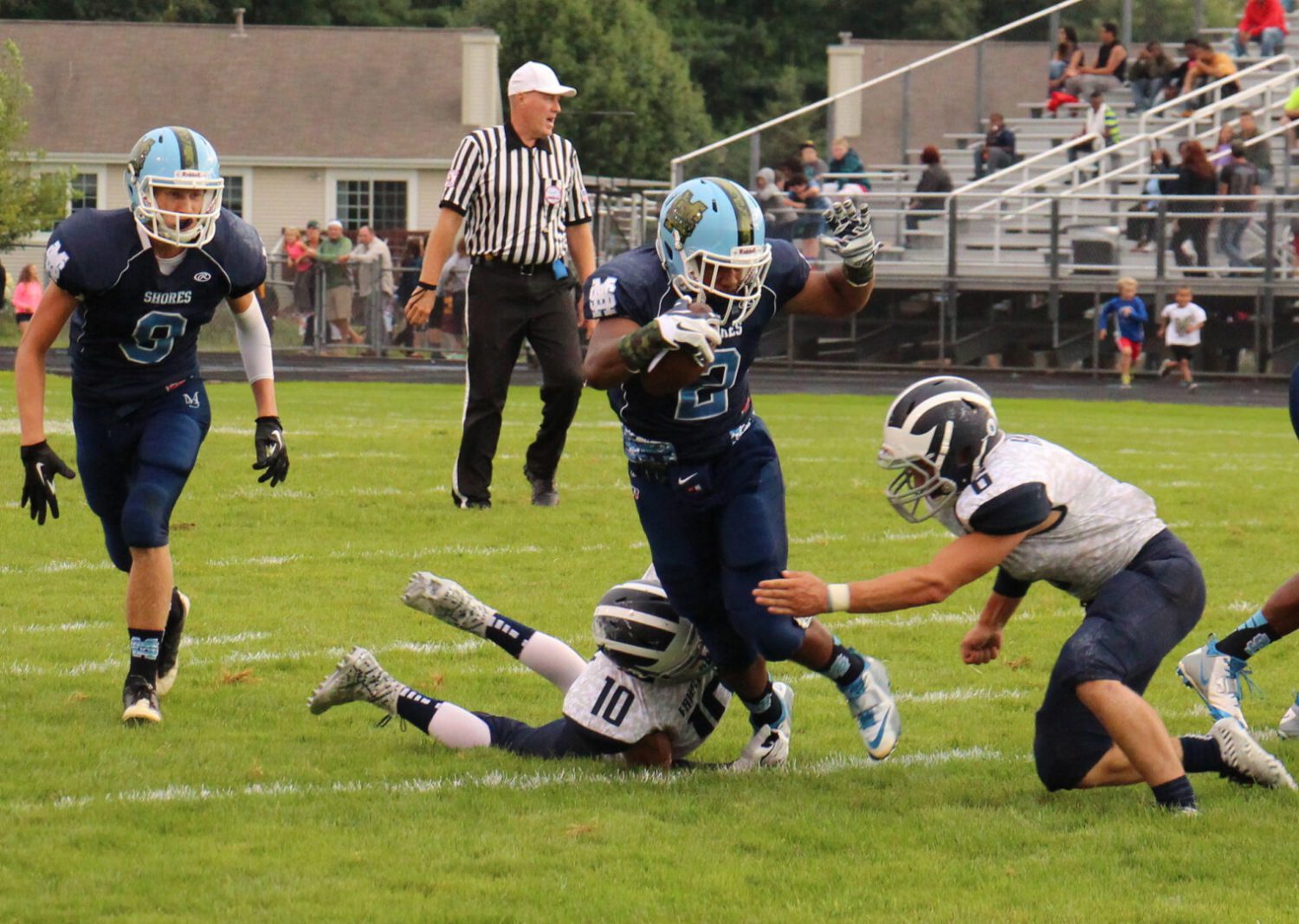 MUSKEGON – Mona Shores and Fruitport met on the football field for the first time since 1983 Friday night.

The latest version of the rivalry turned out to be the most lopsided of all, with Mona Shores walking way with a 48-7 win on its home field to remain unbeaten on the season. 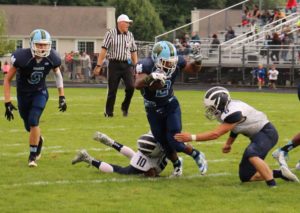 Mona Shores running back DeOntay Moffett gets tripped up by No. 10 Jason Carmean and No. 6 Levi Six. Photo/Jason Goorman

The Sailors used their full arsenal of offensive weapons to gain nearly 500 yards in total offense. They grabbed a 35-7 lead at halftime and never looked back.

“This game helped build our confidence.” said Mona Shores coach Matt Koziak. “We are seeing how dangerous we can be but we still haven’t played perfect football. We need to beat the Rockfords and the Muskegons to really test where we are at as a football team.”

Mona Shores quarterback Tyree Jackson said his team has the weapons to beat anyone it plays, but cautioned that it’s a week-to-week mission, starting next Friday at Rockford.

“We have a lot of weapons on this team,” Jackson said after the game. “We try to get the ball to as many people as possible.”

The Sailors misfired on their first drive, which ended on an interception by Fruitport’s Corey Merkins. But they scored on their first play from scrimmage on their second possession with a 48-yard touchdown run by Hunter Broersma.

They extended their lead to 13-0 in the first quarter on a 70-yard punt return by Darece Roberson.

Fruitport broke the shutout in the final seconds before halftime on a seven-yard scoring pass from quarterback Jarod Wierengo to Andrew Slocum. 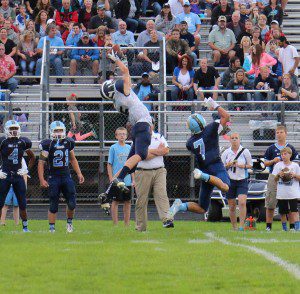 Kobe Burse extended the Mona Shores lead with a 37-yard touchdown reception from Jackson midway through the third quarter. The Sailors wrapped up their scoring late in the game with a five yard touchdown run by backup quarterback Elijah Wilson.

Fruitport was able to slow the Sailor offense in the second half, but couldn’t get their own attack going, gaining only 22 yards in the final two quarters. Trojan running back Nate Kriger, who gained over 100 yards last week, was held to just 46 yards on 14 carries against the Sailors.

“(Kriger) is a tough kid,” Koziak said. “But defensively this is the best team we’ve had since I have been here.”

Moffett led the Sailors statistically with 112 yards on 16 carries. Jackson completed 7 of 10 passes for 166 yards with two touchdowns.

“We need to stick with it and be tough,” said Trojan coach Greg Vargas, whose team fell to 0-2 on the season. “I am proud of my boys win, lose, or draw. Mona Shores is a pretty good football team.”

Despite the one-sided outcome, Koziak said he hopes the renewed rivalry can continue between the two schools.

“I think it is great for high school football and great for our two communities,” Koziak said. “I hope this a game we can continue to play down the road.”