For the first time since 1987, Muskegon Catholic Central and Spring Lake faced off against each in varsity football.

In the visiting Crusaders’ first matchup against the Lakers in the Lakes 8 Conference, MCC unleashed its power and coasted to a 49-0 win.

Spring Lake was handed its first conference loss and slips to 2-2 overall.

“We talked all week and we knew it was going to be a big game,” MCC coach Steve Czerwon said. “Our guys had a great week of preparing and we just executed the game plan tonight.” 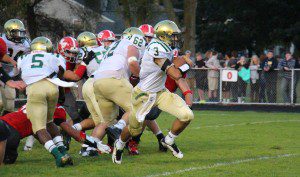 Nick Holt finds a big hole for an 85-yard run which set up a 28-0 MCC lead. Photo/Jason Goorman

It was all Crusaders from the start, as a powerful rushing attack led the defending Division 8 state champs to a 4-0 start to the season.

Running back Tommy Scott and quarterback Nick Holt led the way for MCC, each running the ball for nearly 150 yards. Scott carried 11 times for 149 yards and four touchdowns. Holt gained 195 yards on 10 carries, two rushing touchdowns and another through the air.

“We’ve got so many explosive runners,” Czerwon said. “The ones that Nick (Holt) scored on, those were audibles based on what he sees. (Scott) is as good a running back as there is in the area and I think he proved it tonight. He’s just tough to bring down. I don’t know how you simulate that in practice when you’re going against him.”

MCC forced a Spring Lake three-and-out on the game’s first possession and it didn’t take the Crusaders long to get on the scoreboard. Holt busted off back-to-back 14-yard runs before Scott ran 28 yards for a touchdown. 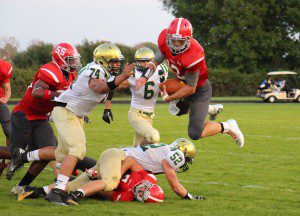 Spring Lake quarterback Mark Williamson flies through the air after getting tripped up by No. 52 Nate Jones. Photo/Jason Goorman

Spring Lake put together one of its best drives of the game starting from its own 20-yard line. The Lakers drove to the MCC 24-yard line. They were forced to attempt a long 43-yard field goal by Kaden Kendall, which would fall just short.

The Crusaders took over and kept it on the ground and scored on a short touchdown run by Scott to go up 14-0 for a first-quarter advantage.

On the Lakers’ ensuing drive, a fumble was recovered by the Crusaders but it was immediately coughed back up on the first play on MCC’s drive.

MCC got the ball with 7:19 left in the second quarter on its own 10-yard line. That didn’t matter much as Holt broke through the line for an 85-yard run, giving the Crusaders first-and-goal. Two plays later Scott scored his third touchdown of the game on a toss to the right, giving them a 21-0 lead.

Following a Lakers punt, Holt tossed up a beautiful arcing pass down the far sideline that Zach Winzer went up and grabbed away from a Spring Lake defender for a 33-yard touchdown strike. That pass would amazingly be the only one attempted by MCC in the contest.

Later in the second, Scott weaved in and out of defenders, breaking tackles and laying stiff arms on his way to a 44-yard touchdown run. MCC led 35-0 at halftime. 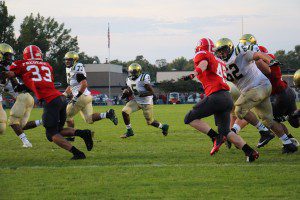 MCC running back Tommy Scott looks for room before he runs in for the score. Photo/Jason Goorman

The Crusaders got the ball to start the second half and started right off where they left in the first on the ground and with running clock. Holt capped off the drive with a 15-yard score to put MCC up 42-0.

MCC kicked off following the touchdown, but the ball bounced over the Lakers’ return man and the Crusaders scooped it up on the 12-yard line. Two plays later, Holt kept in on the option and scored around the left side to round out the scoring for MCC.

Spring Lake had one final shot to score in the fourth quarter when backup quarterback Hunter Moe came on to lead a solid drive. After getting near the goal line, two incomplete passes and a short run forced another field goal attempt, this time a manageable one. However, Kendall’s kick bounced off the right upright despite having plenty of leg behind it.

MCC ran out the remaining time on the clock to seal the 49-0 victory.

“We executed in all phases of the game,” Czerwon said. “I don’t think we punted tonight, so that’s always a good sign. It just goes back to explosive runners and our kids prepared so hard and they just reaped the benefits of it on game day.”

Spring Lake was led offensively by Noah Novakoski, who despite carrying the ball just three times, racked up 49 yards on the ground. Quarterback Mark Williamson gained 38 yards on his 10 touches and backup quarterback Moe ran for 34 yards.

Jakob Frederick rushed 11 times for 30 yards. Chris Boychuk hauled in a 22-yard pass from Moe late in the game for the Lakers biggest play through the air.

“I thought they gave us problems (on defense),” Czerwon said. “They had a nice little package at times, and I don’t know if they had us on our heels, but there were times when they did some nice things sealing inside on our linebackers. They definitely had a nice little game plan, but I think maybe we had better personnel tonight.”

LaTommy Scott chipped in 35 yards on the ground on his three carries for Catholic Central.

The Crusaders will face off against Lakes 8 foe Fruitport next week for its homecoming and Spring Lake will look to rebound against Fremont.

“We’ll try to find a way to get up for next week,” Czerwon said. “We’ve got Fruitport and they’re a heck of a program. They beat us a couple years ago, so they have very capable kids over there.”