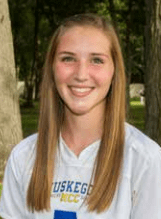 Taylor Walker scored the Jayhawks’ lone goal in the second half on a direct kick from 30 yards out.

“We worked hard but could not find a rhythm and ended up chasing the game,” said MCC coach Josh Watson. “Haley Twigg played well in goal today. She faced a lot of shots but was able to turn away as many as she could.”

MCC heads to Jackson on Saturday, September 20th and have home games the following weekend, September 27 and 28.

Montague gets an easy win over North Muskegon in girls basketball