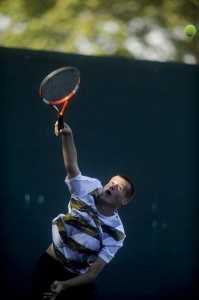 But this year, with a shortage of players on the Norse squad, and Hardman now attending Muskegon Community College, Dobb finds himself playing No. 1 singles and going one-on-one with some of the top players in the area and state.

The competition has been fierce, but Dobb has done extremely well making the transition from doubles to singles.

So far this year Dobb is 13-7 on a team that has only won one match, which was against Fremont.

Dobb and his teammates will test their skills against the best in the area Saturday in the annual Greater Muskegon Athletic Association City Tournament at Fruitport and Spring Lake high schools.

“It’s been a tough transition, and I’m still adjusting to it,” Dobb, 18, told the Local Sports Journal. “The toughest part is just the tough losses.

“I was used to winning all these matches, so it’s difficult.”

North Muskegon, a perennial powerhouse in Division 4 tennis, lost six graduating seniors last season and struggled to put together a team in 2014. Only five boys showed up at the first practice.

Dobb, Coach Joe Gentle and others on the team managed to recruit enough players to compete, and the newcomers are working out better than expected. But the general lack of experience has put additional pressure on Dobbs to perform in the team’s top spot.

A victory from Dobb at No. 1 singles has become virtually a necessity for the Norseman to have any hope of winning a match.

“This year we are struggling a little bit … I don’t actually have a full team,” said Gentle, who is retiring after the 2014 season. “If we don’t win the top three singles spots, we don’t have a chance.”

Dobb, who has played tennis since age four, said he doesn’t dwell on the team’s predicament. Instead he’s focused on improving on his record at the city tournament Saturday, and at regionals next month, he said.

“Regionals are extremely difficult because a lot of local teams are in the top 10” statewide, Dobb said.

The city tournament will be no cakewalk, either.

The Norsemen will face stiff competition from Whitehall as well as traditional tennis powerhouse Mona Shores.

“Mona Shores is the big one for me. I’ve actually never beat any Mona Shores player in my high school career, so even one win against them would be big for me,” he said.

Gentle said he believes Dobb has transitioned well from doubles to singles, and certainly has the skill to compete with the area’s best.

“It’s always a challenge. It’s quite a bit different when you don’t have your partner covering half the court, but he’s been able to make the transition because he has a well-rounded game,” Gentle said. “It’s a different mindset, it’s a faster game in doubles. With singles, you have to be more patient.”

“He has a good all-around game, which especially in singles I think is important,” Gentle said, adding that the ability to adapt to each opponent, and having a mindset to persevere when trailing, is critical.

Dobb said he’s been working on elements of his game rarely used in doubles play. But he says one element of doubles – frequently playing close to the net – has come in handy in singles play.

“There are more ground strokes (in singles) and my ground strokes haven’t been used in quite some time,” he said. “Doubles is quite different from singles, but it really helped me learn to finish off at the net.”

He’s also learned to stay in the game when the going gets tough, he said.

“In doubles you have a partner to pick you up … but in singles, you are out there by yourself,” Dobb said.

“No matter who you play you are facing great competition and it’s hard,” Dobb said. “A lot of these kids were All-State in singles.”

However the season turns out, the 3.1 GPA student said he hopes to enroll in Ferris State University’s pharmacy program after graduation, and will look to earn a spot on the tennis team as a walk on.

He said he owes much of his success – in doubles and in transitioning to singles – to Coach Gentle, whom he credits for helping North Muskegon create a legacy of excellent tennis teams.

“It’s his last year and he has been a big inspiration for my tennis career,” Dobb said. “He’s been the foundation of everything I know about tennis and I just really respect him as a person.”