In a high-scoring affair, the Fruitport boys soccer team edged Fremont 5-4 on Bryan Rebone’s game-winning goal on Thursday. Fruitport improves to 3-2 on the season and Fremont falls to 1-1-1.

Fremont earned a 4-1 lead at halftime, thanks to goals by Nathan Hoffman, Trevor Rosenberg and a pair of goals by John Rozanski. Fruitport’s lone first-half goal was scored by Noah Hendricks and assisted by Kyle Winger.

The game stopped for an hour before the half because of a lightning delay. Fruitport came back to score four unanswered goals in the second half. Hendricks added his second goal of the contest on a crossing pass from Winger. Zack Shane scored unassisted and Rebone scored the tying goal and was asssisted by Cameron Brandow.

With just six minutes left, Rebone scored the go-ahead and eventual game-winning goal and Hendricks picked up an assist.

Western Michigan Christian 3, Grand Rapids Preparatory 1: WMC improves to 5-2 on the season after winning its River Valley Conference opener. Dylan Mines scored just a few minutes into the game when he received a perfect pass from Ben Mast and shot it into side of the net. Mines added another goal moments later, giving WMC a 2-0 lead early. After an opposing goal by Josue Daza, Mast cashed in on a rebound to round out the scoring.

Reeths-Puffer 8, Sparta 0: The game was called at halftime after seven different Rockets scored. Logan Skinner led the way with two goals, while Noah Sorn and Noah Cramer both added a goal and an assist. Other goal scorers were Chase Sitkavitsas, Evan Hall, Trevor Fowler and Brendan Sherwood. Goalkeepers Jake Lofgren and Brody Yarian kept Sparta off the scoreboard with a save apiece. The Rockets improve to 1-3-1 on the season and will host North Muskegon on Saturday. 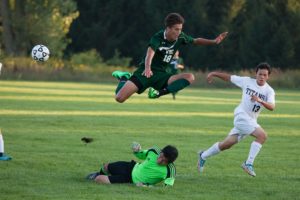