Alone at the top of the league. 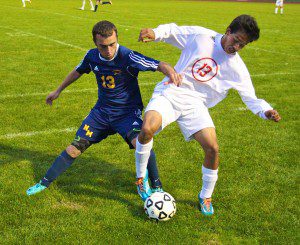 The Vikings, who have won the WMC title for seven straight years, came in the game tied with the Norse atop the WMC with a 6-0 league record. But Whitehall used a pair of goals from newly-converted forward Jon Gonzalez to secure a 3-1 victory on its own field.

The victory also secured Whitehall the top seed in the upcoming conference tournament.

The Vikings were powered by a breakout game by Gonzalez, who usually plays midfield but was moved to forward for Monday’s contest by Whitehall Coach Bryan Mahan.

He quickly demonstrated a nose for the net.

“He’s one of my offensive mids,” said Mahan. “But we have some pretty big injuries right now so I put him up at forward. He sees the ball well, but holy smokes. did I have him in the wrong position. He got up there and took complete advantage and showed the skills he has up top.”

The first Viking goal came off a Windsor Marecek pass that bent its way around the defense. Gonzalez took possession, left the defense behind and pushed a shot into the corner past a charging Norse goalie, Zach Massey.

Gonzalez struck again five minutes into the second half, on a goal that looked like a pass at first, then managed to skirt past Massey.

“His second goal is a subject of much debate,” Mahan said. “He turned the corner, wasn’t sure if he was shooting or slotting the ball because it caught the goalie completely off guard and went in.”

The Norse (11-7-1, 6-1) never gave up. After several near misses at the end of the first half, and the start of rain, North Muskegon finally got on the board with four minutes left with a goal by Marco Visconti. 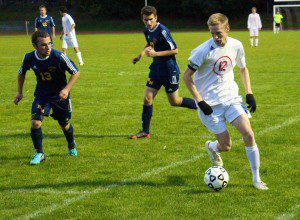 “We were pushing up as a group and they cleared the ball and we were caught,” said Mahan. “We weren’t shifting well.”

Whitehall finished the scoring, and secured the victory, with a similar goal by Daniel Dubois two minutes later. After a Norse free kick, Whitehall cleared the ball to set up a foot race between Dubois and Norse goalie Massey. Dubois took control just as Massey was set to clear, and he chipped in a shot from 35 yards out.

The win sets up the 13-4, 7-0 Vikings as the No. 1 seed in the conference tournament, which starts Wednesday, and guarantees the team home field advantage because top seeds play at home.

“Any advantage you can get is a good advantage,” said Mahan about the tournament. “But with teams like Hart, Shelby and North Muskegon vying for that tournament championship, you just have to play consistent.

“My focus for them is how do we play each and every game. You set the goal (a state championship), but once the goal is set you have to focus on what you have to do today to get there.”