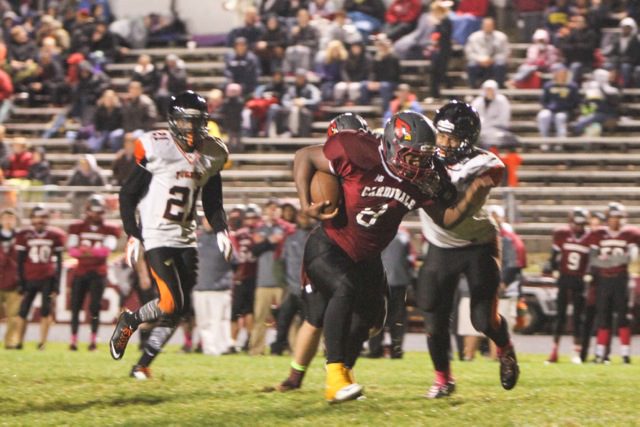 Orchard View is now 5-3 on the season, and it takes six wins to guarantee a playoff spot. The Cardinals will face unbeaten Oakridge next week in the season finale.

For Clanton, the victory was extra sweet. He not only led his team to a big win, but eclipsed the 1,000-yard rushing mark for the season.

“It feels real good,” Clanton said, “We worked really hard for it and it paid off.”

“(Clanton’s) a great kid and he’s put in a lot of work,” said Orchard View Coach Joe Tanis, whose team clinched its first winning season in five years. “He and the other three seniors have made a difference in our program.”

Orchard View led off the scoring with a 61-yard scoring drive in the first quarter. Robert Clanton (not Bobby) capped the drive with a four-yard burst with 6:22 left in the quarter. 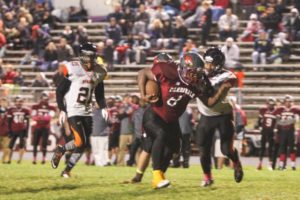 A missed two point conversion left the Cardinals with a 6-0 lead.

OV’s Mike Parker busted up the middle for a 45-yard touchdown early in the second quarter, putting the Cardinals up 12-0.

The Cardinals controlled the Tigers’ potent passing attack with five quaterback sacks in the first half. Three of those came from Orchard View junior Ryan Casler.

“We just did not want to get beat deep,” Tanis said. “If we could eliminate the big plays, things would work out in our favor.”

After a big sack which produced great field position, Bobby Clanton scored his first touchdown on a 13-yard dash with 5:51 left in the first half. Another failed two-point conversion left O-V up 18-0.

Bobby Clanton scored from three yards out on the first drive of the second half to extend the Cardinals’ lead to 24-0. 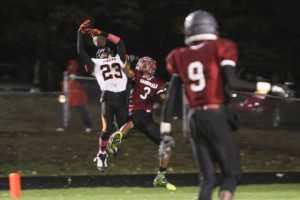 Tydrekus Purnell goes up for the pass as OV’s Kris Wells tries to break up the play. Photo/Joe Lane

The Tigers responded with a 17-yard touchdown pass from quarterback Ontario Porchia to Demontae Jones with 2:11 left in the third quarter.

But Bobby Clanton answered with a 10-yard touchdown run with early in the fourth quarter. Mike Parker capped off the scoring with a two-point conversion.

Parker had nine carries for 87 yards for Orchard View. Robert Clanton added 69 yards rushing. The defense produced seven sacks, including Casler’s three, Jalen Hatcher with two, and Grant Beach and Izzy Corona each with one.

Porchia passed for 154 yards, including a touchdown, for Muskegon Heights. Pherrius Flowers hauled in three catches for 51 yards.

Muskegon Heights fell to 3-5 on the season.