Brendan Hamilton is a contender for regional honors, despite being a part-time, first-time cross country runner

FRUITPORT – Just imagine what Brendan Hamilton might have accomplished if he could have focused exclusively on running this fall.

But Hamilton is a senior at Fruitport Calvary Christian, a small, close-knit school where most of the athletes play multiple sports, often in the same season. 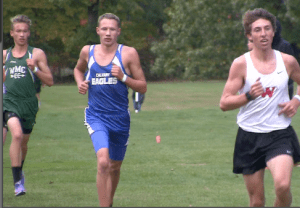 Hamilton has been splitting duties this fall between cross country and soccer, which has limited his cross country experience. He has only competed in four meets this season, compared to 10 or 15 for other top runners.

Despite that handicap, Hamilton is doing just fine in cross country.

He had his best time of the season in the recent Greater Muskegon Athletic Association City Meet, where he finished second overall to Whitehall’s Keaton Smith with a time of 16:14. Both Smith and Hamilton shattered the course record that day at University Golf Course at Muskegon Community College.

Now Hamilton is preparing for Saturday’s Division 4 regional meet in Allendale, where the top 15 boys and girls runners, and top three teams, will qualify for the state finals.

Hamilton seems like a strong bet to take that next step, despite the fact that he spent much of the season playing soccer. He’s currently ranked fourth in the state among Division 4 runners and second in his region.

His soccer season ended more than a week ago, and he’s been focused on preparing for regionals since then.

“I definitely think I could be further ahead (without playing soccer), but all the conditioning in soccer also helped me get in shape for running,” said Hamilton, who was the captain and starting sweeper on the soccer team.

“I have a long distance running coach I’ve been working with. The last week and a half he’s been giving me advice and a calendar for workouts.”

Hamilton is both a part-time and first-time cross country runner.

He’s been a standout in track for three years at Calvary Christian – he was all-state last year in the 1,600 meter run –  but he couldn’t run cross country in the past because the school didn’t have a team.

Calvary Christian finally fielded a squad this fall with Hamilton, two other boys and three girls on the roster.

One might assume track taught Hamilton everything he needed to know for cross country, particularly since he runs long distance events in the spring.

But those events take place on flat, paved oval tracks, while cross country is run in more primitive conditions, which makes it a different type of challenge.

“I’ve been wanting a cross country team for a few years,” Hamilton said. “I got really into long distance running in track, and I thought it would be a good opportunity.

“There is a bit of a difference (between cross country and track). It’s the same mindset, but instead of running in circles on a track you run in the woods, and every race is different. Some courses are really hilly and the ground is uneven, while others are really flat.”

Most athletes playing a new sport would have the challenge of adjusting to an unfamiliar coach. But Hamilton doesn’t have that problem, since the Calvary Christian coach is also his mother, Carrie Hamilton.

She ran sprint events in high school track, and in recent years has taken an interest in recreational distance running.

“When they started a team here they asked me if I would be able to coach, and I said sure,” Carrie Hamilton said.

Carrie is also Brendan’s biggest fan. She thinks he’s peaking at the perfect time for regionals, and likes his chances of qualifying for state.

“Brendan is pretty self-motivated and he has a passion for running,” Carrie Hamilton said. “We think it’s one of the things God gifted him with. He’s always been like the Energizer Bunny – he never really sat still for very long, and he still doesn’t.

Hamilton said having his mom as a coach has its advantages. For instance, he never has to memorize the practice schedule, because she’s always around to remind him.

“It’s worked out well,” Hamilton said. “We have a strong relationship. She has taught me a strong work ethic, and to do everything in God.”