DeRemer, the big scorer, and Hoover, the assist king, are a perfect combo for Mona Shores soccer

NORTON SHORES – Mona Shores’ Jake DeRemer and Nate Hoover have evolved into a dynamic duo that’s been virtually unstoppable on the soccer field this season.

DeRemer’s lightning speed and striking ability, combined with Hoover’s precision passing and strong field vision, have propelled the Sailor squad to a 10-4-2 overall record and a shot at the O-K Black Conference title. 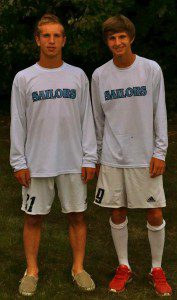 Their deadly combination has also resulted in some jaw-dropping stats – DeRemer’s 17 goals and Hoover’s 17 assists.

DeRemer was recently tied for the most goals scored this season in Michigan’s Division 1 high school soccer, and Hoover has broken the Mona Shores career record for assists, which was 48.

“They are polar opposites in skill sets and that’s a perfect complement to one another,” Sailor Coach Jeremy Leffring told the Local Sports Journal. “We play pretty tough teams … and they are creating opportunities against even our best competition.”

Leffring said both players are among the best in the area, but it was DeRemer’s adjustment in his scoring style that has made the biggest difference this season.

“A lot of his game was above average, but this year, when he got his senior poise, he’s been finishing much better,” Leffring said of DeRemer. “He’s always been fast, but instead of trying to kill it he puts it in the place it needs to be.”

“He’s the point guard (who distributes the ball), and if you’ve got a guy who can score as well, you have a great dynamic,” Leffring said.

Hoover agreed that DeRemer has “definitely improved on shooting a lot” since last year, but said his partner has also gotten better at exploiting defensive weaknesses.

“The runs he’s making, he seems to learn what runs will be best in each game,” Hoover said, adding that other strong passers in the Sailor midfield corps are making great plays, as well.

DeRemer said “This year I’ve really focused on just putting the ball in the net … instead of making amazing goals.

“I’m trying to finesse it, rather than power it,” he said.

But the 5-7, 157 pound scorer also says Hoover’s passing ability creates a lot of his scoring opportunities. DeRemer says several years of playing together has helped the teammates learn each other’s tendencies and develop a rhythm on the field.

“We hadn’t really played on a team together until high school, and now that we have a few seasons behind our backs … we’ve started to gel more,” DeRemer said.

“Nate is very good at finding passes not everyone can see and he finds the small lanes to go through and I just run up on it,” he said.

The Sailors lost eight graduating seniors from last year’s team, but it’s not obvious from their record. The team has only lost four games, and remain in the race for a third consecutive O-K Black Conference  championship.

DeRemer and Hoover say they want their team to do a lot better than last year, when they lost to Grand Haven in postseason districts for the second straight season.

“The last few years we’ve been knocked out by Grand Haven in either the finals or semifinals of our district,” DeRemer said. “Our main goal right now is to win our district championship and move on to regionals.”

Grand Haven’s 3-1 win over Mona Shores this season was a learning experience, and Hoover said the Sailors intend to do a little schooling of their own when they meet the Buccaneers again.

“We definitely dominated the whole second half so I think if we come out stronger in the first half we should be able to beat them,” Hoover said.

DeRemer also serves as the Sailor’s placekicker in football, said his experience on the gridiron could help him make crucial plays on the soccer field in the postseason.

Two of his field goals came against state power Saline in the season opener – including a game winner from 29 yards.

“I think it helps me play under pressure because when I’m out there on the football field I have thousands of people … looking at me,” he said. “It really does help for clutch play.”