MUSKEGON – The Muskegon Lumberjacks’ Matheson (formerly known as Matt) Iacopelli says he gets a particular kick out of scoring goals during road games, “to shush the crowd – that’s what I like.”

He did plenty of that last weekend, notching a single goal in Muskegon’s 3-2 victory in Lincoln last Friday, then adding two more in Saturday’s 4-3 loss to the Stars in a rematch. 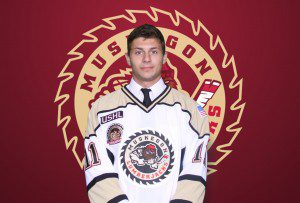 Iacopelli, the reigning United States Hockey League goal scoring champion, currently has a total of six goals, which is tops on the Lumberjacks and puts him in a tie for the league lead with Brock Boeger of Waterloo.

He’s currently on a pace to score 51 this season, which would easily surpass the remarkable 41 he posted last season.

The best part is that Iacopelli and the Lumberjacks are returning home this weekend for the first time in three weeks (five games). They will host the Chicago Steel Saturday at 7:15 p.m. at the L.C. Walker Arena.

That will be the first of five straight home games for the Jacks. They will host Green Bay for a pair of games Oct. 24 and 25, then will play Team USA in a midweek game Oct. 29.

The way Iacopelli has been trending, Jacks fans can be excited about the prospect of watching him light up the scoreboard at home, for a change.

“I’ve just been shooting the puck a lot, and the shots have been going in,” said Iacopelli, who also has one assist this season. “I’m not too sure why. But I’m pretty happy with the way the season has started.”

Iacopelli could easily have completed a three-goal hat trick last Saturday in Lincoln and tied the game in the process. He had a breakaway that looked like a sure goal in the final minutes, but the puck got away from him and the Stars escaped with the victory.

“We were down by one, the puck was chipped in (to the Lincoln zone), and I beat a guy to it and had an open net, but the puck was wobbly and it flipped over my stick,” Iacopelli said.

Despite the pleasure he gets from scoring goals and quieting arenas in distant cities, Iacopelli said he and his teammates will be excited to finally play a home game Saturday.

“It’s going to be our first home game in three weeks, so it’s going to be fun,” he said. “We play Chicago, which is a pretty good team, so we’re going to have to bring our best.”

Where did ‘Matheson’ come from?

Pretty much everyone in Muskegon became accustomed to referring to Iacopelli as “Matt” last season.

But that’s not the name on his birth certificate. He was born Matheson Iacopelli on May 15, 1994, and his grandmother made it known that he should use the name he was given.

So Iacopelli is respecting her wishes, asking arena announcers and reporters to refer to him as “Matheson Iacopelli.”

He said he will make an exception for Lumberjacks radio play-by-play announcer Bryan Fongers, because he has to talk fast describing the action, and “Matt” is quicker and easier to say.

“My grandma was not happy,” he said. “She told me I was a Matheson, not a Matt, so that’s what I’m going to go by. She said that around the beginning of last season, and I told her I would change it this season.”

Iacopelli said he doesn’t mind being called by his proper name, particularly since he almost ended up with a far more unusual name at birth.

He said his mother thought about naming him “Giavano,” or something like that,’ in honor of his Italian heritage.

Muskegon is 4-3-0, good for first place in the USHL’s Eastern Conference. The Lumberjacks are one point ahead of Bloomington in the standings.

To score in hockey, you have to shoot the puck. And to win a lot of games, it helps to outshoot opponents. Of course having more shots is no guarantee of victory. The Lumberjacks proved that Saturday when they outshot Lincoln by a whopping 43-19 (including 20-4 in the third period) and still lost.

But the law of averages says the more shots you take, the better chance of scoring.

That was a problem for the Lumberjacks last season. They were collectively outshot by opponents 2,034-1,876.

Things are off to a far better start this season. Muskegon has outshot opponents 240-179. That makes sense, since the Jacks have 11 forwards with vital USHL experience.

But, again, shots on goal have not always been an indicator of who would win the game. The Lumberjacks were outshot 28-20 by the Team USA Under-18 squad and captured the victory. They outshot Cedar Rapids 35-27 and they lost.

Last season they won 15 games in which they were outshot, and lost 11 when they had more shots.

Ward, the Galesburg, Michigan native, is in his second USHL season. He had one goal and two assists in 25 games for Lincoln last season. He is committed to play college hockey at Northern Michigan University.

Dodero had had seven goals and 10 assists for the Lumberjacks last season.

The Jacks also sent forward Nicolas Carbone to the Odessa Jackalopes out of the North American Hockey League.  He had one goal in five games for Muskegon this season.

Lumberjacks defenseman Christian Wolanin has committed to play college hockey at the University of North Dakota.