Jack Rowe, a late-season acquisition, has turned out to be a valuable addition for the Lumberjacks

MUSKEGON – Why would any team want to trade a player like Jack Rowe?

Rowe, 20, spent his first 2 ½ seasons in the United States Hockey League with Cedar Rapids. He was a productive scorer, particularly in the 2012-13 season, when he totaled 16 goals and 13 assists for the Roughriders. 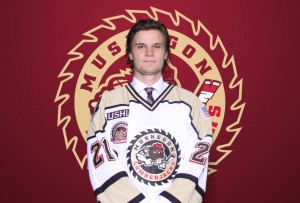 But last season, around Christmas, he was suddenly traded to the Fargo Force. Then he barely had a chance to break in his new locker before being dealt to the Muskegon Lumberjacks after only 12 games.

He turned out to be quite a find for the Lumberjacks.

Rowe immediately got hot when he came to Muskegon, scoring 10 goals with three assists in the last 19 games of the season. His performance helped the Lumberjacks go 11-4 in their last 15 games and come very close to securing a playoff spot.

This season Rowe is at it again, notching four goals and four assists in Muskegon’s first eight games. He also became an official team leader when the other Jacks elected him an alternate captain before the season started.

Lumberjack Coach Todd Krygier said Rowe was a great late-season pickup and a smart investment for the 2014-15 campaign. Rowe won’t be starting his college hockey career at the University of North Dakota until the fall of 2015.

“He wasn’t just scoring goals for us (last season), he was scoring game-tying and game-winning goals,” Krygier said. “He scored a lot of very big goals to put us in a position for a playoff spot.

“We knew what we were getting experience-wise, and we talked to North Dakota and they said we could keep him another year. We also knew what a quality person he is. He’s a good leader and a great teammate.”

Rowe said he was ready for a fresh start with another team when he was dealt from Cedar Rapids last season. He said the hardest part was leaving the billet family he had lived with for several years.

He said he enjoyed his short stay in Fargo, but wanted a chance to be in the playoffs, and the Force was not going to make it last season.

“Toward the end they knew they weren’t going to make the playoffs, and they had to look to their future,” said Rowe, who came to Muskegon for a future draft pick. “It was nice to get to a team that had a chance to win every night.

As it turned out, the Lumberjacks didn’t make the playoffs, either, but they came very close, thanks in good part to Rowe.

“We all really came together and decided we wanted that spot in the playoffs,” Rowe said. “That was my goal, to do everything I could to get us in the playoffs. It just so happened I had the chance to put a few pucks in.”

Rowe said the players were devastated when they missed the playoffs.

“It was definitely disappointing,” he said. “We took that into the summer. It left that bad taste in our mouths.”

Just by coincidence, Green Bay is coming to Muskegon this weekend for Friday and Saturday night games at L.C. Walker Arena. It will be the first time the teams have met in the regular season since their fateful showdown last spring.

“Everyone remembers what happened last year,” Rowe said. “They know we’ll be gunning for them.”

The Lumberjacks are 5-3-0 following Saturday’s 4-3 comeback win over Chicago.

They have 10 points in the standings, and are tied for first place in the Eastern Conference with Cedar Rapids. Bloomington and Youngstown are tied for second with nine points apiece.

A lot of fans probably noticed that the Lumberjacks looked sluggish Saturday in their victory over Chicago, particularly in the first period.

There was a reason for that.

Hockey teams have to do periodic conditioning, which involves a lot of hard skating and other types of strenuous workouts for several days in a row.

Krygier looked at the schedule, noticed it was a rare one-game week, and put the players through the paces last Monday through Wednesday.

“Those were real difficult workouts,” Krygier said. “They came into Saturday and they had no legs.

“We knew the guys weren’t going to be comfortable, but we felt as though that wouldn’t affect our performance. Our first period wasn’t that bad, but we didn’t have legs and we weren’t sharp.

“The second period we started feeling a little better, and in the third period we got the lead and the guys locked it down defensively.”

Muskegon trailed 1-0 after one period, and the game was tied 3-3 after two. David Keefer scored the game winner in the third period for the Lumberjacks.

The Lumberjacks dealt defensemen Daniel Willett to the Madison Capitols in exchange for a seventh round 2015 USHL Phase 2 draft pick.

Willett scored one goal and tallied nine assists in 34 games as a member of the Lumberjacks.

The “Wright” guy for Shelby coaches his 1,000th varsity baseball game – and wins!

No rest for the Big Reds: After getting past Mona Shores, Muskegon will face a loaded Lowell squad in regionals