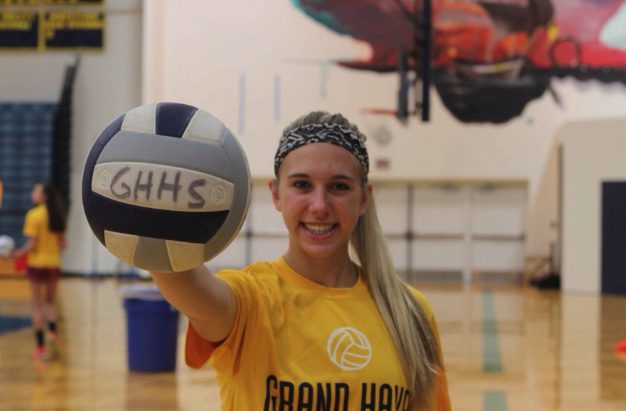 But last season, as a junior, she knew she wasn’t on track, physically or mentally, to make that jump. She was a part-time starter for the Grand Haven volleyball team, and her future in the sport seemed questionable. 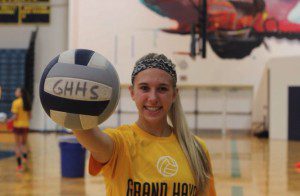 So Monsma went to work, hitting the gym, adjusting her diet, and changing her mental approach to the game.

Her transformation has been remarkable. This season she’s a starter, team captain and key player for Grand Haven, which is ranked fourth in the state heading into postseason play.

“What really got me is I took a good look at myself and I wasn’t comfortable with who I was,” said Monsma, a talented 5-10 outside hitter. “I knew I wanted to play college volleyball.

“In order to get what I wanted, I needed to make a very big change. That just happened to be getting in the weight room, being more involved, cutting off the food, and this is what it has gotten me. It really helped me overall in my game, stepping up and being a better person mentally.”

Monsma’s personal sacrifice has paid off for the Buccaneers (47-8), who will start their quest for a Class A state title at next week’s district tournament at Kenowa Hills.

Grand Haven received a first-round bye and will face the Fruitport-Muskegon winner on Wednesday.

Nobody is happier about Monsma’s transformation than Coach Aaron Smaka. He knows the price she’s paid in her quest to reach her dreams.

“I’m so proud of this kid from where she’s come,” Smaka said. “She’s just worked extremely hard in the off season over the last two years to get where she’s at. She’s done it in all aspects of her game, from the physical side, mental side and leadership side to just really being a dominant player now.

“She plays every game just as hard as she absolutely can.”

Smaka says Monsma’s strength on the court is attacking, but notes she’s also one of the best serve receivers on the team.

Monsma is expected to continue as an outside hitter at NMU, where she plans to study hospitality management with a future goal of owning her own restaurant.

Smaka thinks NMU is a great fit for Monsma, who was a late bloomer in the recruiting process.

“Last summer at some of the camps she literally caught the eye of the Northern coaches and within two weeks was offered a full ride,” Smaka said.

“She’s in the best shape of her life. Physically, she’s worked really hard to become stronger and to become more fit. And that has been a huge focus. She’s also become a real true student of the game. She watches film non-stop. She’s always looking for ways to get better.”

Monsma definitely enjoys her role as an outside hitter for the Bucs.

“I think outside hitter is someone who is very explosive and kind of the go-to person,” Monsma said. “I like being that explosive powerful hitter people don’t like to go up against.”

Smaka said Monsma has improved her approach and skillset as an outside hitter. And the results have been impressive.

“She’s always hit hard, but she didn’t hit very high,” Smaka said. “But this past year, she’s learned to hit high. She’s learned to hit different angles and has done a real good job seeing the block in front of her. She’s able to move the ball anywhere as an outside hitter. She kind of takes what the defense gives her and that makes her real dangerous.”

Monsma is one of three key seniors for the Bucs. The others are middle hitter Mackenzie Ritzema and right-side hitter Amy Kober.

Senior leadership has paved the way for the Bucs with Monsma leading by example.

“She will push through and do anything and now she takes others with her,” Smaka said. “She makes her teammates around her better. She’s worked really hard on her communication.”

Monsma hopes to lead the Bucs to another district title and more trophies down the tournament trail.

“So far this season I think everyone has stepped out of their comfort zone and really stepped up and made it clear we want this,” Monsma said. “We are all very driven to a common goal and that is to win our final game (which would be a state title). It’s a lot greater than a district championship.”