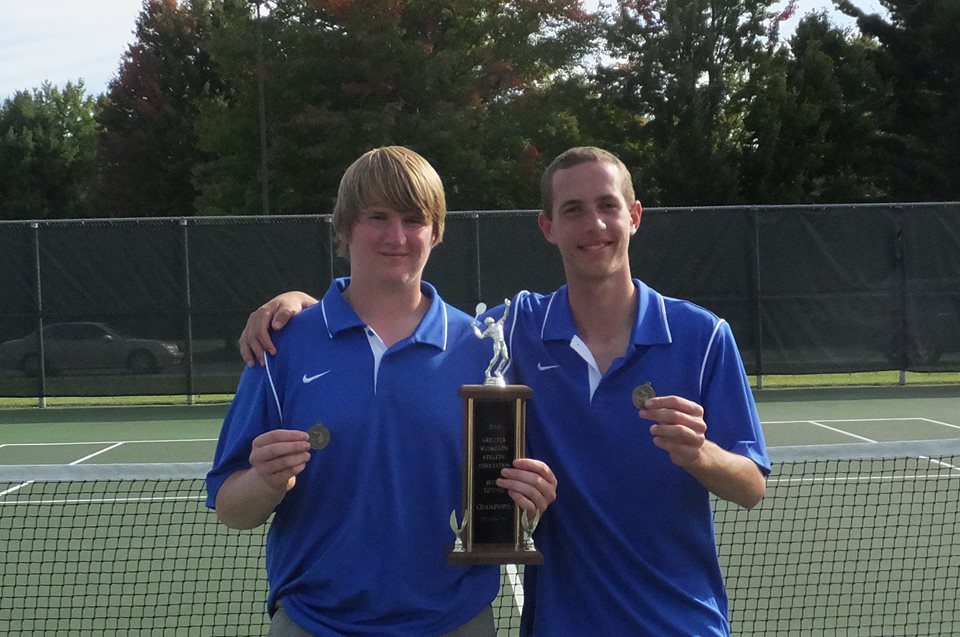 NORTON SHORES – Ben Romaniello and Dan Ribbink have demonstrated their impressive skills on the local level.

Now the two Mona Shores tennis partners, who form the Sailors’ No. 1 doubles team, are ready to challenge the best in the region and state. 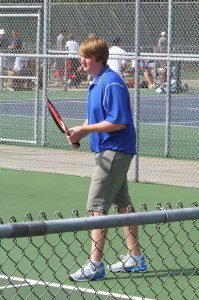 Romaniello and Ribbink have racked up a sterling 27-3 record this season, with championships at the Greater Muskegon City Meet and the O-K Black Conference Tournament along the way.

Their dominant play helped the relatively inexperienced Mona Shores tennis team fight for a conference team title this fall. The Sailors ended up a very close second to Zeeland East in the league standings.

Now Romaniello and Ribbink are ready for the postseason, starting with Thursday’s Division 1 regional tournament at Holland High School.

The catch is that Romaniello and Ribbink could win the regional title in No. 1 doubles (a definite possibility) but fail to qualify for the state finals.

Only No. 1 singles players can qualify for state as individuals, without their teams. Romaniello and Ribbink are depending on their teammates to have a good day at regionals, so the team can finish in the top two, or collect at least the minimal number of points, to qualify for state.

Mona Shores has missed the cut for the state finals by one point each of the last two seasons.

“Our team has struggled in spots, but has come a really long way from the beginning of the season,” Romaniello said. “Our team this year has a great chance of going to state, and I just hope everyone plays up to their standards so we can.

“I think every team we’re going to play this year at regionals is beatable.” 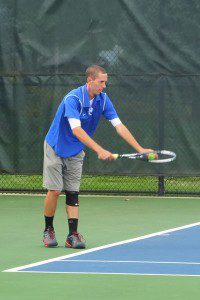 Making it through regionals could be a bit easier this year for Mona Shores. In the past the Sailors competed in a Division 2 regional, which was annually dominated by tennis powers Forest Hills Central and Forest Hills Northern.

This year’s Division 1 regional has a more balanced field of teams, with no completely dominant schools. But that also means “there are more teams that have a chance to make it to state,” first-year Mona Shores coach Craig Kelley said. “We are probably going to need everyone to win their first round. It’s going to be highly, highly, highly competitive Thursday.”

The Sailors lost six seniors to graduation in the spring, but the newcomers have developed well over the season, according to Kelley.

“For having to replace half the team, I’m very happy,” he said.

Romaniello and Ribbink are expected to fare well at regionals, having already beaten nearly all the competitors they’ll face in Holland. The notable exception is Grandville’s No. 1 doubles team, which handed them two of their three losses.

“That’s going to be the match we’re looking at. They have definitely become a rival this season,” said Ribbink. “I definitely think it’s time for me and Ben to step it up against them.”

“They are really good at getting into your head and they totally destroyed us mentally,” Romeniello said. “The way they get in your head is the way they win most of their matches.”

Based on their success, some people may assume that Romaniello and Ribbink have been playing together for years, but that’s not the case.

Adjusting to each other was a process they had to work through, but the partners are close friends and bowling teammates, and they’ve blended very well.

“He’s a solid player all around,” said Romanielli, when asked about his partner. “Dan is a phenomenal ground stroke hitter and baseline hitter, so that really helps a lot to improve us as a team.

“It took some time for us to get our chemistry together and how we play together, but once we got that down we were just unstoppable.”

“For not having played much doubles, Dan is doing extremely well,” Kelley said. “It takes time to develop doubles skills and these guys are a very good doubles team.

“I would probably put them in the top five of any doubles team I’ve seen in high school.”