MUSKEGON – For two quarters Friday, the showdown between Mona Shores and Muskegon looked like it would be the nail-biter that everyone expected.

The teams traded blows in the first two quarters and went to the locker rooms tied 20-20.

But the Sailors emerged from halftime ready to pounce on the Big Reds.

It started when Mona Shores’ Hunter Broersma snagged an interception on the Big Reds’ opening possession, then raced, angled and stiff-armed his way to a 55-yard pick six.

Minutes later Sailor quarterback Tyree Jackson hit Matt Schuiteman with an electrifying 60-yard touchdown pass, giving Mona Shores the cushion it needed for a surprisingly easy 48-27 victory over the Big Reds in front of a huge crowd at Hackley Stadium. 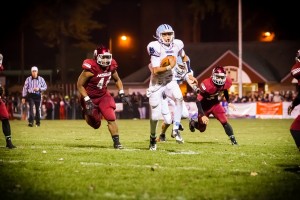 The victory gave the Sailors their first O-K Black Conference football championship. It was the first conference title of any sort for the Mona Shores football program since 1968.

Both teams have qualified for the state playoffs, which will begin next week. First round pairings will be announced Sunday night.

“That is a well-coached, hard-nosed football team and our coaching staff put together a great package offensively and defensively,” said Mona Shores Coach Matt Koziak. “To be able to get a win like this and do it in Hackley Stadium against a great football team … It’s a huge accomplishment for our kids and coaches.”

“It was crazy,” Broersma said. “I can’t really explain it because my head is going crazy right now because we just won conference champs for the first time in forever.”

Sailor quarterback Tyree Jackson came up huge in his final regular season game, throwing for 197 yards and three touchdowns on 13-for-21 passing. He also rushed for 134 yards and two touchdowns. 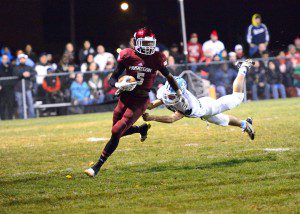 Muskegon senior Joeviair Kennedy (5) escapes a Shores tackler to the outside. Photo/Tim Reilly

“Everyone on this team believed we could do it from when we were freshmen,” Jackson said. “I really expected this to be done. I couldn’t be more pleased with my team and everyone in the community for coming.”

Mona Shores struck first, as senior DeOntay Moffett ripped off a 38-yard touchdown run to put the Sailors up 7-0 in the first quarter. A 30-yard field goal from Muskegon’s Miguel Flores pulled the Big Reds within four.

Muskegon struck again on a Caleb Washington touchdown run early in the second quarter, but Mona Shores quickly regained the lead as Jackson found Schuiteman on a 36-yard toss for a score.

Minutes later, Washington hauled in a six-yard touchdown reception from quarterback Shawn Pfenning to put the Big Reds back on top.

Mona Shores drove the ball down to the 14-yard line with 30 seconds remaining in the first half, then scored on fourth down when Jackson hit Broersma with a touchdown pass.

The extra point was blocked, then Flores kicked a 32-yard field goal for Muskegon, leaving the score tied 20-20 at halftime. 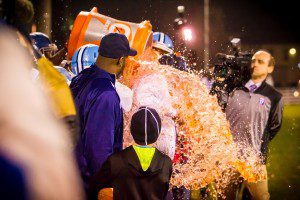 The second half belonged to Mona Shores. Broersma’s pick six set the tone. Jackson’s 60-yard touchdown pass elevated it. A dominating performance on defense sealed it.

Muskegon’s best shot at regaining traction came when Mona Shores held a 34-20 lead in the third quarter. The Big Reds were driving until a Washington fumble on the goal line ended up in the hands of the Sailors’ Noah Dykstra.

Minutes after the fumble, Jackson broke free on a 35-yard touchdown run to put Shores up 41-20.

Pfenning went 14-27 with 249 passing yards, one touchdown and three interceptions for Muskegon. The Big Reds rushed for 247 yards and two scores on the ground, including one late score from Pfenning.

Schuiteman hauled in eight catches for 150 yards and two touchdowns for Mona Shores, which had 268 total yards on the ground.