Zeeland East took an 8-0 lead into the second quarter after Dan Pohanka scored from 8 yards out with 6:22 left in the first.

Miguel Flores kicked a 27-yard field to cut the Big Reds deficit to 8-3 with 9:31 left in the second.

Quarterback Shawn Pfenning gave the Big Reds the lead for good on a 1-yard run with 6:18 left in the half for a 10-8 lead.

Pfenning was 7-for-9 passing with 125 yards and one touchdown.

Caleb Washington scored his first of two touchdowns with 5:58 left in the half, while Keonte’ Whiteside caught a 50-yard touchdown pass from Jacorey Sullivan with 3:55 left.

Alquan Evans closed out the first half scoring with 1:18 left on a 35-yard run to give the Big Reds a 32-8 halftime lead.

Evans led the Big Reds in receiving with 72 yards on two catches.

Cameron Copeland opened up the second half scoring on a 4-yard run giving Muskegon a 39-8 lead with 9:46 left in the third.

Washington added to the lead with his second touchdown of the evening from 11 yards out with 7:22 left in the third.

Talmadge Carter close out the third quarter scoring with 1:31 left on a 15-yard touchdown pass from Pfenning.

The 53-point onslaught came to a close in the fourth quarter on a 22-yard touchdown reception from Logan Dykstra from C.J. Otteman with 7:43 left in the game for Zeeland East.

Muskegon will look to stay unbeaten next week when it meets Reeths-Puffer. 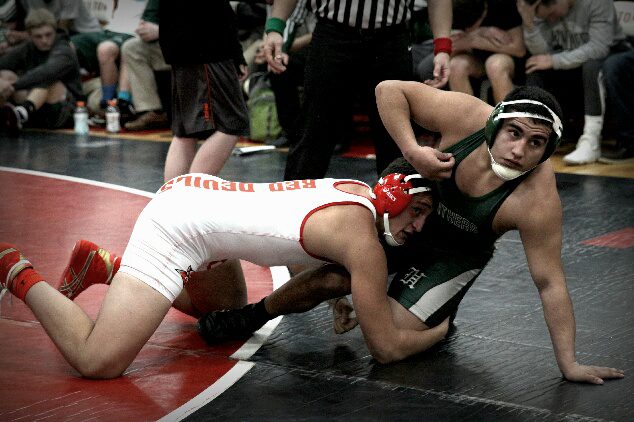 Christian Brooks: A North Muskegon student having a great wrestling season at Holton