MUSKEGON – If any team was going to score a goal against Western Michigan Christian in the Division 4 regional soccer tournament, it was Leland with its speed forwards.

And the Comets had a golden opportunity in the opening minutes of Saturday’s regional title game. 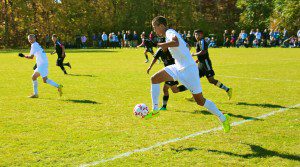 Ben Mast moves the ball for WMC as Evan Fless calls for the pass up field. Photo/Jason Goorman

A Leland player had a penalty kick from just a few yards out, following a tripping call against WMC.

But the hard, high shot bounced off the crossbar of the goal, then a shot on the rebound sailed over the goal.

After that the incredibly stingy Warrior defense went on lockdown, giving WMC its fifth straight shutout in the state tournament with a 5-0 win over Leland at Muskegon Catholic Central’s soccer facility.

Another victory would put Western Michigan Christian in the state finals for the first time since 2011, but Coach Dave Hulings wasn’t thinking that far ahead.

“We have a great group of kids and they’ve worked hard,” Hulings said. “We’re just embracing this moment and the fact that we’re going (to the semifinals).”

WMC’s defense was already making headlines coming into Saturday with four straight shutouts – three in district tournament play and one in Wednesday’s first round regional win over Harbor Springs. 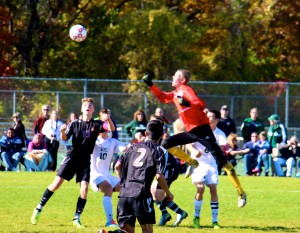 Goalie Michael Merz gets ready to punch the ball away for WMC. Photo/Jason Goorman

But Hulings was concerned about Leland, a team with a lot of speed and ball handling skills in its front line.

The Comets lived up to their billing in the first half, managing three more quality shots on WMC following the penalty shot that hit the crossbar.

But Warrior goalie Michael Merz was up to the challenge, stopping everything he faced. Then the defense took over in the second half, limiting Leland to just two shots on goal and very few quality scoring opportunities.

Hulings said his team had a special strategy to counter Leland’s speed, and it worked.

“They are very fast, and we had to defend in groups,” he said. “There was no way we were going to defend one versus one. We defended in bunches and it paid off.”

While the WMC defense is getting lots of credit, the Warriors also demonstrated a lot of offensive firepower.

They collected goals from five different players and outshot the Comets 16-6. The Warrior offensive attack was particularly dominant in the second half, outshooting Leland 11-2 and lighting up the scoreboard with four goals.

“We have a very balanced team with a lot of guys who can play all over,” Hulings said. “I never know who’s going to start.” 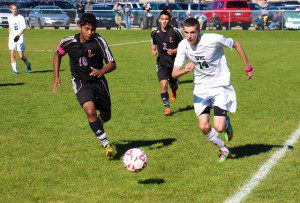 Eli VanderVelde chases the play along the side line. Photo/Jason Goorman

Senior James Sytsema got the only goal of the first half with 12:51 remaining when he chipped a ball past Leland goalie Ricardo Roman from close range.

WMC’s Ben Mast scored at 15:21 of the second half with a long, hard kick from about 30 yards out that found the mark.

Eli VanderVelde made the score 3-0 just over a minute later when he headed a ball over the goalie’s head.

The Warriors added two goals in the final eight minutes from Byung Jeong and Eric Bourdo, who scored on a penalty kick from close range.” 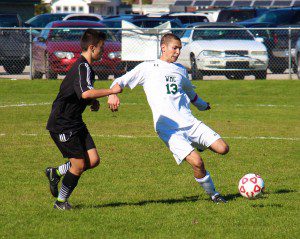 Eric Bourdo prepares to clear the ball during second half action for WMC. Photo/Jason Goorman

“We heard they had shut everyone down in the postseason,” Leland Coach Ryan Knudsen said about WMC. “We didn’t execute the way we planned to, but congrats to them, they still shut us out. They are very strong all over the field, not just on defense.” 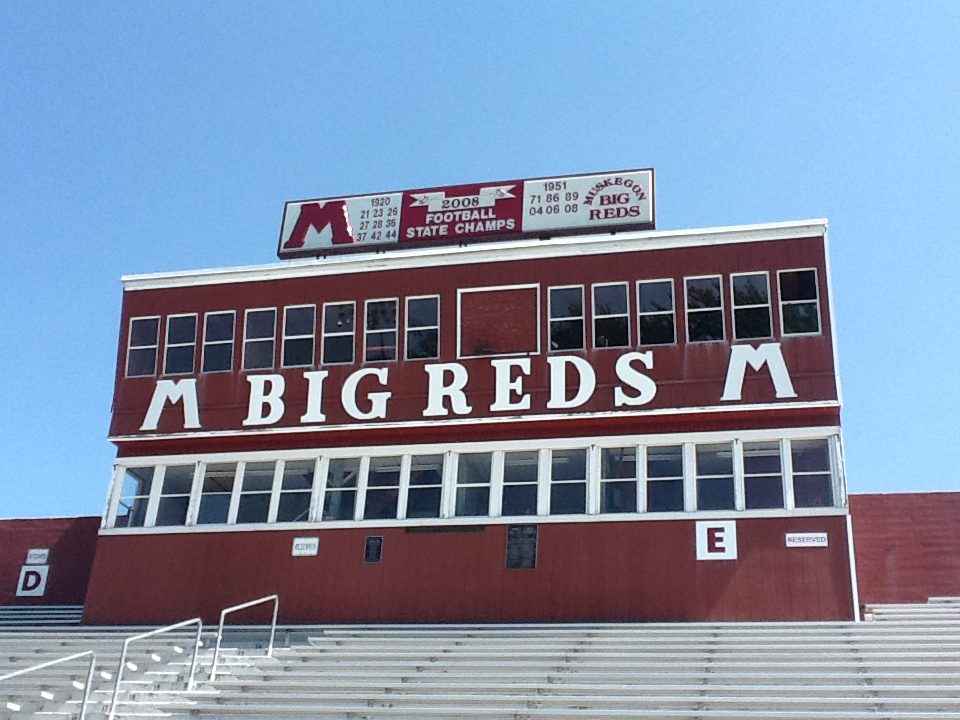 No. 2 Muskegon guns down No. 1 Lowell in Hackley Stadium showdown