WHITEHALL – The Whitehall Vikings will have a big challenge on their hands Friday in their Division 4 regional game against Grand Rapids South Christian.

The Sailors have a definite edge in playoff experience, with 12 postseason games over the past three seasons, compared to two for Whitehall.

And they’re no strangers to high-pressure games. The Sailors have been to the Division 4 state finals two years in a row, winning the title in 2012 and finishing as runner-up last season.

But the Vikings aren’t likely to be afraid of South Christian, or any opponent, for that matter.

After last Friday’s thrilling 41-36 comeback victory over Comstock Park, they have every reason to believe they can beat any team on any given night, if they put their hearts into it. 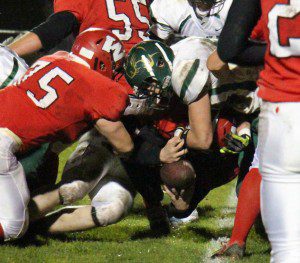 Whitehall trailed Comstock Park 30-7 in the first half and 30-13 at halftime in front of a disappointed home crowd. But the Vikings roared back in the second half to take the lead, then kept Comstock Park from scoring on fourth down from the five-yard line with 20 seconds left in the game.

Thommen scored the winning touchdown with three minutes left in the game.

If a comeback like that isn’t a confidence builder, nothing is.

“I’m just happy with the way our kids were able to play from the second quarter on,” said Whitehall Coach Tony Sigmon, whose team will meet Grand Rapids South Christian Friday at 7 p.m. at Byron Center High School. “It was a situation they weren’t used to and I think they were a little nervous in the first quarter.

“I think it gives the kids confidence as they move forward. They know if they find themselves in a hole they can come back. It really was a statement win for our whole program. I’m just glad this group of players was part of something special like that, after working so hard to turn the program around.”

Few observers would have guessed that Whitehall would be playing for a spot in the state semifinals this season after finishing a dismal 1-9 in 2013.

But they opened 2014 with six straight wins, endured a pair of ugly losses to conference rivals Oakridge and Ravenna, then rebounded to beat Grant, Spring Lake and Comstock Park over the past three weeks.

“(Losing the two games) was a learning experience for the players and coaches,” Sigmon said. “And against Grant, I think the guys came out nervous because they didn’t want to go into the playoffs with three straight losses, but then they settled in and played very well.

“The way they played against Spring Lake (a 14-0 victory in the first round of the playoffs), they felt like they could beat anybody. It was simply a matter of getting back to the point of winning.”

Sigmon thinks it’s important to challenge young players, regardless of how they fared in the past. The only way to achieve excellence is to make excellence a goal.

“We’ve preached to the kids that anything is possible,” Sigmon said. “We try to remind them that we’re going to be playing other high school teams, not college or pro, and anybody can be beaten.

“A lot of our kids, and probably a lot of people in the community, are probably thinking that we’ve overachieved a bit. But this is why we coach, to get kids into positions like this.

“I think when you challenge kids they can rise up to high expectations. They don’t really understand how good they can be.”

While he’s thrilled about his team’s success, Sigmon considers South Christian one of the top teams in the state, for a lot of good reasons.

The Sailors (9-2) lost their first two games of the season – to Grand Rapids Christian and Caledonia – but have been unstoppable since then.

They’ve outscored opponents 424-244 this season, and have scored at least 33 points in each of their nine victories.

South Christian won its two playoff games with ease, 35-0 over Allendale and 58-34 over Hudsonville Unity Christian.

South Christian is led by standout quarterback Jon Wassink, a Western Michigan University commit who the Detroit News called “one of the top dual-threat QBs in the state.”

Wassink lived up to that billing last weekend, rushing for 300 yards and five touchdowns against Unity Christian, and throwing for 105 yards and two more touchdowns.

“But I think our kids really believe they can beat them. We told them to think about beating one of the best players and one of the best teams in the state, what that would mean for their legacy and Whitehall football.

“It’s going to be a challenge and an opportunity.”