A much bigger trophy, with the words “state champion” engraved, would be a welcome change of pace for the Buccaneers, and maybe, just maybe, this could be the year they get one. 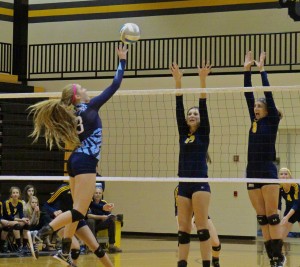 The Bucs, now 49-8 and ranked third in the state, advance to next week’s regional semifinals.

The district title is one of many for Grand Haven. The Bucs have now won eight consecutive district tournaments, and 13 of the last 14.

In 2012 they were state semifinalists.

Grand Haven, which finished second this year in the O-K Red, one of the top volleyball leagues in the state, looks like a team that’s ready to get over the regional hump and make a serious run.

“I’ve always said, any team that finishes near the top of the Red has got a shot, and I think we have a shot this year,” said Grand Haven Coach Aaron Smaka.

“This team is deeper, has more options, and is more balanced (than last year’s team). We’re also young in key positions, with five sophomores up and only three seniors.

“There’s a lot of things that would have to go right (to win state). We’re just going to take it one game at a time and see how things shake out.”

Mona Shores, the champion of the O-K Black Conference, saw an outstanding season come to an end. The Sailors were vastly improved from last season, going from a 24-22 record in 2013 to 37-11-1 this fall. 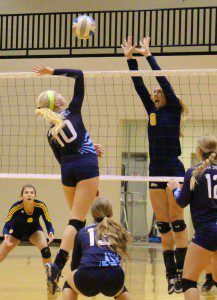 While they are clearly one of the best teams in the area, the Sailors still have a ways to go to compete with Grand Haven.

“”I thought we played very well,” said Mona Shores Coach Dan Potts. “We struggled at times with first touches – they have a lot of weapons.

“I’m proud of the way we battled. We could have packed it in but we didn’t. I thought that showed a lot of spirit and fortitude.”

Grand Haven had to fight to put away Mona Shores.

The Bucs led the third game by 11 points, 20-9, at one point. But the spirited Sailors rallied to within three points, 23-20, before Grand Haven scored the last two points to clinch the title.

The Bucs controlled the match with their power hitting game, nailing one unreturnable kill after another.

“We hit very well in system and out of system,” Smaka said. “Even when we’re out of system and the ball is coming from further back, we’ll attack. That’s part of our mentality.

“Kober was great tonight. When we needed a big kill she got a big kill. Monsma had some big hits as well.”

Cole also had 34 assists while Sophie Newhouse had 12 digs.