Lumberjacks rally for a 4-1 victory over Bloomington, despite injuries and sickness that have decimated the lineup 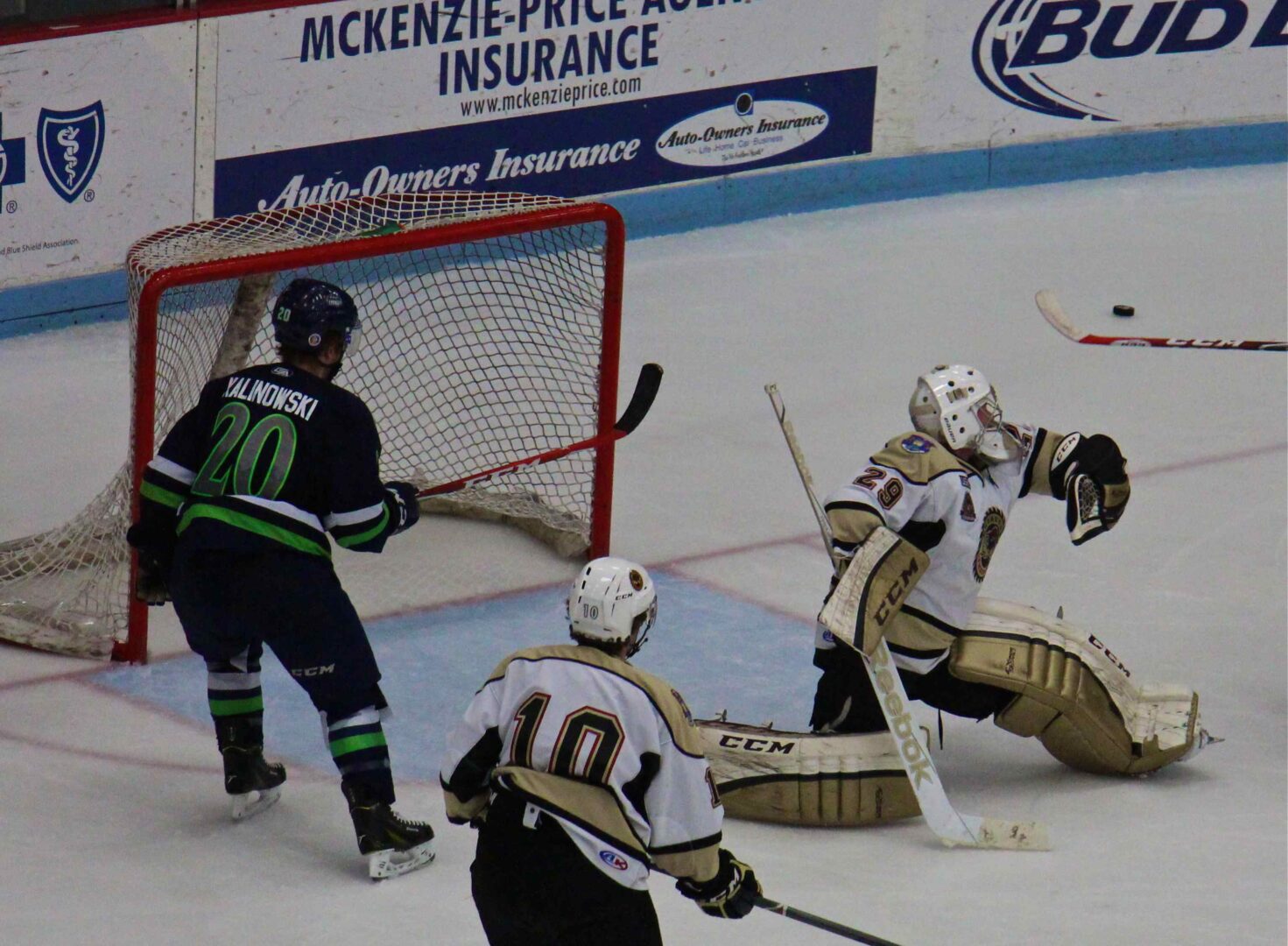 MUSKEGON – The Muskegon Lumberjacks had lots of excuses to lose a hockey game Saturday night.

Three of their top forwards are out of the lineup with injuries, and a bunch of players were sick this week with a bug going around the locker room. 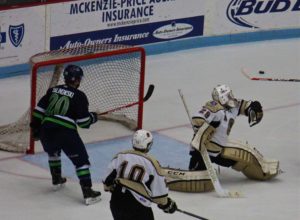 Eric Schierhorn posts the save in the third period for Muskegon. Photo/Jason Goorman

But the Lumberjacks, with several new faces in the lineup covering for the casualties, did what good teams do – salvaged a victory in a game they could have easily lost.

Matej Paulovic, Tom Marchin and Christian Wolanin scored third period goals to break open a tied game and give Muskegon a hard-earned 4-1 victory over Bloomington in front of 1,798 fans at L.C. Walker Arena.

The Lumberjacks improved to 10-4-1 on the season, good for 21 points in the USHL’s Eastern Conference. They entered the game one point behind Dubuque in a battle for second place in the conference.

The Jacks return to action Sunday with a game in Ann Arbor against Team USA. Two weeks ago the Jacks weren’t sure what to expect following injuries to key forwards Mason Jobst, Cooper Marody and Jack Rowe.

But the Lumberjacks are 2-0-1 since then, and showing no signs of letting their misfortunes slow them down. 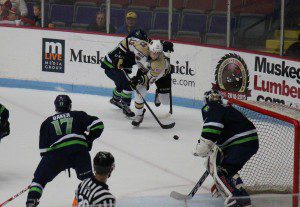 Griffen Molino gets ready to set up the first of his four assists on the night. Photo/Jason Goorman

The latest example came on Saturday, when they fell behind 1-0 after one period but still found a way to win.

“We started playing from behind but kept our composure, stuck to our game plan, went up a goal and things turned around for us,” said Muskegon Coach Todd Krygier. “I think Paulovic, Marchin and (Griffen) Molino really played great as a line tonight.”

Goalie Eric Schierhorn has been a huge plus all season for the Jacks, and he came through again Saturday, stopping 34 Bloomington shots. He was particularly tough in the second period, making several sprawling saves to keep the game tied headed into the third period.

The Thunder outshot the Lumberjacks 35-30 for the game.

“There have been two games (this season) that have killed his stats, but those were more of a team issue than a goalie issue,” Krygier said about Schierhorn. “Eric has been battling all season and he’s done a great job.” 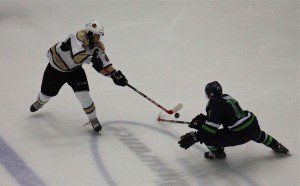 Bloomington opened the scoring at 16:39 of the first period with a goal by Alec Mehr.

The Lumberjacks tied the game late in the second period when Marchin tipped in a shot from Ryker Killins to tie the score 1-1. Killins and Molino were credited with assists.

Paulovic put the Lumberjacks in the lead at 6:34 of the third period when he took a pass from Marchin, faked out the goalie, then found the back of the net with a nice backhand shot.

Marchin and Molino got assists on the tally.

Marchin gave the Lumberjacks a 3-1 lead with his second goal of the night at 11:40 of the third, with assists from Molino and Paulovic.

Wolanin put the icing on the cake with an empty net goal with six seconds left in the game. 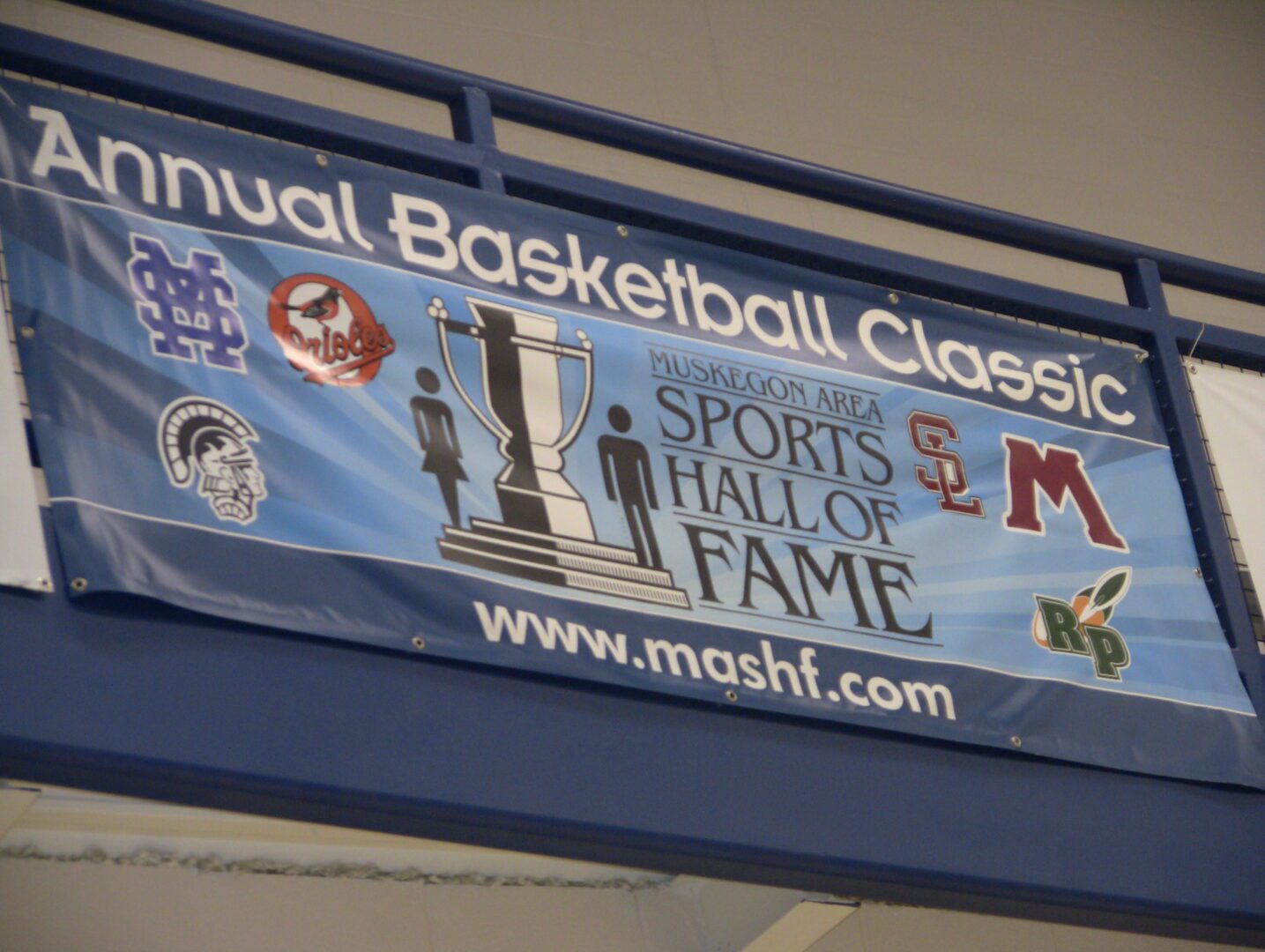