DETROIT – Mona Shores’ storybook football season wasn’t supposed to end up the way it did.

On Friday afternoon, the Warren DeLaSalle Pilots capped off their season with a convincing 44-8 victory over the Sailors in Division 2 state championship game at Ford Field.

The title was DeLaSalle’s first after two unsuccessful state final appearances in 2006 and 2008. Both of those games ended with losses to the Muskegon Big Reds.

It was far different this time around as the Pilots dominated from start to finish. Quarterback Joey Garbarino led the way, with plenty of help from running back Allen Stritzinger and a physical defense that stymied the Sailors’ high-powered offense throughout the afternoon.

“They are a really good football team,” said Sailor coach Matt Koziak, whose team finished 12-2. “I watched them on film and even back with their three losses, I thought they played well. What caught me on film is how physical they are. We got to see that first-hand today with their physicality and how they come off the ball.

“Our offense and defense have been relatively really good this season, but I thought they held both of them pretty well throughout the day,” Koziak said. 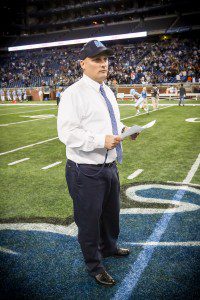 DeLaSalle (11-3) won the title after beginning the season with three losses in its first six games.

“I told the kids it’s now how many W’s you have, it’s who you play,” said Pilot coach Paul Verska, who earned his 100th coaching victory. “We play tough and we play physical. We just wanted to go in and play physical.”

The Sailors welcomed the return of senior quarterback Tyree Jackson, who suffered a dislocated knee cap in last week’s semifinal game, as well as backup quarterback and two-way starter Tyler Trovinger, who left the semifinal game in an ambulance after suffering a concussion.

However, star receiver/defensive back Hunter Broesrma, who was diagnosed with mononucleosis on Thursday, missed the championship game.

“I was feeling good today,” Jackson said. “I gave it my all.”

Jackson completed 10-of-18 passes in the opening half, but netted just 33 yards. For the game, Jackson completed 17 of 27 passes for 102 yards and a 12-yard touchdown pass to Trovinger in the latter stages of the third quarter.

The Pilots scored on each of its five first-half possessions, including three field goals by strong-legged senior Jake Townsley. He connected on field goals of 41, 23, and 29 yards.

Throw in a pair of touchdowns and DeLaSalle darted off the field at the half with a 23-0 lead.

Garbarino completed all three of his first-half passes and rushed eight times for another 28 yards. His quarterback sneak from 1 yard out gave the Pilots a 7-0 lead with 5:01 remaining in the first quarter.

“We call the plays in the huddle and he tells the guys to man up,” Verska said. “He’s like a fullback when he runs the ball. He does an excellent job.” 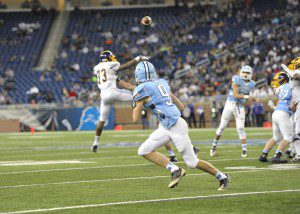 Tyree Jackson (3) goes to Matt Schuiteman (9) to the outside to keep their drive alive.

Garbarino completed all seven of his passes for 89 yards.

“He (Garbarino) scared us on film,” Koziak said. “He’s only a 10th grader and he’s going to be crazy good … he’s good now. What scared us about him was his toughness and that he’s fast. He’s a back who can kind of grind you out and if you give him a seam he’s going to get loose on you.”

After a pair of Townsley field goals, sophomore Allen Stritzinger broke free near the line of scrimmage and raced 55 yards for a touchdown. That TD came midway through the second quarter and gave DeLaSalle a 20-0 lead.

In the final minute of the half, Townsley connected on his 29-yard field goal.

The Sailors’ nightmarish first half started early as starting defensive end Zach Hellman limped off the field with a knee injury.

Any hopes of a Sailor comeback in the second half were quickly extinguished when Garbarino directed a 10-play drive that covered 66 yards and took 4:24 off the third-quarter clock. 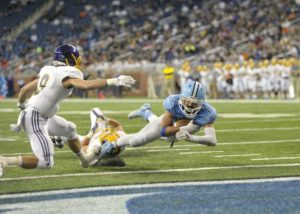 Tyler Trovinger (7) dives in for the MS touchdown on a slant pass from Tyree Jackson.

Mona Shores’ best offensive possession came on its next drive. Jackson completed four passes, including a 34-yard strike to Matt Schuiteman, to lead the Sailors down the field. It took 12 plays to reach the end zone. Jackson hit Trovinger on a slant route over the middle for the six-pointer.

That got the Sailors on the board, but made the score 30-8.

Garbarino scored from 8 yards out on the second play of the fourth quarter and the Pilots later scored on a blocked punt for the game’s final touchdown. Cooper Gammon blocked the punt and after the ball rolled round a bit toward the Sailor end zone, Austin Ballard scooped it out and stepped into the end zone.

DeLaSalle finished with 387 yards of total offense and limited the Sailors to 201.

“I just thought defensively they had a great game plan and they executed it well,” Koziak said. “Their kids played tremendous.”

DeOntay Moffett was the workhorse back for the Sailors. He finished with 85 yards on 18 carries. Darece Roberson caught 10 passes for 26 yards. Dom  Shermeta led the Sailor defense with 12 tackles and Trovinger had 10.

For the Sailors, the trip to the state finals comes just one season after qualifying for the playoffs for the first time just one year ago.

“To where we were and to where we’ve come, I told these kids there are 700 other schools who would trade spots with us today,” Koziak said. “Obviously, our kids are disappointed they didn’t win a state championship, but when they look back at what they’ve done for a community and a football program, they are going to be proud of what they were able to do.”