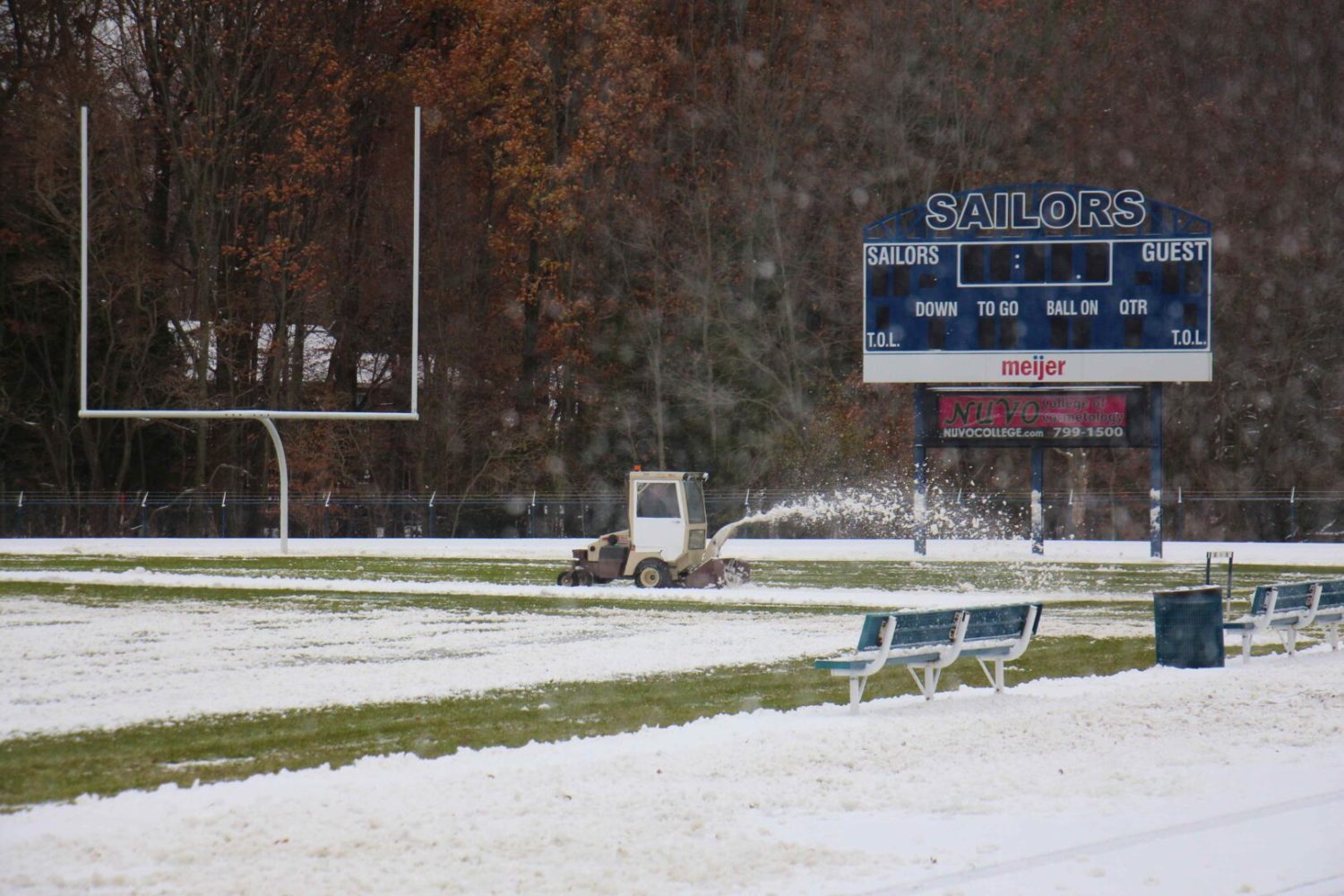 NORTON SHORES – For home field advantage to have its maximum impact, a team needs a big, enthusiastic home crowd.

And that crowd needs places to sit or stand comfortably.

Some Mona Shores parents are making sure that’s the case for tonight’s 7 p.m. Division 2 regional football playoff game between the Sailors and Battle Creek Lakeview.

Darece Roberson Sr. and other Mona Shores parents work to clear off the bleachers at Mona Shores on Friday morning. Photo/Jason Goorman

On Thursday, Mona Shores Athletic Director Ryan Portenga put out a call to parents or other interested residents to help with snow removal from the school’s football stadium.

The school will clear the playing field of several inches of snow that’s fallen since Thursday, but needed assistance with the bleachers and standing areas.

About 15 parents responded to the call Friday morning, with shovels and snowblowers in hand.

James Chick is a 1980 graduate of Mona Shores, is the business manager of the Blue Lake Fine Arts Camp. His son, Tim Chick, played on the Sailor junior varsity football team this fall, and was called up to varsity for the playoffs.

Chick had one personal leave day from work left this year, so he used it to help the school with stadium snow removal.

“I don’t think they were thinking about snow,” Chick said. “But it’s part of the game and part of Michigan. Talking to Timmy, he said ‘You know we’re practicing out in the snow, and these other teams probably aren’t. We’re ready for them.’”

Darece Roberson, whose son Darece Roberson Jr. is a standout two-way player on the Mona Shores varsity, was on hand with his snowblower, clearing out the mezzanine section.

“I gotta do my part,” Roberson said with a laugh. “My kid will be out here playing, so I have to make sure we have clean stands for the fans so we can sit and watch this game. We need this win.

“We sure weren’t thinking about snow when we made the playoffs, but we sure are ready to play. They are having a great season and this right here makes it even better. It lets the kids know the parents are putting in some work, too.”

Portenga was thrilled with the public response to his call for assistance.

“We knew snow would come around at some point,” Portenga said. “Obviously, I didn’t think it would come this early or when we were hosting. I thought maybe the semifinals wherever that’s played at, if we got that far.

“We’ve got some awesome parents here. There are people here I’ve never even met before. And there are people that have been just loyal Mona Shores community members for years, for decades. They have waited and yearned for a moment like this.

“Maybe it will stop snowing and we’ll get a break to get this game in and not have to worry about five o’clock and cleaning off the field and bleachers again.”