Muskegon Big Red Coach Shane Fairfield doesn’t care where his football team plays this Saturday. He’s just happy his team is still in the hunt for a state championship.

Muskegon was originally scheduled to play Zeeland West at Rockford in the Division 3 semifinals. But the 1 p.m. game was switched by the MHSAA to Greenville High School. 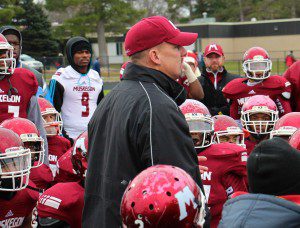 Muskegon Big Red Coach Shane Fairfield talks to his team after they topped Petosky for the regional championship. Photo/Jason Goorman

“From my understanding, Rockford got too much snow and they were concerned by the damage to the field from cleaning that much snow off of it,” said Fairfield. “And Greenville has the eight man football championships the day before and the field would be cleared off.”

Muskegon fans will have to travel a bit farther to see their team, but coach Fairfield is just excited his team is still in the hunt.

“The game is still played. Our kids are excited to play and we’ll play where ever they (MHSAA) want it to be played and I’m sure Zeeland West is feeling the same way,” said Fairfield.”We’re going to get outside and practice on Thursday. We’re in Shoreline one more day and then we’ll be outside no matter the weather on Thursday.”

“We’re in our third final four in four years. We’re just happy to still be playing.”

Photo gallery from the Muskegon Lumberjacks’ shootout win over Youngstown