HOWELL – No movie script could ever top what took place at Howell High School on Saturday afternoon.

Facing a 24-17 deficit with under five minutes to go in the game, the Mona Shores Sailors were in a pickle. Star quarterback Tyree Jackson was injured and out of the game, and the same was true for his backup, Tyler Trovinger.

That meant the Sailors had to rely on third-string junior quarterback Elijah Wilson to finish the Division 2 state semifinal game against Farmington Hills Harrison.

Wilson took over in dramatic fashion, throwing a 76-yard touchdown pass to Kobe Burse on a slant route with 4:11 left in the game. The touchdown brought the Sailors within one point of the Hawks, and head coach Matt Koziak had a tough decision to make.

Should he kick for the tie or go for two points and the lead? Koziak went for two. 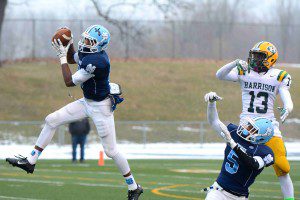 Kobe Burse comes down with a big interception late in the second quarter. Photo/Eric Sturr

The gamble paid off, as Wilson executed a play-action pass perfectly and hit DeOntay Moffett in the end zone for the two-point conversion, giving the Sailors a one-point lead. Then the Mona Shores defense clamped down in the final minutes, giving the Sailors a storybook 25-24 victory and their first ever berth in the state football finals.

Mona Shores will meet Warren DeLaSalle next Friday at 1 p.m. in the Division 2 state championship game at Detroit’s Ford Field.

“There was a lot of doubt,” Koziak said about his decision. “Here’s the issue, Tyree is our holder (on extra points) and our second-string quarterback is our backup holder, so we didn’t have any holders. So I called a time out and said ‘maybe this will work.’

“I don’t think you could ask for a better semifinal football game. The first time we made the playoffs was last year and now we get to go to Ford Field. I don’t think it will set in until Monday when we’re practicing again. It’s euphoric, I can’t explain it.” 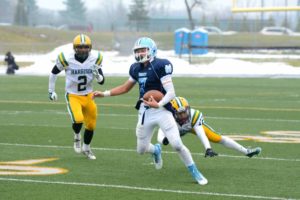 Backup QB Tyler Trovinger (7) keeps the drive moving with a first down run.

Wilson said he was overwhelmed by the emotions of having to enter such a big game, and the incredible outcome.

“It was a lot of nerves,” Wilson said. “I put a lot of trust (in Burse) and tried to throw a good ball. He did all the work from there.

Wilson was forced into Mona Shores’ biggest game in school history due to injuries that appeared impossible to overcome. Jackson, who is among the best players in the state, went down with a dislocated patella in the second quarter.

Then Trovinger gave everyone a scare when he went down and laid motionless on the field for 10 minutes in the fourth quarter. When the ambulance finally came out to take him to the hospital, he gave his teammates a thumbs up, which was a very good sign. 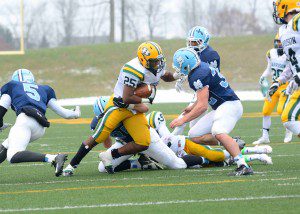 Trovinger never lost consciousness and had mobility with his arms and legs, according to team personnel.

That left the job to Wilson, and he couldn’t have performed better under extreme pressure.

“To win the way we did, losing our best player and then our backup comes in and plays his butt off and then he goes down,” Koziak said. “It’s funny, because we watched the movie ‘Lone Survivor’ on the way here, where they lose brothers and they lose each other, then this guy steps up and this group just cares about each other so much. Guys just step up and make plays.”

Harrison got the scoring started in the first quarter with a 30-yard field goal by Omaury Rodgers.

The Hawks struck again later in the first quarter. On a third-and-17, quarterback Jevon Shaw found receiver Iwarri Smith on an 83-yard touchdown strike to put Harrison up 10-0 with 3:58 to go. 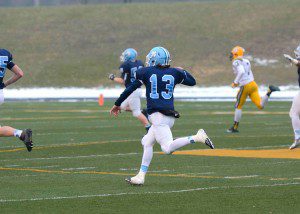 On the ensuing Mona Shores drive, Jackson ran 39 yards to the Harrison 13-yard line. On the next play, Moffett burst through the line for a 13-yard touchdown run, narrowing the score to 10-7.

The first quarter ended with Mona Shores forcing a safety when Harrison quarterback Chris Schuetz, who rotated with Shaw, who was playing injured, slipped and fell in the end zone. Harrison led 10-9 after one quarter.

Following Jackson’s injury, Trovinger came in and fumbled the first snap and the Hawks pounced on it. Moments later Harrison scored on a 10-yard touchdown pass from Schuetz to Michael Ojemudia. Harrison hung onto the 17-9 lead until halftime.

Matt Schuiteman got the Sailors rolling right away in the second half when he returned the kickoff to the Saior 47. Trovinger scored on a 1-yard touchdown run later in the drive, then hit Moffett with a two-point conversion pass, tying the game at 17-17. 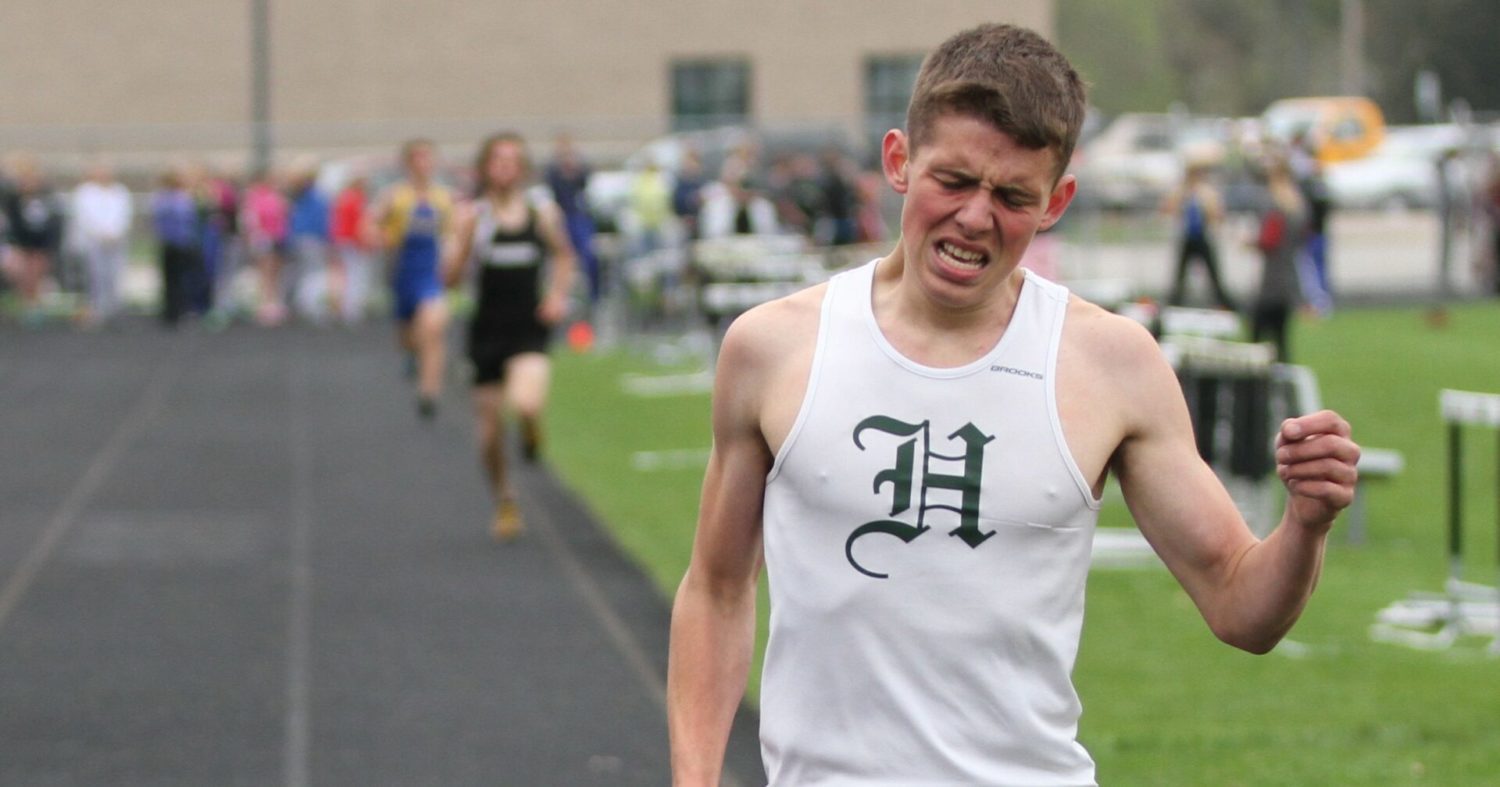