To make matters worse, the Vikings had to play Spring Lake Friday, with the imposing Kelsee Zuidema leading the Lakers. 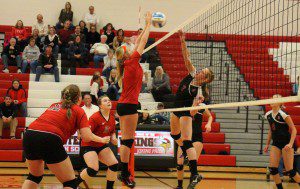 But the Whitehall girls responded to the challenge like true champions, using great defense, strong net play and some big kills from underclassmen to claim a 3-0 victory over the Lakers and claim the Class B crown on their home court.

Whitehall, now 34-15-3, will advance to regional play next week.

Brown, one of the best hitters around, watched from the bench during the title match with a severely sprained right ankle. It was known since Wednesday that she probably wouldn’t be able to play Friday.

It was more than a loss of talent for the Vikings – it was a mental blow to lose a top player in the midst of the postseason tournament.

But the players pulled together and became more determined to win, thanks largely to the leadership of senior co-captain Alyssa Myers, who rallied the troops when it mattered most.

“Alyssa Myers was phenomenal all week,” said Whitehall Coach Ted Edsall, whose team avenged a tough loss to Spring Lake in last year’s district final. “She pulled the girls together and made sure everyone kept their heads up. We couldn’t have won it without her.” 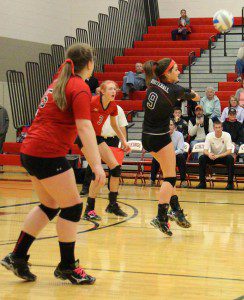 Lauren Lopez on the bump for Whitehall. Photo/Jason Goorman

“Julie is such an unassuming kid, she doesn’t realize how good she is going to be,” Edsall said. “We set her so many balls Wednesday (when Rachel Brown missed the semifinals) and we did it again tonight, and she did a great job.”

The Vikings major concern was controlling Zuidema, a physically imposing player who may have the most powerful shot in the area.

Zuidema had a great match, as expected, leading both teams with 15 kills, but Whitehall played great team defense and handled most of the other shots that came their way.

“That was part of the game plan,” Edsall said. “We knew (Zuidema) was going to get hers and we tried to eliminate everyone else. I was really happy with our back row play today. In the last month we have really played some great defense.”

The key for Whitehall on Friday was surviving the very close first game.

The Vikings jumped out to early leads of 9-3 and 16-9 and were seemingly in control. But Spring Lake roared back to tie the game at 21-21, and take 23-22 and 24-23 leads, before Whitehall won the last three points to preserve the exciting victory. 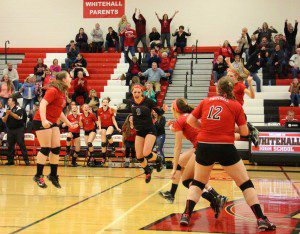 Julie Brown served two straight aces to clinch the win for the Vikings.

Whitehall led for most of the second game and cruised to a 25-17 win.

Spring Lake threw everything it had into the third game, taking leads of 4-1, 15-12 and 18-16, but the Vikings took control down the stretch with two kills by Melissa Shoup, one by Copley, and one by Brown on the final point, to seal the 25-21 win and the district title.

Myers had 25 assists and seven digs for Whitehall while Robin Gould led her team at the net with three big blocks.

Spring Lake finished with a 26-22 record this season.

Whitehall wins exciting come from behind 7-6 game over Coopersville