The Sailors took advantage of a Rocket team that struggled both offensively and defensively throughout the first half. 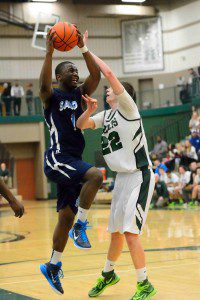 Shores’ D’Quintaye Ross (1) takes the ball in for a layup against Puffers’ Joey Olson (22). Photo/Eric Sturr

D’Quintaye Ross led the Sailors with 18 points and 10 rebounds while Kobe Burse had nine points and 12 rebounds.

The Rockets were led by Deandre Oakes-Owens with 14 points while Jordan Cooley added 11 points.

East Kentwood 65 Grand Haven 53 – Grand Haven, which dropped to 5-8 overall and 3-4 in the league, was led by Adam Abraham and Schaefer Thelen with 16 points each.