Taylor Richards, a senior All-State basketball player at Fruitport Calvary Christian, has been a standout since she started playing in grade school. 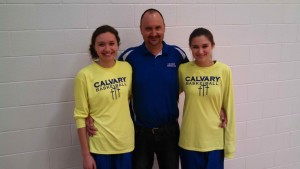 Her younger sister, Allyson Richards, is very good herself. In most families she would be regarded as the star athlete.

But year after year, Taylor was always a little bit better than Allyson. That’s hardly surprising, considering the two-year difference in their age.

But Allyson has never thrown in the towel when competing with her sister. She kept pushing herself to improve and match Taylor’s exploits, no matter how many times she came up short.

Finally, one day last summer, it all paid off for Allyson. 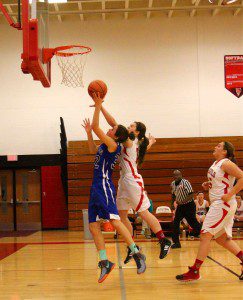 Taylor Richards goes in for the layup as Holton’s Shelby Younts goes for the block. Photo/Jason Goorman

The two sisters were playing one-on-one on their outdoor court at home, like they had a thousand times before. But this time it was different, because Allyson won, 10-9.

Their father, Brad Richards, was inside the house preparing dinner at the time. He got to hear all about the game, from two different perspectives.

“This one came in happy,” Brad Richards said, motioning toward Allyson. “The other one came in mad.”

“It was a big deal to me,” Allyson said. “I had always lost every other time in my life.”

Years of pushing each other have made both Richards sisters great basketball players.

Taylor, a senior who has already committed to playing college basketball at Cornerstone, recently eclipsed the 2,000-point mark in her varsity career, something few high school players accomplish.

This season Taylor is averaging a pretty incredible 31 points and 15 rebounds per game.

Allyson, only a sophomore, is very close to reaching the 1,000 point mark in varsity. This season she’s averaging 21 points and 12 rebounds per game 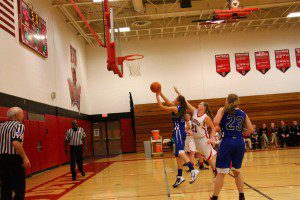 Allyson Richards goes in for the layup as Holton’s No. 21 Brandi Taylor tries to block the shot. Photo/Jason Goorman

The two have combined with their teammates to help Calvary Christian become one of the better Class D girls basketball teams in the state. This year the Eagles are 11-2 and a serious contender for state honors.

And the Richards factor won’t end at Calvary any time soon.

Next year, after Taylor graduates, Kelsey Richards, a standout seventh-grade player, will move up to varsity to join Allyson.

“She’s already tearing up in middle school,” Allyson said about her younger sister.

Building a winner at Calvary

Of course the team’s success has a lot to do with Brad Richards, who is also the Calvary Christian girls basketball coach.

Richards was an All-State basketball player at Western Michigan Christian High School and played at Cornerstone University, before beginning a long teaching and coaching career at Ravenna High School.

There was no guarantee that Richards would ever coach his children in basketball.

Richards and his wife, Joy, were married shortly after they graduated from Cornerstone, and their first three children were girls.

Richards said he never pressured his daughters to play basketball. But he did get them on the court at the Muskegon YMCA when they were small (playing against a lot of boys) and installed an outdoor court at home.

The sisters naturally took to the sport and have been working hard to improve most of their lives.

“We told them both that they could play any sport they wanted, but they were probably going to be tall, because my wife and I are both tall, and that can come in handy in basketball.

While Brad Richards remains a teacher at Ravenna, he took his coaching talents to Calvary Christian when Taylor reached the fifth grade and joined the school team.

Taylor was good enough to make the varsity as an eighth-grader, and Brad Richards was lucky enough to get the varsity coaching job the same year.

The job actually wasn’t open at the time, but the previous coach was gracious enough to step aside and let Brad Richards take the position.

The results have been spectacular since then. With Brad Richards coaching, Taylor pumping in a lot of points, and the entire team improving, the Eagles went 10-12 the first season and reached the district finals.

They went 20-4 their second season and reached the regional finals.

Allyson joined her father and sister as an eighth-grader two years ago, and the team went 19-2. Last year they were 20-4 and reached the regional finals a second time.

Even though Calvary Christian is a tiny school with about 70 students and a limited supply of athletes, the Eagles girls team has bulked up its schedule to play a lot of larger schools, and feel ready to compete with anyone.

They had a challenging game last week against a very good Class C Holton squad, and came out on the short end of a wild 89-70 decision. Holton led by 14 points midway through the first quarter and the Eagles could not recover.

The game was a learning experience for the Calvary girls.

“We had a lot of turnovers and didn’t break the press very well and got outrebounded,” Allyson said.

“We stepped out on the floor with a swagger, like they would fall like everyone else, and that didn’t pay off at all,” Brad Richards said. “That first quarter was a train wreck. We found out that if we don’t come out ready to play, we will lose.”

Brad Richards describes himself as a “fairly demanding coach,” so practice the day after such a disappointing loss was bound to be challenging for the players.

“It was intense,” Taylor admitted.

The Eagles displayed their ability to bounce back this week, starting with a Monday game against North Muskegon. They secured an 82-42 victory, with Taylor Richards exploding for 39 points and 24 rebounds and Allyson Richards adding 26 points and 10 rebounds.

While the two sisters are usually the high scorers for the Eagles, Taylor said it all comes down to a total team effort.

“I think we’re very team focused,” she said. “We really play together and try to pick each other up all the time. The goal of every girl on this team is to win every game, no matter what.”

The Eagles are eager for another crack at the state tournament. They’re not shy about talking about finally getting past the regional round and competing for a Class D state title.

“That’s our goal,” Brad Richards said. “We know the road and the teams we’re probably going to face every game (in the state tournament). We’re not going to back down from anybody. We think we have as good a chance as anybody to get through.”

The competition aside, all three of the Richards say it’s been special to experience varsity together.

“I think basketball has brought our family closer than anything else could have,” said Taylor, who added that their mother is in the middle of everything and is referred to as the “director of basketball operations.”

“Our younger siblings get to see us going through it and see the positive things we get out of it. It does get intense, but it’s something I value a lot and am very thankful for.”

Brad Richards said it’s a blessing to be able to blend his family life with his passion for basketball.

“The most important thing to me on this earth is my family,” he said. “God has blessed us by allowing us to do this together. Even after the tough loss (against Holton), we came home and watched Taylor being honored on TV as the WZZM Athlete of the Week.

“This allows us to spend a lot of time together, and it’s something we really enjoy.”