The West Michigan Lake Hawks fought from behind to top the Cleveland AM Pro’ers 115-112 on Saturday night at Reeths-Puffer High School.

West Michigan took its first lead with two minutes left in the game off a David Fox fast-break layup. The comeback reversed an 11 point fourth-quarter deficit. 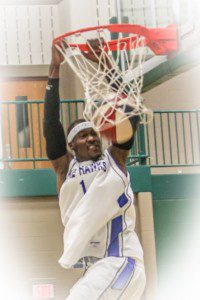 Will Wright goes in for the dunk. Photo/Joe Lane

“We struggled around the basket through the first three quarters, but didn’t make excuses,” said Lake Hawk coach Ronald Jenkins. “In the fourth our heart and desire to win came out and that was key.”

“He’s a strong inside player and we’ve been trying to get him to the basket all year long,” said Jenkins. “We worked the inside-outside game and Ralph was able to capitalize on it.”

Cleveland was led by Pooluah Anderson, who drained nine 3-pointers and a game-high 39 points.

“He would hit shots with a hand in his face no matter how close we got to him,” said Jenkins about Anderson’s performance. “In the fourth quarter we knew we had to deny him the ball and we were able to do that and disrupt their offense to get key stops.”

West Michigan played flat through the first three quarters and trailed 56-51 at halftime and 86-79 after the third. 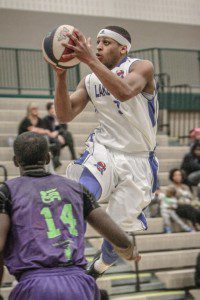 West Michigan’s JhaMonte Melton goes for the shot in the lane. Photo/Joe Lane

West Michigan shot 18 of 24 from the free throw line on the night and improved its record to 11-4 on the season.