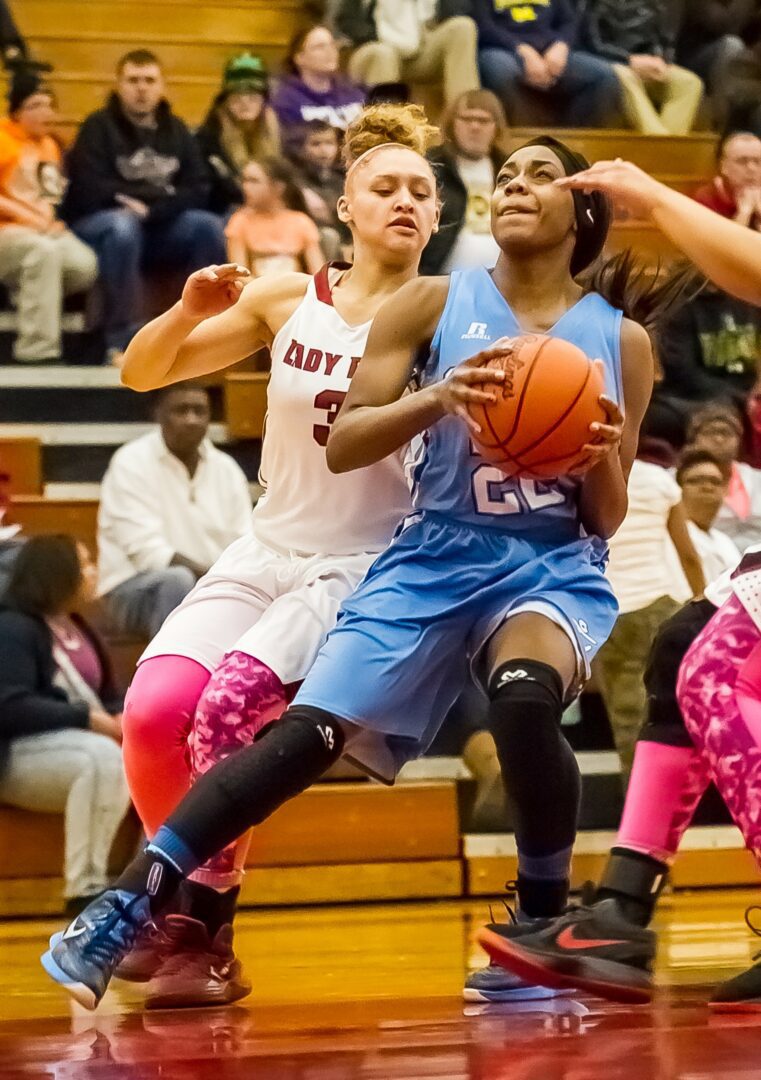 MUSKEGON – When a big game is on the line, the Mona Shores Sailors know they can usually count on Jordan Walker.

The standout sophomore guard grabbed a key rebound with one second remaining Friday, then calmly hit a pair of free throws, to help the Mona Shores girls basketball seal a hard fought 50-47 victory over Muskegon in O-K Black Conference action. 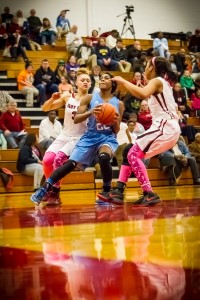 The victory kept the Sailors in the league race with 5-2 conference mark, one game behind Reeths-Puffer. Mona Shores is 14-3 overall.

Muskegon dropped to 7-8 overall and 3-4 in the conference.

“We just persevered when things weren’t going our way,” said Mona Shores Coach Brad Kurth. “We did enough to get the win in crunch time. It was just a battle and whoever made the last shot was going to win it.”

The game came down to free throws down the stretch. Mona Shores made just one field goal in the fourth quarter, but converted 10 of 14 from the line to close out the Big Reds.

The two biggest free throws came from Walker at the very end of the game.

Muskegon, down just one point at 48-47, forced a jump ball and gained possession with eight seconds left. Montaijah Kitchen got a good look at the top of the key, but her shot bounced off the rim and into the arms of Walker. 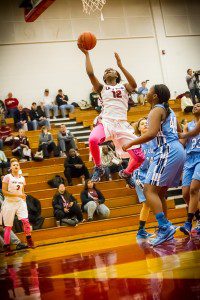 Mardrekia Cook drives to the hoop for Muskegon. Photo/Tim Reilly

Walker was fouled and hit her free throws to ice the victory.

“We knew what Muskegon was going to bring,” Kurth said. “They’re a good team, their record does not reflect how good they are. Credit to them, we knew they would be good on their home floor.”

The Big Reds’ full court pressure forced turnovers, which allowed them to get out in transition early in the first quarter. Muskegon ended the opening quarter on a 7-2 run to take a 13-10 lead at the first buzzer.

Mardreika Cook scored seven points in the first for the Big Reds.

Mona Shores fired back in the second quarter, going on quick 6-0 run early in the frame and taking the lead for good.

The Big Reds managed just six points in the quarter, all scored by Cook. Mona Shores took a 22-19 advantage into halftime. 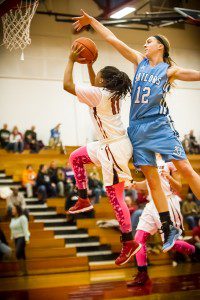 Muskegon’s No. 11 Tasheyanna Wyrick drives to the hoop while Kelsey Wolffis skies for the block photo/Tim Reilly

Walker and Tumblin led the Sailors with 13 and 11 points, respectively.

Cook led all scorers with 23 points while Williams tacked on 10 for Muskegon.

Big Reds get a big scare, but pull out a 42-35 victory over East Grand Rapids