North Muskegon boys get revenge for an earlier loss, race past Oakridge 70-53

NORTH MUSKEGON – In the hotly contested West Michigan Conference boys basketball race, every game counts and each win is more important than the last.

With each team sporting 5-3 conference records, Oakridge and North Muskegon faced off Tuesday in a game that meant the difference between third and fifth place. In their last meeting, in December, Oakridge won at home by 14 points. 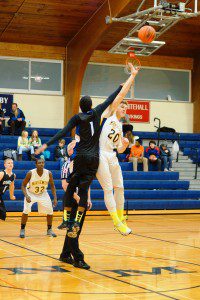 Marco Visconti gets up for the opening tipoff against Oakridge’s James Cooper II. Photo/Sherry Wahr

This time around, however, North Muskegon jumped out to a 29-5 lead after the first quarter and never looked back, earning the victory 70-53.

Norseman senior Ben Gautraud led the way in the critical opening frame with eight of his team high 15 points.

“I don’t know if we caught them off guard or what,” said North Muskegon coach Chuck Rypstra, after his team improved to 6-3 in the WMC, two and half games back of league leader Shelby. “We knew they were going to press and we were ready for it.

“We passed the ball well and got layups against their press. When their press isn’t going, they have to change something, it’s just so tough for them to come back when it gets to that point.”

The Eagles did not give up after the rough first quarter.

They cut five points off the deficit by halftime and trailed 36-17 at intermission. Oakridge outscored North Muskegon 36-34 in the second half. 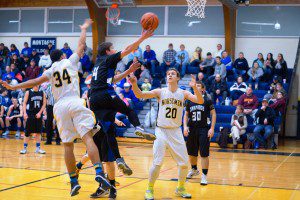 Hunter Benson goes in for the layup as North Muskegon’s No. 34 Vernonell Smith and No. 20 Marco Visconti contest the shot. Photo/Sherry Wahr

But it wasn’t nearly enough to make up for the rough start. 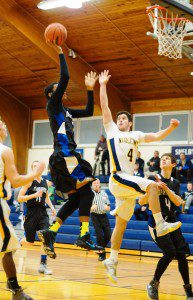 James Cooper III goes in for the layup as Oakridge’s Benjamin Gautraud goes for the block. Photo/Sherry Wahr

On Friday the Norse will try to turn the tables on another team they lost to earlier in the season, second-place Mason County Central. MCC took it to North Muskegon 57-41 in their first meeting of the season.

Junior guard James Cooper III led Oakridge with 21 points, including four 3- point baskets. Hunter Benson had 19 points on the strength of three 3-pointers and 6 of 7 from the free throw line.

Oakridge will face Hart on Friday.