MUSKEGON – When it comes to the intense rivalry between Oakridge and Shelby in girls basketball, a win is a win, regardless of the margin of victory.

Particularly with a league title on the line. 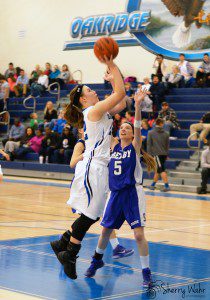 Earlier in the season Oakridge got a convincing victory on Shelby’s home court. On Thursday, in their own gym, it wasn’t nearly that easy for the Eagles.

But Oakridge held on for an exciting 41-40 victory over the Tigers and clinched the West Michigan Conference title in the process.

The Eagles, 14-3 overall, remained perfect in the conference with a 12-0 record. Shelby, in second place in the league, fell to 9-8 overall and 8-4 on the conference.

Shelby had a chance to ruin the Eagles’ championship celebration in the final seconds of the game.

The Tigers were forced to foul with 17 seconds left and trailing by one point. Oakridge missed the first free throw and grabbed the offensive rebound, but turned the ball over on an over-and-back call. 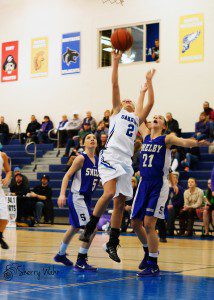 Emily Jacoutot goes up for the Oakridge shot. Photo/Sherry Wahr

Shelby called time out and set up for the go-ahead shot. But it missed the mark as time expired, allowing the Eagles to escape with the narrow win.

Oakridge coach Terry DeJonge said he told his players during in the last time out that they had one possession to win the game.

“I tried to stay positive so that we would play loose,” DeJonge said. “I said that we had to move our feet (on defense) and that is exactly what McKenzie Davis did on their best scorer.”

The Eagles led throughout the contest, but couldn’t nail down the victory until the bitter end.

Senior Shelbe Wilde picked up her third foul early in the second quarter and was forced to the bench. That allowed Shelby to go on a 7-3 run, but the Tigers still trained 21-18 at halftime. 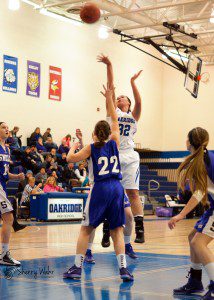 The two teams traded baskets in the third quarter and Oakridge led 36-32 at the buzzer.

Shelby had an 8-5 edge in the fourth quarter, but couldn’t get the final shot to fall to complete the comeback.

Despite the loss, Shelby Coach Sarah Wolting noted that she has a very young lineup that should do very well next season.

“If I can start two freshmen and a sophomore that is huge and the future is most definitely bright,” Wolting said.